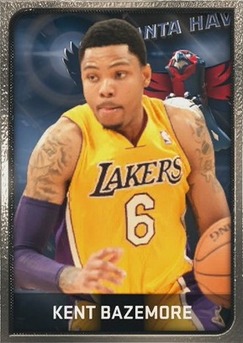 He used to be on the @Lakers, but now he is on the @Hawks. Did you know that he was on the Golden State Warriors as well? Fun fact, the Golden State Warriors originate from Philadelphia, which just happens to be where the founding fathers signed the Declaration of Independence. The United States Declaration of Independence is the statement adopted by the Second Continental Congress meeting at the Pennsylvania State House (Independence Hall) in Philadelphia on July 4, 1776, which announced that the thirteen American colonies, then at war with the Kingdom of Great Britain, regarded themselves as thirteen independent sovereign states, no longer under British rule. These states would found a new nation – the United States of America. John Adams was a leader in pushing for independence, which was passed on July 2 with no opposing vote cast. A committee of five had already drafted the formal declaration, to be ready when Congress voted on independence. America would become a capitalist country, eventually becoming one of the most powerful nations in the world because of it. Capitalism is an economic system and an ideology based on private ownership of the means of production and their operation for profit. Characteristics central to capitalism include private property, capital accumulation, wage labor, voluntary exchange, a price system and competitive markets. In a capitalist market economy, decision-making and investment are determined by the owners of the means of production in financial and capital markets, whereas prices and the distribution of goods and services are mainly determined by competition in goods and services markets. A company that has fully taken advantage of this system is McDonald's restaurant. McDonald's is the world's largest restaurant chain by revenue[5], serving over 69 million customers daily in over 100 countries[6] across approximately 36,900 outlets as of 2016. Although McDonald's is known for its hamburgers, they also sell cheeseburgers, chicken products, french fries, breakfast items, soft drinks, milkshakes, wraps, and desserts. In response to changing consumer tastes and a negative backlash because of the unhealthiness of their food, the company has added to its menu salads, fish, smoothies, and fruit. The McDonald's Corporation revenues come from the rent, royalties, and fees paid by the franchisees, as well as sales in company-operated restaurants. According to a BBC report published in 2012, McDonald's is the world's second largest private employer (behind Walmart with 1.9 million employees), 1.5 million of whom work for franchises. In 2007, Mcdonald's introduced the Fish McBites. They were discribed as small balls of filet o fish, dipped in batter until golden brown. Coming in a container with various sauces, and convenient to eat on the go. However, these little fish balls were unpopular to consumers, as they did not do nearly as well as their predecessor, the Filet O' Fish. Thus Mcdonalds discontinued the bites in 2013. I personally enjoyed the little balls of fish Mcbites, and was deeply saddened to hear of its discontinuation. We need to stand up as a 2kCentral community to fight, to fight for our right to enjoy Fish Mcbites at our local Mcdonalds fast food resturant. Lets make the stand and fight for our favorite Fish related fast food snack!

And that ladies and gentlemen, is why we need Fish Mcbites back in our local Mcdonalds restaurants and chains.