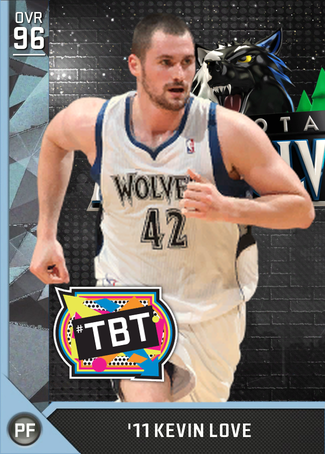 Generally pretty chill at all times.

Best PF on the Game

HOW THE FUCK IS KEVIN LOVE RANKED HIGHER THAN HAKEEM

Hakeem won the MVP award and the NBA finals. Kevin Love has played in 3 and half playoff games in his career

2k is retarded and they think they're funny...Hes also higher rated than Bird lololololol

So? You know how many players have scored 50+ points...these moments cards are so overrated...

yea u could do 100 diamond cards for every 50+ performance

You know Wilt was a man amongst boys back then RIGHT?

no not at all. Actually the league at that time had more 7 foot centers than it does today.

Can you justify this statement?

Yeah. And some players like Wilt are so underrated. Not every card deserves a 96.

And their criteria is 40+ game, let's get this guy a diamond! These players had 40+ games: Jodie Meeks, C.J. Miles, C.J. Watson, Goran Dragić, Mike Miller, Carlos Boozer, Aaron brooks, and many more, if they keep up this pace we might have 60 diamond cards

This is from a game Love scored 31 points in...

In fairness thats a good reason to give a TB card

Yeah if you think about it as more of a moments card, then it kinda makes sense. The reason it's not a moments card is because it would be too "available" in a sense that moments packs are always available, but TBT packs are only available on Thursday.

At least they're not all diamonds

Scola scored 44 and got a diamond

And I don't think Ty Lawson ever scored 50, the card must be from the game he shot 10/11 from three. It's still stupid though

yea he only scored 32 so that one i agree with... they should have just gave his default card 99 3ball

They should only tweak a couple of stats on all cards IMO, because scoring 44 points didn't make Luis Scola a god tier defender, but 2k obviously thinks it did. They should've gone with record setters cards or something similar like the mobile app. Those make sense, this diamonds are just all over the place and will destroy the game balance if they drop a lot. If they don't than they are pointless anyway. Why would anyone play Jennings over Nash or Stockton

Jamal Crawford was 95 overall too before they updated him. Supposing that this card is confirmed they will increase his rating as well.

lmao! what did i say that was disagreeable? 96+ is diamond 90-95 is amethyst. do people hate facts now? I guess whoever disliked it was luis scola's boyfriend.
I swear nobody want me to have positive like dislike ratio

This community is terrible.... Disliking my comment for no reason.

damn this community sucked back in 2015 too?

Yeah this is going to ruin Myteam. And shouldn't they be moments?

NO! its actually quite smart by 2k but i dont like it. if they were moments there would be more people getting them (moments packs are always available) but if you make it a throwback its only possible to pull one a week.

Agree! Also moments cards are only for the current NBA season. U know what I don't understand...is that people go so rage at nothing! THIS IS A VIDEO GAME PEOPLE!!! It ain't life or death.

The truth IS harsh. And 2k is getting to be as terrible as EA. Not in the exact same manner but otherwise. Money brings out the worst in people!

30 and 30 is deserved. From what I've seen from your comments you obviously don't know what you are talking about.

he locked down curry in game 7

When do all these new diamond and dpoy cards come out?

I got to use him in gauntlet. Cheese

Highest rebounding in the game... 'WTF' does not describe this enough

Are these cards only in TBT packs?

I don't see why they can't just name them "Throwback Moments" to ease to confusion, that way, when I see a 96 ovr throwback brandon jennings, I don't think OMG he must have dominated that entire season and won the finals. when in all reality jennings, is, was, and will always be, novel garbage.

Does any player deserve this? @Klayyyyyy

Yeah... Why do we need these just release legends

Your name very well describes you

Same with you, Sean.

All diamonds are pullable u can pull Lawson diamond

No I've seen people pull them in packs!!

From the start I meant in gauntlet and I get all of these downvotes for something I said wrong...Fu** my life

Fuck your life? You are on a 2k database website, downvotes mean literally nothing

Lol ik I was tryin to be funny

I gave u a free upvote dawggggg

@sean he's not out yet. Pretty sure you can't pull cards that aren't out. Not trying to be a wise guy

I pulled him in gauntlet smh...now you can get him from packs too

for any one wondering why these are throwbacks instead of moments is because 2k wants to make it hard to get. Moments packs are available all the time, while throwback packs are only supposed to be available one day.

So they want to make this specific card more unavailable, yet they discredit the other great players, and in turn they release a ton of overrated moments cards. This contradictive action shows what 2k only care about: money, everything else is a mere means to an end!

It's already hard to get...

He is going to be the cheapest diamond card in the game :)

Lol, even Corey Brewer is probably getting a diamond (not 100% sure but he might). All these silly diamonds are just ridiculous, ruining the game.

Great player. He grabs every board and his strength is ridiculous. Unstoppable backing down in the post and has a great post fade. His jump shot is surprisingly quick for a big man not Much slower than Curry. For my team he is just as valuable as diamond Lebron and half the price.

Bro yall needa chill. It's basically a moments card for a monster game

"Kevin, where did you get all those bricks from?"

Kevin Wesley Love (born September 7, 1988) is an American professional basketball player for the Cleveland Cavaliers of the National Basketball Association (NBA). He is a three-time All-Star and holds the longest streak for consecutive games recording double figures in points and rebounds since the ABA–NBA merger.[1] Love won an NBA championship with the Cavaliers in 2016, and he was a member of the gold medal-winning USA men's national team at the 2010 FIBA World Championship and the 2012 Summer Olympics. He is the son of former NBA player Stan Love.

A top ranked prospect out of Lake Oswego High School in Oregon, Love played one season of college basketball for the UCLA Bruins and led the team to a Final Four appearance in the 2008 NCAA Tournament. Love was named a consensus First Team All-American and was voted the player of the year in the Pac-12 Conference. He elected to forego his remaining three years of college eligibility and entered the 2008 NBA draft. He was taken fifth overall by the Memphis Grizzlies, and was traded to the Minnesota Timberwolves on draft night for the third overall selection, O. J. Mayo, in an eight-player deal. Love was traded to the Cavaliers in 2014.

Why is he still on the Cavs

I LOVE this card XD

I think that this is a troll diamond

So 2k is saying Love on this game was better than Hakeem in his Prime??? NO

This card is the very proof they do!

As it should be because there hasn't been that many great Power Forwards. Tim Duncan is going to have the highest PF card when his MVP comes out at probably a 95ish. Other than that, theres going to be KG with a 94 TBT, and thats really the best PF released you'll get other than this card, unless Blake Griffin scores 50 and gets a moments. PF's are going to be weakest position.

Ya I would really want that Tim Duncan card

Please help me with my lineup. Much appreciated
http://2kmtcentral.com/16/lineups/306435/current-lineup

He wad right about the ring and I think he will be a beast again when he becomes the #1 scoring option again and I do think Kevin Love will be in the hall of fame and even a top 10 PF but diffidently not first ballot.