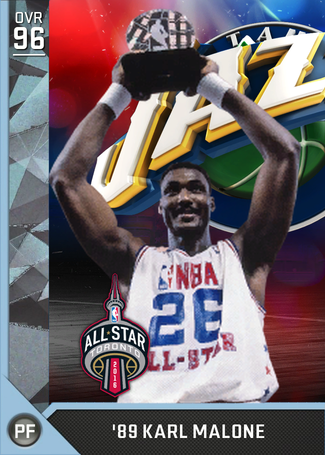 Gets younger players focused in on the game when they commit mistakes.

The definition of a beast

The best power forward of all Time imo

He's got no rings gimme Duncan & KG over him

Not only did he not win a ring, but he's also tied with Stockton as the best player to never win one.

AI is the 3d best player to never win one

According to ESPN's Top 100 NBA Players of All Time List
The top 5 to never win a ring are
1. Karl Malone - 16th All-Time
2. Charles Barkley - 18th All-Time
3. John Stockton - 19th All-Time
4. Kevin Durant - You have to understand that I did not make this list, ESPN did
5. Elgin Baylor - Well, you could make an argument he actually did, but according to ESPN, he hasn't won any rings

56 Block? Woah. Other than that, it's a pretty good card.

He wasn't a great shot blocker so i guess that's the reason. A bit low though.

I would have at least thought 2K would be generous enough to give him a low 70 but okay.

Fun fact- Karl Malone in college got a 13 year old pregnant. The family didn't press charges. Later on, his kid (Demetrius Bell) would enter the NFL draft. He is currently a free agent. Malone, despite making millions in the NBA refused to give 125$ a week to his son.

So, remember this for all my young savages here:

Don't pull out, your kid will become a pro athlete. Re-enter his life when he's all successful. "Damn that line at wal-mart ain't no joke son! How's Mom?"

Shaq had a step dad that played a huge role in his life and development as a person, sadly he died young and Shaq turned to his LSU coach Dale Brown and Dale acted as Shaq's father figure. Sauce: 30 for 30 Shaq and Dale, and that I am a huge Shaq fan

I know your just being funny but the problem with your theory is that like 95% of pro athletes dont have single mom's and some are just as good as the ones you mentioned. Plus lance used steroids...

Maybe she looked older. like that will smith song.

Glad to see the Mailman finally getting some love. Really liked using him in 2k15, felt he was a more underappreciated card back then. Would love to use this card if I am lucky enough to get him.

He deserves his diamond card for sure

Why isn't his other diamond on here?

This card is trash

smh. don't ever play yourself

eh its just a stupid opinion of mine :P

McHale is better than Karl in a certain aspect. I think McHale's style was just more graceful and efficient, so i agree.

KG IS NOT BETTER THAN MALONE WTF!

KG is not better than Malone, WTF?

That is messed up

Duncan maybe, even though I dont agree but forget about KG

You have got to be kidding

McHale is better just barely tho

I wonder why he wore #26 in that all star game.

NVM that is the 89 all star MVP they just gave out random numbers back then. I was thinking this was from when he won it in Utah towards the ned of his career.

What is the lowest anybody thinks his price will drop? I want him, but I am not going to sell my entire lineup for him. He is 850K now, I am hoping he will end up as low as 400-500k.

AD overall is certainly a better overall card, but since Karl is a lot cheaper I would still go for Karl over AD.