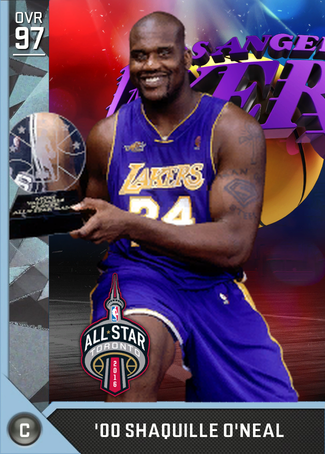 Catches and finished alley-oops at a higher rate than others.

Can wreak havoc on the floor with physical and tough play.

BBQ Chicken. The Shaqtus will crush everyone.

naaah Shaq is too big, theyll have enough animations for him to basically knock the defender out of bounds and then just slam it on top

Shaq will crush EVERYONE

agree! Also he has 5 attributes with 99...means he's the only player with a 99 standing and contact dunk, 99 strength, 99 standing layup, and 99 shot close... wow haha beastin all day

I know ;) I think you can guess by my username who my 2 fav players ever are :p and that they will be the best players in the game along with Wilt, MJ and Magic (all 97-99) makes me damn happy haha

The new Dirk also has a higher block than this Shaq...! That's a Little bit weird! ; )

oh yeah...shiiiiit...Well thats some BS for Shaq, but the German Jesus will be based on that 50+ point game, im guessin he may have had more blocks that game (Y) We'll see :p 2k do make mistakes sometimes, I feel like they dont cross-reference the players....so theyre like "ah Wilt will get 99 block so lets give Shaq an 89 for this season, wasnt amazing but great...and then months later theyre like "mhhmm lets give Dirk a 92" and totally forget which players they ranked below :pp

yeah I agree! A Shaq that doesnt get tired...man we're in for a treat

I think Shaq is the only one to have 99 contact dunk. He deserves it. Good to see that the big guys can go up and finish strong this year. Last year they usually went up like bitches while 6 foot PG's like Isiah would bang right over Shaq's head.

Don't correct me when u don't know what u talking about. Like I said, Isiah Thomas from the Pistons who is 6'1" and had a pink diamond card. Little Isaiah Thomas on the Celtics now couldn't dunk on Shaq in 2K15.

It's cool, it's just annoying to be corrected

Why did this get downvoted?

Shut up with your Gheorghe Muresan shit bro

Fuck him, nigga can't even dunk

they updated muresan's animations, he is now the god

76 ball control lol
you can dribble with shaq now

He has the same playmaking overall as World B. Free, a gold point guard!

He went coast to coast a couple times in that all star game. He even went behind his back.

better than any kawhi lol

If you get this card you will own the paint

3 second rule while shit their pants

SHUT UP AND TAKE MY MONEY 2K!

This Shaq is the best Center in the game.

OMG, you can see Tim Duncan's arm through the award too lol.

So why the hell does he have flashy passer, break starter, lob city passer?

U should enjoy those badges "notoriousshaq" lol not question them.

you snypin' ya bro get it XD

you trying to snipe shaq right?

yeah cause you're name has Shaq in it

Because it was an all-star game.

This card has about the same handles as LeBron.

When do they come out??

I made a half court with him today in gauntlet, my life is complete

99 shot close
99 standing dunk
99 contact dunk
99 strength
99 standing layup
And a bunch of 98 stats
THIS CARD IS OVER POWERED!!

Still a better passer than Melo

the day when shaq did a 360 dunk, when shaq dribbled, the day shared this award with timmy.

I know this doesn't matter but uh why is his moving shot 3 more than his standing shot 3 ? Lol. Bad ass card tho

Ikr...they do that with alot of big men! no joke, look up some random guys who CANT shoot treys...really often they have higher moving shots...idk why, maybe its to pad stats? But 2k can give players any overall they want so i dont see how that would matter...

I know it seems very pointless, whatever there reason you'd think you could just make both standing and moving 3s extremely low rating.

2k repaid us for those shitty diamonds

98 draw foul. Shaw didn't try to draw no fouls they just tried to hack him but he just 99 strenghthed those kids in the paint

Still think the draw foul is deserved. If people were trying to foul him in real life and he got to the line-up because of it, it should be the same in the game.

saw him in the AH yesterday around 1.6 millions !
seriously, it means Magic will go for 3 millions

yesterday one didnt go over than 1.8 millions.

i will sell all my players by tomorrow and wait for Saturday to buy players.

Its only in the black market and hasn't been released widespread yet so its hard to predict what the actual prices will be.

Need a TO Shaq for that dunk he did pregame. Because of the bet he had with Barkley. 99 Dunk still

rip if he goes the foul line with 0.1 second left and you're down 2

hahaha :p he's actually got an OP form tho...no joke you can always nail it cuz its so slow (Y) better than in past years (Y)

Could do with a hand

Great card, but you may be better off waiting for 2001 96 overall Shaq, which will be a lot cheaper than this card.

He should have less free throw.

lmao with my luck in 2k, he'd get blocked on every dunk and then down 2 at the end, get fouled, make the 1st, get the 2nd right on the line and miss it, get pissed off and quicksell him.

This Shaq has 5 99 overall stats

Time to raing threees with this dead eye

i know this seems like a bad card to chat on, but why isn't there a charles barkley card? I think 2k should make one.

I'm not sure if I'm being dumb but since when was Shaq- Shaq Daddy...
Isn't he the diesel

today i pulled the fatass ;o

Shaquille Rashaun O'Neal (/ʃəˈkiːl/ shə-keel; born March 6, 1972), nicknamed Shaq (/ˈʃæk/ shak), is an American retired professional basketball player who is currently an analyst on the television program Inside the NBA. Listed at 7 ft 1 in (2.16 m) tall[1] and weighing 325 pounds (147 kg), he was one of the heaviest players ever to play in the NBA. O'Neal played for six teams throughout his 19-year NBA career.

Following his career at Louisiana State University, O'Neal was drafted by the Orlando Magic with the first overall pick in the 1992 NBA draft. He quickly became one of the best centers in the league, winning Rookie of the Year in 1992–93 and later leading his team to the 1995 NBA Finals. After four years with the Magic, O'Neal signed as a free agent with the Los Angeles Lakers. They won three consecutive championships in 2000, 2001, and 2002. Amid tension between O'Neal and Kobe Bryant, O'Neal was traded to the Miami Heat in 2004, and his fourth NBA championship followed in 2006. Midway through the 2007–2008 season he was traded to the Phoenix Suns. After a season-and-a-half with the Suns, O'Neal was traded to the Cleveland Cavaliers in the 2009–10 season.[2] O'Neal played for the Boston Celtics in the 2010–11 season before retiring.[3]

O'Neal's individual accolades include the 1999–2000 MVP award, the 1992–93 NBA Rookie of the Year award, 15 All-Star game selections, three All-Star Game MVP awards, three Finals MVP awards, two scoring titles, 14 All-NBA team selections, and three NBA All-Defensive Team selections. He is one of only three players to win NBA MVP, All-Star game MVP and Finals MVP awards in the same year (2000); the other players are Willis Reed in 1970 and Michael Jordan in 1996 and 1998. He ranks 7th all-time in points scored, 5th in field goals, 13th in rebounds, and 7th in blocks. Largely due to his ability to dunk the basketball, O'Neal also ranks 3rd all-time in field goal percentage (58.2%).[4] O'Neal was elected into the Naismith Memorial Basketball Hall of Fame in 2016.[5]

In addition to his basketball career, O'Neal has released four rap albums, with his first, Shaq Diesel, going platinum. He has appeared in numerous films and has starred in his own reality shows, Shaq's Big Challenge and Shaq Vs.. He currently hosts The Big Podcast with Shaq.[6]

Shaq is on my team and can drive and slam it on kids. He is actually pretty good at shooting free throws

these stats are quite accurate, shaq is literally a behemoth and he was obviously the best center of that era.

all i do with shaq is fire 3's hes amazing with it!!!
Only 0-20 shooting from deep better than going 12-12 like stephen curry

Should be a 100 card, should have every signature skill and every attribute should be 100

You don't even have to look at the stats. That face alone says: "Ima f*ck u up fam."

hey but why u tag me

cuz ur coolest guy on site

why does he have a gold flashy passer badge

if only shaq was a good shooter...

@notoriousshaq must have disliked our comments lmao