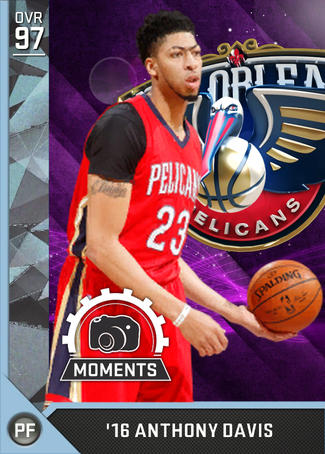 Catches and finished alley-oops at a higher rate than others.

In a League of His Own

ANOTHER CARD I WONT GET GG

What did davis do in this card?

BEst card in the game

chill he's not the best, if he's at PF he'll be under used, thats a fact

How's that a fact? I score 20-30 with my PF all the time, especially in domination and challenges. Everyone has different play styles, just cut u or even the majority of people would under use him at PF doesn't make it a fact at all. That's called speculation. He can just as easily play SF too, he has all the skills and athleticism.

Yeah I like my power Forward. I average about 20 PPG with MVP Bob Pettit

Yeah, I've got him. He can shoot from anywhere, he's nice

He can rebound nicely too

he doesnt have the animations or ball control, every body scores a lot with PF in domination because post moves reward the most mt

I know I wouldn't have beat historic domination as easily without using the post. I was just saying that's technically your opinion that he will be under used at PF, but I do know what u mean. I'd rather have my best players as guards or SF's rather than at PF/C in a RTTP game.

yeah that's true, I mean I wouldn't put him at SF, I'm just saying u could, there r plenty of decent and even some realy good SF's that don't have that great of handles. Paul George only has a 78 in ball control and Kawhi a 61 (although I think they should be higher), which is lower than this card, but they prob have better dibbling animations. AD used to be a guard or SF in HS until he grew a bunch and became a big man.

Why the duck everybody down vote?PG is probably the most complete SF in this game!

Him and amethyst KAT in your team...unbeatable. fortunately I'll never pull a diamond this year.

Yup, might as well just go buy a powerball ticket. You'd have no worse odds and a lot better prize.

Dirk at PF, AD at C... I would quit if I see that starting lineup

Let's talk about something possible...

i have no idea. i guess youtubers wouldn't agree to sponsorships without them being legit. and ive heard them talking about things like 30$ worth of mt. so it might be legit

Beast Team that can shoot threes.

Durant can splash threes, Nigga idk what you trippin' on.

Actually pretty beatable. They are weak in the post.

Why is this downvoted?

we need a moments gauntlet board asap

Truth: Anthony Davis is the best PF in the league right now.

Of course these cards are near impossible to pull, I don't wanna see everyone with a Kyrie and Davis hucking up some shit three's. These cards are amazing so they shouldn't be even close to easy when it comes to pulling them

Even amethysts ain't easy to pull.

It's over ladies and gentleman, it's over!

this ain't vince or aaron

Still, I think the Jet would say that if he saw this card

Are moments packs worth it? Seeing AD und Lillard, i'm thinking about buying a box or a couple of packs.

i feel the same way, moments diamonds are the most common diamonds so AD may drop below a mil at some point. unlike TBT diamonds or mvp/all star diamonds.Cousins dropped below a mil, by april i doubt ad will be over a mill

its a meme going around. Everyone just relates stuff to 'but can they beat the 95-96 bulls'

try it. Make a MyGM and change his stats LOL

Guys are the odds the same for diamonds in moment and all star packs?

whaaaat the allstar packs are amazing. I opened 15 packs and got two amethysts

got diamond westbrook from all star packs. Moment pack sucks tho

Holy Mother of God this is a monster card

OK one of the best shot blockers today has an. 86 shot blocking attribute. Makes sense

You do have a good point there. But still... I kinda think he could've at least get a little bit more respect defensively.

That moment Anthony Davis has better outside scoring than pretty much all the Ray Allen's in the game. :(

Yeah its just to boost his overall.

This player is OVERPOWERED

Welp another card that will be only one thr auction house

@Undeadspace8 good call on the rating fam, I just would've thought that performance deserved a 98

Check out my lineup. Throw me suggestions on improvement please. http://2kmtcentral.com/16/lineups/71107/current

That's the worst lineup I have ever seen... put players in the right positions(In order: PG, SG, SF, PF, C) and put diamond cards instead of the amthecyte cards.

Now this lineup is a legit lineup:

Third highest Total Attributes in the game behind two MJ's...

DIRK OR AD? I GOT AD

Best bigman in the game?

Depending on play style. He won't beat diamond Shaq or Kaeeem in strength and post ups or even Duncan when he comes out. Running him and speed ball if you get him and moments KAT 2 Stretch bigs with 80+ speed and damn who guards that outside Attack.

actually i can lock up shaq with kd ... so strength nd post scoring r both a non factor in this game

age 22 but same level then magic and mj. 2k are u serious.
oh i forgot he got the same skill rating then bill russel. ok so i guess AD is the new messiah .

Dude, it's a moments card so all the stats are based off this one game. The throwback Russel, Magic and Jordan were based on an entire season. Obviously they are better than but this card his based off a 59 Pt 20 reb game. So obviously that single game is gonna have better stats than a player based off of an entire season.

He must have a second brain in his unibrow.

His unibrow is a pelican

So they made a better card but with lesser block than his current one? only 86? pffs.

I believe that is because in his 59 point game he only recorded 1 block in the entire game.

I like how u can get him or Dirk for whichever play style u run.

if u can luck into any of them, cuz they r impossible to get. but yea, either athletic defensive or shooting and post moves

This card is well deserved and his mid range is spot on, he made a lot of mid range shots in that game, and his rebounding is on point, 20 rebounds in one game is amazing, but most of all 59

I mean 59 points, i submitted the comment too early by accident

Tell me what I need to change http://2kmtcentral.com/16/lineups/83109/2k16-current-lineup-comment

Can someone please explain to me why people are paying upwards of 2.5 million MT for this card? Doesn't seem significantly better than the Dynamic version IMO. The rebounding and 3 point shot seem to be the only major differences.
Also, why pay that much MT just for one card? Saw one yesterday on the XB1 auction block going for 850k buy now that didn't sell for about 2 hours.

You forgot about the mid-range. 96 mid-range is a big deal. Add that to a fast PF with speed, defense, rebounding, and 3-point shooting and this card is really good.

There's no denying that this is an amazing card. I just don't see why people think this card is significantly better than the regular Amethyst, considering the large price difference.

Its how the card looks

Please check out my lineup

Saw him around 450k on Xbox, might have go cop this machine.

When you realize the rebounding better than the Historic Kareem

Why does everyone complain about mt.. just keep making crappy my careers and sim games. get all the cards from mt connections and make another crappy mycareer. I get 40k every 2 hours

Packed him on a friends ps4, im shleep cuh

He will get about 3+ MVPS in his career

WHAT IS HIS MOMMENT??? i don't pay attention to any of the highlights on youtube.

I would assume this.

Still, even months after it comes out, probably one of the best cards in the game, attributes and gameplay wise. The base AD was OP, but with boosted stats, it's like a cheat code running around the floor. I've put up MyCareer stats with this card.

LOL I have the new ratings of everybody in 2k17 and somehow I ended up here. LOL!

"Check out the boy head tho"

Dope card...now who's actually gonna get him?

Most fun player to play with in the game for me. The size and athleticism and ability all in one package. Love the brow.

Amethyst has a higher block. Really

He only had 1 block in this Detroit game... so yeah it's gonna be lower.

So? It's suppose to be THE BEST

No, lol... It's a card based specifically off one game. That's the MOMENT. Just like the throwback diamond cards are based off a single career-best game.

I'm guessing you disliked me? That's a nice way to say happy birthday

Thanks for the downvote Damoose. I care less then u do, but im at +550 and you are negative soo

Nobody fucking cares about your birthday. If you say bullshit that is wrong ppl gonna downvote fam.

HE IS THE WOST PLAYER EVER TO LIVE IN THE NBA. WHAT ARE YOU STUPID

I hate Anthony Davis. He is my least favorite player out of any body. And then there's LeBron James. This card is awful.

sorry my brother was on my account. i dont have a problem with either of those players