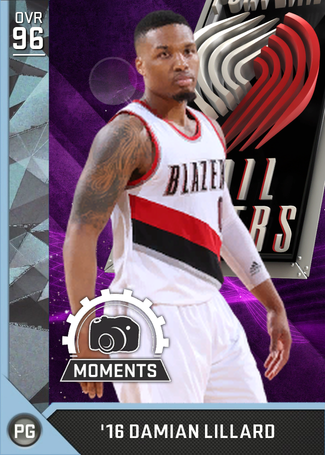 2nd best PG on the game?

Easily One Of The Better Cards

This card is so deserved. He tore Curry, and the Warriors a new asshole, not only that, but he's only the second player to at least 30+ points in four consecutive games, and he became the first player to hit 150+ 3 pointers in his first four seasons in the league.
He might be leading what most people would have thought a bottom team to the playoffs, with the help of McCollum, but it's been a quality effort, and showing everyone why he deserved to be in the All-Star game this year. #It'sDameTime!

Correction *He's the first player to score at least 30 points in four consecutive games, since Clyde the Glide in the Trailblazers history.

Ha. Mate. He's no where near the second player to score 30+ in four straight games. Paul George did that this season alone. Kobe went 9 straight with 40+. I think Wilt did four games straight with 50+

What did I miss?

Yes, I made a mistake, I write without thinking sometimes, and don't check what I write, until usually after I post.
There is no edit option (Maybe something the admins could look at adding in.) and I couldn't be bothered deleting my comment and writing it again, so I put in the correction. Honest mistake.

I agree bro, Damian is probably a future MVP if the Trailblazers GM can figure something out for them.

if they can get better pieces here and there, top 4 west probably or top 5 tied with 4th seed

"Its Lillard...HE GOT THE SHOT OFF"

As a Rockets fan, he broke my heart, but as a basketball fan. It was a fantastic make, and showed how clutch he was when no-one believed in him.

Didn't he hit another buzzer in Houston the following year? IIRC oc

He might have been during the regular season, but we didn't play them in the playoffs in 2015.

IT"S GOOOOD!!! For the first time in 14 years, the blazers win the series!!
Greatest day of my life, well maybe not but it was pretty awesome.

That still gives me chills

What gives you chills

What the commentator said after Dame made the three

I really dont see that given me chills

I watched it live and it was one of the craziest shots i've ever seen live and it was just a really cool moment and whenever I hear what the commentator said, it brings me chills, maybe not to you but to me it does

why don't they boost dames dynamic card instead of giving him a moments every time he plays great????

He should be an amethyst

Y'all think he got snubbed but there are many great Point Guards in the West. If he played in the East he would've been in the ASG but there are too many other experienced PG's in the NBA. He is still an amazing player.. give him some time and he will be in the ASG many times.

completely agree, he was trying to get in with 4+ guard lock-ins with Steph, Westbrook, CP3, and Kobe

probably did it so he could become diamond

HE CAN PLAY DEFENSE, IT'S OVER

eh, not really for a diamond...

Check out my lineup. Throw me suggestions on improvement please. http://2kmtcentral.com/16/lineups/71107/current

2 moments cards in one year awesome!

2K launch Amthyst and then Diamond Lillard but nothing update on Dynamic gold Lillard. Maybe 2K probably regardless on Lillard they have just updated his overall rating +1 and stay 87 for few months. While Lowry, DeRozan Thomas and Rondo overall rating increase at least +4.

2K does roster updates every Friday so they haven't had the opportunity, in their routine schedule at least, to update his dynamic since the game he had against the Warriors came after their roster update on Friday.

This card looks great, and his defense isn't even that bad, that makes it even better.

You know what should happen? If a player gets a Moments card, their Dynamic should go to whatever overall the Moments is for a day. So Dynamic AD would be a 97 for a day, and Lillard would be 96. This would allow people to actually go out and get Dynamic cards

This card is going to be a flat out beast.

ANOTHER CARD I WONT GET GG

Looking at the attributes, he does not seem like a Diamond!

Really? Ridiculous shooter, crazy playmaking, athletic as fuck, great inside scorer, and can play defense. Rebounding ain't too shabby either

i know, but there are amethyst with close stats to these, why not get those? They should have buffed him a bit more

There is already an Amethyst Lillard though, so it really wouldn't make sense to make another one.

truu. what if he dropped 100 points thoo

"YOU KNOW WHAT TIME IT IS, IT'S GAME TIME DAME TIME"

Why did his rebounding go up? He had 0 boards this game lol

Why did Lavine's card get overrated even though he only dunked, which he could already do?!

He got mvp of rising stars game as well

True. Would you say though that that game is not a game that can be taken seriously?

It can be taken as seriously as an all star game card, it's the same exact concept.

I'm not a Curry fan but it wasn't his fault. Lillard made a lot of hard shots and he scored 21 in the 4th, when Curry and the rest of the GSW starters didn't play.

I agree with you, still an outstanding performance by Lillard though

My favorite player who gets 2 moments cards in this game. No one, that I know of, has 2 moments of the same player

Hope 2k give some codes... and normal people can get a chance to get him

Nah... no more fast fingers. 2k would give out codes for diamonds, but realized that the people who get them would immediately sell them. Turn it into a free 1 mil MT.

I understand you but i mean codes for players that you cant sell them. It isn't fair than some people play to get a good team and other people pay money to have a good team, You are paying 60$ for the game and 50$ for the ps plus and you will never pull this player if you dont buy mts. I wont have to buy him but i wan to have him into my lineup

Smart? It bit possible to make 1m mt unless u get lucky snipes

i want this card so badly

he has 2 moments card already...

most underrated player of 2016

Dang You Found Waldo 7! Can you find my other clones?

better than diamond curry. Can drive and finish also has a more consistent 3 and amazing speed. Best PG in the game IMO

This card is fuckin lit

@Zane1914 ur boy has been playing ass

okc plays you guys in the playoffs, prepare for a 4-0 rout haha

a damian lillard with good defense??? is this a fake card

When you get this card instead of his playoffs.

Did his price drop a lot because of the new card being released?