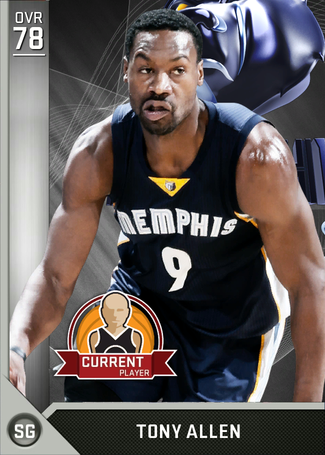 Comes off the bench or out of timeouts making big plays that can energise his team.

"He's fundamentally sound defensively and he plays harder than everybody else defensively," Bryant said. "He has a competitive desire to compete individually. That's very uncommon. Most defensive players I face want help all the time. I've never heard him ask for help. He likes taking the challenge."

"Tony Allen he played one on one defense. He never funneled me anywhere. His job was just to stay in front of me and just hound me the entire game, and he did." -Kobe Bryant

best defender in myteam for the moment, give him a try.

Kawhi, Butler and Green should be closer to him though...

would he be good in 1 silver seed

No. You're gonna want to have that 1 silver seed be a scorer. Tony Allen wouldn't be bad but I would recommend either Avery Bradley or running Alec Burks at the 1

I thought I was the only one who noticed. For some reason, he is the most insane dunker I've used... The first time I noticed was after I had used him for a while, and it was on a random fast break. He did some one handed dunk contest-ish dunk, and since then I've been utilizing his dunk and dunking over centers, in heavy traffic, etc. Great defender and amazing dunker.

His emerald in 15 was amaziñg.

This dude has taken me to the first seed my guy. # no amethyst jus IQ

Useless in nba 2k15 (because of that shit gameplay), so glad that now he is again a great pick if you want to play nice defense.

who remembers when he said he was going to shut down KD !???

He did shut down KD

He didn't shit him down, but he played him extremely well.

He locked him down