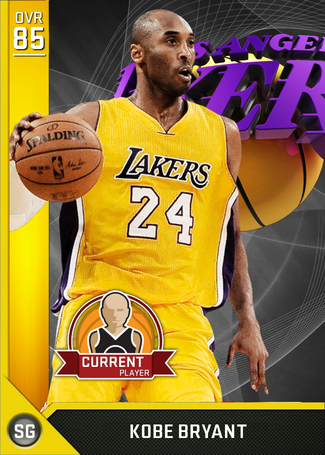 Can get into opponents head while guarding him.

I guess I'll be the first to comment how the card plays.

If you play this like vintage Kobe should be played, you will get things done. His ability to hit the post fade and his decent post control rating creates problems for most guards he backs down. He has a decent driving layup rating and a pretty high draw foul rating meaning when you attack the rack you're probably going to make points either by finishing the layup, getting to the stripe or both. Also a very solid defensive card. If you have a decent understanding of how Kobe plays in real life I'd recommend this card. The ratings aren't that great but if used properly he's a real scoring threat.

I completely agree with you. However, due to his low shooting stats, he is not able to knock down open jumpers often that should be fairly easy to make. It feels as if only sometimes does his shot actually go in. He is a fairly nice passer and rebounder for his card as I often see him with around 4 assists and 5 rebounds a game. Very nice card to use as I often feel the remnants of vintage Kobe while using this card.

Idk maybe it's because I'm so used to his form from all the other games, but he's cash money for me, even from three which surprised me.

Can't wait for MVP season Kobe!! He is my favorite player of all time! He may not be the greatest, but he is top 3 SG all time in my mind.

the man's old.... he should have retired sooner, on a better note. He's almost on a Bret Farve level. I may not like his team, but he was an amazing player, and the longer he keep playing the more diminished his reputation will become.

I realise you hadn't seen it at the time but Kobe just ended his career on 35 and 60 point games, which to me justify this year alone. To go out on a performance like that is amazing.

this is a joke if it was michael jordans last year they would ride his cock to a 90+. Kobe is a top 5/top 3 all time and should never be an 85

Nah. Jordan's last year coincided with NBA 2k3 in which he was only rated an 88.

Ik it's late but that's a little high regardless

I would also agree with that. However, I wonder if it was high since they didn't standardize all the ratings back then like they did this year. If it wasn't for the legends scale (or whatever they called it) I'm sure Kobe starting out would have been around an 88 also.

Kobe misses a ton of wide open shots even the fadeaway. He is a great finisher but thats about it. I honestly recommend you get a guy like Jimmy Butler over this version of Kobe unless you are a diehard Kobe fan.

i dont miss often with him

When you one of the biggest ball hogs but your highest stat is playmaking...

I'll give you the dub

Card is not kobe, love has a better speed...

That card picture just takes me back man

so sorry anybody has to see this, and tht dynamic ratings, makes me so sad

Hats off to The BLACK MAMBA!

Don't expect a moments right after the game...

It'll be smart to get the dynamic ratings card, he will improve his shooting ability. And speed.,.,.

Yeah, you're right I picked him up before the season started, and now after a couple weeks I'm not regretting it because he fits in with the rest of my lineup...

you must be feeling preeeety stupid right about now

Those stats look godly compared to what he is now lmao

I like that 2k had the balls to downgrade him. Not hatin on Kobe but he just isnt what he was.

hes so cheap on the market

What happened to the amethyst version they had of him? He was rated a 91. It was about 4:30PM pacific time that I came across it. 10 minutes later, the card was gone. Weird lol

Dunk, Ball Control, Post Fade, and speed should be higher.

He isn't as athletic as he used to be. Kobe is nearly 40 and he's going to retire soon. Once 2k releases the afro version and the old bald version, they're gonna give him some OP ass stats.

how do u see comments by date

i went to comments on you, and just gussed till i got to were there were no more pages

But still he has handles plus shoots well for his age. Dunking I can see at 40.

This is legit exactly what I thought. He did absolutely nothing this season

Actually he was one of the top scorers in the league before he was injured. He shot a very poor percentage to be honest, however, his team wasn't exactly stacked and the offense they ran relied far too much on Kobe. A younger Kobe might have been able to carry the team with his scoring, but an aging Kobe coming off an injury... no chance and that's why he got injured again, too much for his body to handle at his age and with his injury history.

But he's never healthy anymore... He was healthy for 20-25 games last season and basically tried to do everything, and failed. Not only was he hurting the Lakers ATM but he was hurting the young players development.

He wasn't healthy last season... His right shoulder was hurt all of last season. And who could grow on that roster? Clarkson wasn't getting PT, Randle was injured. He had to do that, nobody knew what they were doing on that team.

Ok then he's never healthy, and he's hurting his team even more by playing like that on a bad shoulder.

What? The coaching staff wanted him to.