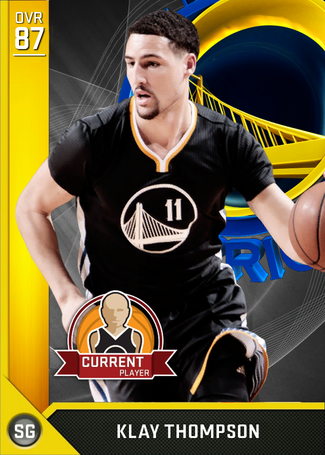 Steps his game up when an Alpha Dog teammate is out or is playing poorly.

Not great but not bad

As good defense as Jimmy Butler and CP3...

Yeah that's crazy haha, he's not as good as either of them at defense.

Dude he isn't the 2nd best perimeter defender in the league

Damn you make one bad mistake and get a -10, I feel for you man

I think that happens to everyone evry once in a while...my Larry Bird comment got downvoted into hell

As a defender at least. He's still an excellent shooter.

How the fuck is this downvoted? He's arguably the 2nd best shooter in the league.

No problem I'm sure nothing will happen

It's not downvoted, even I upvoted it

It was when I said that, otherwise I wouldn't have said it.

When I first said he's still an excellent shooter at least

Thats bull. Did you see the work that he did in the playoffs? He guarded Harden and forced 10 turnovers in a game... Much like Bogut and Ezili, Klay is actually underrated.

To be fair, Harden turns the ball over more than any other player in the NBA. And Klay didn't force all 10 on his own

I'm Warriors fan and have been for a pretty long time now, but even though Klay is a good defender, 94 on ball defense IQ is way too high. He also doesn't deserve that offensive consistency at ALL, he really isn't a consistent shooter. Klay is a top 5 shooting guard in the league, but he doesn't deserve some of these ratings.

Soft as a pillow. Love klay in real life but if you get near him you'll disrupt his shot and he'll miss.

So it's not just me

Really dissapointed with him.

I have him in my 3 golds lineup

Klay can lock on defense, but on offense he just does nothing.

He can score only when REALLY wide open.
He can't play P'n'R or slash as he is really really slow

This is EXACTLY how he is for me!

Agreed, he only really serves one purpose on offense (shooting) and there are much better options for the same price.

Same! I shoot, and even gave him 3 point shoes, and he goes like 1 of 6 every single game.

In my opinion he is a little bit irregular, sometimes he misses 3's alones, but makes 3's against a very good defenders... Anyway he is one of the best second guards of the game.

I have had the same experience. Not as consitent as I expected. I get better consistency from Korver on the wing, but he's still a lockdown defender.

He has the "Wildcard" mental badge which makes him inconsistent

I didn't even see that lol

I grinded in mycareer to get this guy and hes been disapointing. Some games hes on and hits good shots and others he just bricks wide open shots. His shot looks good but its kinda wishy-washy. It goes him sometimes(should go in more w/ his shooting attributes and badges) yet sometimes he misses for no reason.

Decent Shooter. Never Hits 3 Shots In A Row For Me. Does "Microwave" Exist On MyTeam Domination.

i think its called volume shooter

lmao his 3s suck in the game. Wide open, near perfect release and he still misses. Dont get why he can only shoot 3s in the corner.

Bruh Klay Thompson ain't that good at defense 2k. He can lock people up, no way he as good as LeBron(not a FAN) at defense.

Disclaimer: I don't like LeBron, I am a Celtics fan.

I have no idea what it is but he will constantly miss wide open midrange shots and three pointers. There will be games when Blake Griffin will make more 3's than Klay. I just can't rely on him to do more than fastbreak layups (which he sometimes misses)

Last year, I found Klay's release really tough to shoot with reliably. Not this year. By and large, I'm shooting well with him (40-50%) on high volume. Especially if I'm mindful about shooting at his outside hot spots at the wings. Ended up shooting well enough with him that I invested in badging him up entirely.

If he's wide open, I probably hit 70% plus with him. Badged up with Deadeye, he's a killer. And with Limitless Range badged up, you can pull up from 25 feet and feel good about your chances of hitting.

Easy to get hot, and even more so with Gold Microwave. With Gold Unfazed, he can be your go-to all game long. When he's hot, he's absurd. Last night, played the last of the RttF Pistons Challenge with him vs. the Lakers and he was quiet until middle of 2nd quarter. Then got a dunk at 2:48 left, and then dropped four 3-pointers in the last 1:45. He came out of halftime still hot and laid down a mid-range, two 3-pointers, got a 3-point foul, then a layup with an and-1. Hit 3 more 3-pointers in the 4th. Ended up with 37 points...in 16 minutes. 9-15 from outside, with at least 3 really idiotic shot choices on my part, so easily could have been 9-12, 0.750 from outside.

I wasn't looking to feed him, necessarily, but on the break, he has a knack for running straight for a corner to get a pass for an open look. And if he's standing deep midrange and you lead him with icon passing, he is good about getting all the way out to the 3-point line. It's just so easy and effortless to bomb with Klay.

Of course, is also an elite defender and can finish strong at the hoop. If you can shoot really well with Kawhi or Butler, they're more athletic and can be better defenders. But in pure outside shooting, Klay is king for me. Badge him up and he's on an unearthly level.

why dont they have moments klay when he scored 37 against the kings?

Um I am the only one who sees him a 90 overall gold?

yeah all currents are dynamic

You can get him easily in myCareer, so his price shouldn't bee too expensive for his skill. I just hope he isn't as streaky as he is in real life. He's gone from making every single shot in a half to missing every single one in the blink of an eye.

Why is he one of the connections unlockables?

Yep. He's one right from the start I do believe, no fan requirement.

Oh ye I see it now. 2k have a lot of top players in MyCareer connections.

lol he is worse than real life

beast love him. can be inconsistent tho

My god what a card

Best shooter in the game for me

My least favorite player in the NBA.

my least favorite person EVER

Ye I got this today. He makes everything that isn't a stulid shot. You'll come away with 5/5 from 3 games often if used correctly.

I hate this card with a passion
I have never once seen this card miss an open jumper, you have to play perfect defense on him at all times or else he is going to hit, and even then, it still doesn't work. I had a hand in his face with Jimmy Butler and he drained it.
I literally want to strangle someone whenever I play against him

Thats That CPU Sh*t. They Wont Perform Like That Once You Get Them.

You might've played me.

My Klay is clutch af. Got me my first online buzzer beater win of this 2k. And it wasn't even a 3.

I miss wide open shots all the time with him.

Can I only play you then?

the sane thing has happened to me. I feel like even when i have a good open shot, he misses a lot. I've only have one really good game with him. Could I just be crazy? Maybe.

he's a beast in 2k usually

Bitch dont give no doubt to me nigga