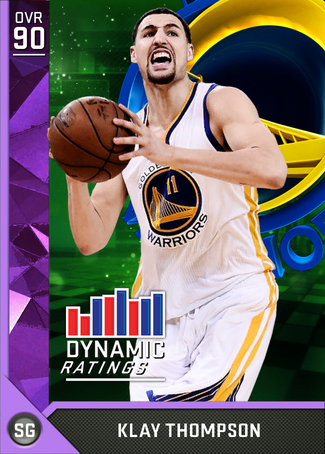 Steps his game up when an Alpha Dog teammate is out or is playing poorly.

Lol hes one of the streakiest players in the league

He even has a badge that makes him streaky

yea but he also had games where he didnt hit anything

True, but not alot

How is he not an amethyst when he led Golden State with a W while Steph being injured and out?

No 2 diamonds and 3 amethysts

moments do not count

almost amethyst. three amethysts+ on team? could it happen? find out on the next episode of Dragon Ball Z

He deserves it. Playing crazy well recently, totally stepped up

Two amethyst and a diamond

this klay deserves so much better :(

Klay deserves amythest but I'd personally prefer him staying a gold as I like this card in RTTP 3 gold seeds.

they better update this to atleast 91. he doesnt miss from 3 or midrange and he can drive smh

they updated it finally, almost as dumb as the 95 diamond lebron

Hey guys could you take a look at my lineup?
http://2kmtcentral.com/16/lineups/290873/current-lineup

Give him a diamond card now, saved warriors ass

He'll get an update and a diamond I think...

i thought you ment dynamic rating

We need a diamond moments card

Bought this card for 20k =D

still one of the best SG in the NBA right now

Good thing too, 93 3pt was probably a bit too much for Klay, but 85 was certainly too low. I think it's good where it is now.

Why did he go down so much right after a pretty big game...?

Klay has been ass for most of this season

He should get a moments card for you know what from last year.

People are so gullible

I've been using this card lately and honestly his base card is so much more reliable.

i wanna get this card so badly... but he has wildcard

SHOULD BE AN AMETHYST

still not an amethyst palyer after update. what a joke

He doesn't deserve an amethyst at all

Why does he have a higher defensive rating than Kawhi?

Am I the only one that thinks that Klay should have a better acceleration as shown in his cutting to the baskets and driving layups in real life?

I pulled this card back in like november when he was an 87, and I sold cuz he was playing bad. The market is shit anyway so it's not like i regret selling or anything, but I thought that's kinda cool since good DRs don't drop much

If Klay is an Amethyst, Then lillard should be an Amethyst FOR SURE!!

they upgrade this Klay after a few playoff games but don't update Lebron in months. 2k are some idiots.

The only thing worthy on an update is lebrons shooting which he sucks at...

yeah, you don't watch basketball. yeah Lebron's jumper has been super shaky but his overall game has been crazy the second half of the season. he was playing out of his mind. no way he didn't deserve an upgrade or two.

Its about his overall performance...they dont update it just becuz he played better the second half of the season...and his lateral quickness is overrated...

what the hell??? "they don't update it just becuz he played better the second half of the season"??? why? they're supposed to update the cards(if they deserve it) every day. second half of an nba season is 40+ games is a lot of friggin games, and LeBron was playing fantastic in them. the fact that they never updated his card not once during that stretch is mind bogglingly perplexing. It's crazy that in a whole 82 game season they only updated him once in general, and you don't watch LeBron play, his lateral quickness is far from overatted.

Check the percentages, lebron did shoot well from three in a couple of games but his percentge isnt popping like lebron of old

three point shooting does not make a whole player, all other facets of his game were popping.

And its displayed in the card...

This card blows...or maybe it's just the game this year but I swear if I take a wide-open shot with this guy it's almost always a brick

true feel like it's better to leave my opponent wide open this year. less of a chance they make the shot

If you want Klay, just get the "current player" version

Yeah, but IRL he started off bad this season, but has scored over 30 points in the last 4 or 5 games or something

Needs a boost after that Clippers game

Should I invest in him? Will he become an amethyst soon?

yeah im wondering too, theres a good chance he will, if he performs in the playoffs

the dude is so streaky but yet gets constant updates. wow

This boy getting an upgrade to amethyst, FAX

can they please update this card already

why is he an amethyst???

because he's an absolute beast

For all the naysayers, What stat is icorrect oin this card?

yes it is, and its bigger

Oh god, the Warriors' "Big 3" are all amethysts

And Steph is a diamond

klay is such a beast, so happy he's an amethyst, what a beast, well deserved

and I thought the current Klay Thompson was a beast

2k should make a TBT Klay card for the 37 point quarter.

according to Troydan he is on the Lakers

how is Thompson an amethyst but lillard, wall, butler, Drummond, and many more are playing better than him but there not an amethyst?

In the playoffs he was sometimes better than curry.

What I want to know is, why does he have Posterizer, when his Driving Dunk is a 65, his Standing Dunk is a 35, and his Contact Dunk is a 40?

Bronze limitless range and can hit shots from the logo

Wildcard Badge
"A player who can be wildly inconsistent."
98 offensive consistency
????????

In the picture he looks like he's about to E'Twaun Moore

2k has been slipping with the dynamic updates. this man should without question be a 90+ on next update. back to back 40 pt games

No, he's better this year, Blake got injured for punching his friend!

I had heard that it was GM. But thanks for the correct info:)

He punched Doc Rivers? That would be false little kid

Why he doesnt have a better three than Curry, the world may never know

I don't have a problem with Klay being a 90, he's been playing great. BUT GET DRAYMOND'S DONKEY-LOOKIN ASS KICK YOU IN THE NUTS ASS BACK DOWN TO A GOLD

Why the dislikes? I thought AROD disappeared?