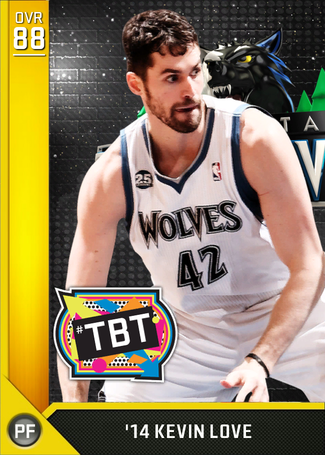 Generally pretty chill at all times.

Anybody know when this card's coming out?

You obviously didn't read when he made the comment. No need to call him an idiot bro

I remember his card from 2k14. Absolute ANIMAL

This guy was ranked 7th best player this year and an 88?

cavs in 4 no matter what

Not with the way OKC has been rolling lately. Cavs have been playing easier teams so far. OKC beat San Antonio in 6 and are up 2-1 against the defending champs. So if the Thunder make it to the Finals I think they'll win. #It'sNotBecauseI'mAThunderFan

Well we know what really happened.

@zemGOAT You the Real MVP!!!

83 LPD for a guy known to be a horrible defender?

I'd like to point out that it's called Low Post Defense IQ. Irl, Kevin Love knows how to defend the post 1 on 1 pretty well. His lateral quickness, blocking, pick & roll defending, and help defense are his defensive weak spots irl, and those stats are butchered on this card which is absolutely fair. It could be argued that 76 shot contest is too high, but I think his LPD is right where it should be

He may know how to defend the low post, but he still can't stop guys from scoring while posting him up. His biggest criticism is his lackluster post defense, which are shown on his current and dynamic ratings cards. Therefore, his LPD IQ should be lower because that is the attribute that says how well a player can stop a post player.

It is shown with his Defensive Consistency. He'll be good at times and bad at most.

This card should be an amethyst. His defense should have a higher rating and was the best PF and was top 3 PF in 2014. I think maybe a 90 to 92 overall.

I would have assumed that this card and the TBT bosh would have been similarly rated. Love was the reason the Timbs were playoff contenders, that team had nobody

he should go back to minnesota

Lol now no one even wants this card anymore...

FINALLY HE'S IN THE GAME

Haha you must really "Love" him.

Haha Well @Ran_Yo You Must buy a dog named "Kevin" and you should "Love" Him.

1. Not even top 10 power forward this season
2. If they beat the raptors, still spurs/gsw will sweep
3. I'll let you figure out why they won't
4. True, but doesnt mean shit, got outplayed by kobe
5. The only thing he can do and hes still inconsistent
6. Lebron regrets trading away wiggins everyday of his life
7. Tim Duncan is 39 and arguably still better than him
8. He will have to pay teams like GSW and spurs to join them and sit on the bench
9. Kyrie great handles doesnt finish it
10. Haters can be correct, like this time.

Hey buddy, just wanted to check in and see how you're coping with the CAVS IN SEVEN FINALS VICTORY

Not saying I agree with JJ, but I'd like to argue.
1. I'd say he's a top 10 PF this year. Not top 5, but top 10.
2. They will beat the Heat or the Raptors. Nobody sweeps the Cavs. Not even Golden State. They fucking slaughtered the Hawks last night and they're gonna win this series easily.
3. Not saying they'll win the title, but they are definitely not ruled out. The Cavs are more of a lock for the finals than any other team, including Golden State. And if you're in the finals, you have a chance.
4. Lol Kobe didn't outplay LeBron. Don't even try to say that. LeBron creates points out of nothing, whether it's for himself or for teammates. Playing next to LeBron gets Love far more opportunities at the perimeter, though it takes away from his chances in the post.
5. He's still a good rebounder, and a solid post offensive option.
6. LeBron is probably glad they traded Wiggins. Wiggins would've eventually upstaged him at his own position on his own team, and it would hurt both of their careers.
7. Tim Duncan is not a better player than Love anymore.
8. JJ is right, Love was possibly the top target for several teams last year in the offseason. Mid-level teams wanted him, and they'd all take him. Golden State considered trading for him as well.
9. Kyrie most definitely finishes after his handles, that's ridiculous. The guy scores 20 a game, how do you think he gets his points?
10. Maybe the haters are correct but you're definitely wrong

kobe never outplayed lebron, he scored 2 more points than him with less rebounds and less assists, and lost the game.