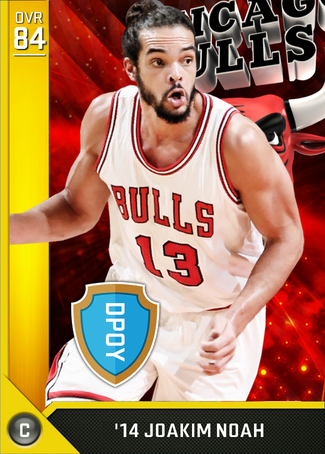 Defensive Player of the Year

Can get into opponents head while guarding him.

Can wreak havoc on the floor with physical and tough play.

only 59 passing accuracy?
I really don't like him but he's one of the best passing big men in the NBA

64 passing accuracy?
I really don't like him but he's one of the best passing big men in the NBA

Legitimately a joke. As has been said this guy was NBA First Team this year, 4th in MVP voting, averaged 5 assists (AS A CENTER), recorded multiple triple doubles and basically propelled the injured Bulls squad to the playoffs.

By 2K logic current KAT and DeMarcus are significantly better than this guy, which just isn't fair.

For a guy named KlayyyyyIsGayyy you are pretty darn smart.

I didnt know u were still active...

This card is extremely underwhelming for a DPOY who also finished 4th in MVP voting...

Its a joke really, deserved so much more

He'd still be in the DPOY conversation is it weren't for his injuries,which seem to plague the Bulls in recent years.

first recorded mention of the greatest franchise in nba history, thank you ian

got no fuckin idea lmao, i think this might be the first ever comment to mention the bulls? not sure

so basically he lost 8 overall in two years

DPOY and in the line up for mvp and only gets a 79, this card needs changing before it drops...

Everyone talking about the 76 block on this year's amethyst... at least 2K is being consistent ig

I love his jump shot...like that hen I was 6

Speed, Acceleration, and Lateral should be higher. He guards perimeter players very well and would sometimes even bring the ball up the court, or even run the fast break himself.

There going to update his stats

Ok guys he is actually one of the nicest people ever. I already met him twice. He will walk in the streets of Chicago to speak to you. So thank you Joakim.