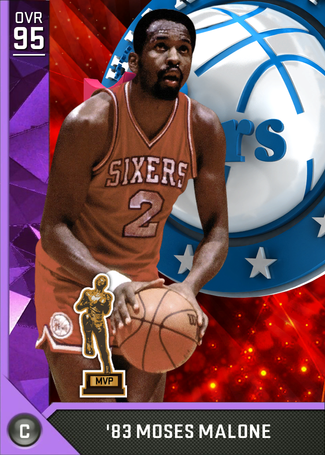 Only 70 block! Wow should also have a 99 offensive rebound

Just an absolute beast on the low block. I was skeptical when I pulled this card and saw he was only a 6'10" C with a 65 vertical but he more than makes up for it with his positioning. I've grabbed offensive boards off my own missed free throws regularly. His post moves are almost impossible to stop and that 99 draw foul is insane. It basically guarantees if he misses a layup, he draws a foul and his free throw animation is easy to get the hang of. I routinely shoot 10+ FT with him and hit 100%. He has a pretty easy time forcing whoever is guarding him to foul out or at least be forced to the bench for a large chunk of game time, meaning he gets a lot of opportunity to wreck backup C's. It's almost unfair how good he is at breaking down defence. He either scores at will on weaker defenders or racks up fouls against stronger ones. Only weak element to his game is transition. Doesn't run too well and his driving layup + dunk aren't the best. Coming off the P&R with him is fine so long as you don't expect to drive through guys. Just post up and enjoy the dominance.

With that standing dunk too

Drop it in the post when the defense is out of position (eg start of a halfcourt set, which is really weird) and hold square and right trigger. Straight cashflow profit

offensive rebounding should be 200 wtf

Don't be fooled by his low price on the market, Moses gets it in! He is a goon. I got him coming off the bench with Rewards Patrick Ewing. That 99 draw foul on him is niceeeeee.
Check out my beastly lineup:
http://2kmtcentral.com/16/lineups/44641/1st-48-current-lineup

Looks good attribute wise but he sucked last year. Don't know how much his rebounding will come into play at 6'10 with a 65 vert, but Pettit is pretty good so we'll see.

To get this card on C is the best decision.For a price between 12k-18k he is near a diamond player.He is an absolutely beast on boards especially on the offensive end. He is a special post player.I sold hakeem historic for 77k and bought so i vahe 60k where i get AI for 31k .
Rate my lineup? http://2kmtcentral.com/16/lineups/178423/ogloc50

Am I the only one WHO feels this Card like a Diamond ?
This guy is a beast! Def & off

He better be back this year, make me proud 2k ;)

He was a great player. This "Diamond" goes for about 13k and I'm thinking about switching Walton for him. R.I.P. Philadelphia NBA players.

I'm in love with this card right now. Working on maxing out all of his badges.

I have him, what a legend

Pulled him in an MVP box

Gets into so much foul trouble but worth the price, has a few flagrant every couple games but is still a beast

Should I buy him or Petit?

Ya I picked him up and I'm so happy I did.

Absolute monster on the boards, great post player and very good defender . He replaced amethyst Marc Gasol in the starting lineup for me.

him or Willis Reed?

Thanks lol. Nobody has written a review on Moses so I don't know which is better

Anybody have any input or suggestions between MVPs Gilmore, Malone, Reed or Walton? Thanks!

i used him as PF sometime