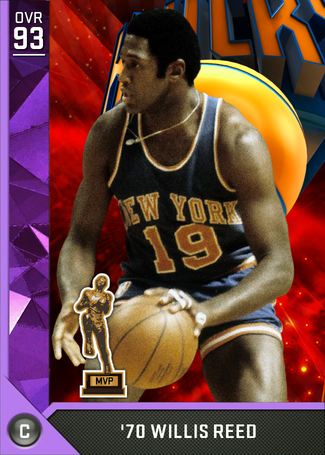 A rebounding inside scorer

This and Bill Walton will be great hidden gems when released. In Willis's case, he has the great mid range, defense, and rebounding at 6'9", which will make him undersized, and more at home with playing power forward.

They will update his stats once he is released, it's the same for all of the MVP collection

Did he really play with a necklace?

You could dot that back then.

I know, but that's just odd, I feel like it would just be an annoyance

Who knows he probably was comfortable with it if he wore it sometimes. Whatever

i was talking about the non updated one

they say that the mvp award is given to the best player on the best team, yet they give it to willis reed instead of walt frazier. Willis even said "it's clyde's (walt for all you non-nerds) ball, he just lets us play with it once in a while," which is basically willis saying that walt is better then himself, and willis still won it even though the lakers where just about as good as them and they had multiple players better then willis imo

Just as nasty as this onyx was last year. His defense is crazy, he has a midrange shot. And he has crossover 16

He'll be a hidden gem soon, but for now, he's the amethyst troll...

This card can make open threes for me

AWESOME! In every game I played with him the CPU ended doing a "2 on 1 defense" to him because he is a beast, unstoppable. Very recomended, Reed and Walton

I didn't play with Gilmore already, but he seems a beast also, what can you tell me about him?

Well I didn't play with him either , but he is tall lol and gets alot of rebounds I heard

This card was a savage last year. I might just have to pick him up

Anybody have any input or suggestions between MVPs Gilmore, Malone, Reed or Walton? Thanks!

except he doesn't have a higher free throw than block

This rating is unrealistic ASF, he wasn't that good

Here we go with your stupid stats. He was the captain on arguably one of the greatest TEAMs in NBA history. He's a HOFer, top 50 all time. He didn't average a lot because he didnt have to. 6 players on the 69-70 Knicks averaged double digits in scoring. They epitomized TEAM ball. Every starter averaged more than 2 assist. They were ranked 1st in defense and 3rd to last in pace. EVERYOne on the team could shoot. They played total basketball anchored by the thickest neck in NBA history. Mr Willis Reed

Yeah he does, he was he was a beast

True but you aren't going to give an mvp a gold card are you?