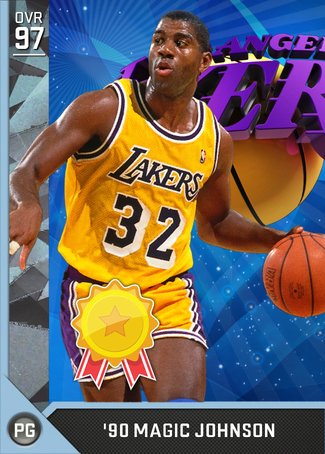 Can cause his defender to get shock with his spin moves.

Behind The Back Pro

Can catch his defender off guard with behind the back moves

Master of In and Out

A ball-handler known for breaking his defender down with in and out moves.

A ball-handler who uses elite size-up moves to break his defender down.

How does he not have max passing stats... almost as ridiculous as his 3pt rating lol

and 2K ain't giving out 99's so easy anymore. I don't think anyone has 99 rebound or speed that I've seen, not even Bill Russell and Iverson do. Prior years they were more generous in their ratings. 98 passing accuracy is pretty good, maybe his vision could be higher.

3 pt line was closer too, but they r reward cards and 2k boosts att's on reward and all diamond cards really. You know this. After the last update the reward MJ has a 94 or 93 3 pt rating.

Yeah. Just gonna point out I don't see anyone complaining about the 3 point rating of other cards when the line was shortened being unfair... MJ should have like an 87 three for that year, but for collecting 2700 cards you deserve better. It's a damn video game.

Oh I don't care, I'm glad he has the higher rating. I ain't the complainer type. I might make a quick comment about something or not like something but I've got better things to do than complain on a site all day. Most people play my team to build an unrealistic team anyway or they could just play the regular teams. I mean 2700 takes so long, plus he's most people's pick for the greatest NBA player ever. If they can give some good but not great guy a diamond card with a 95+ 3 pt rating based on only one game, then it's definitely justified on the best card in the game who is hella hard to get, plus a legend and arguably the best player ever who had the best career ever.

Plus on the real 95-96 MJ in the roster he has an 89, so it's kinda close to your 87 u suggested. Prob the reason nobody complains about shooting better with the line being shorter was there wasn't really many people or at least any important enough to who shot so many more shots and shot a lot better when the line became closer. Most good shooters could shoot from the longer line with not much of a drop off. MJ couldn't do that as easily at least not consistently, but when it was clutch time, he always stepped it up and made whatever. and because he was so good everyone tries to knit pick his game for any weaknesses. Even if he couldn't shoot as well from the longer line, he didn't need too, the Bulls still won every year from the 90's when MJ played, except his half year coming back from baseball.

Exactly... Hes one of the greatest passers of all time...

Anyone know how to get this yet???

It's going to come out on the black market for 750,000 (or possibly more, but Nash and Bird have both been that amount)

This is definitely the best card out of the lot then! Might pick him up

its a locker code

Not that it's realistic but, still more realistic than a 99 Jordan...

Let's be real though, the entire ratings system was based off of having one player, the best in that category, compared to everyone else and that would determine their ratings system.

When the measurement made for the ratings is BASED off of MJ being a 99 from the start, it's useless to try and change his ratings.

The truth hurts, at least according to 68 people

Except it isn`t overrated, Wilts stats were still GOAT worthy when adjusted

Lol 37 dislikes? I thought people agreed with me...

i upvoted for u

lol they should... I DO lol

man klay has 36 dislikes on his comment...people get so butthurt if you say anything bad about MJ. MJ is overrated, get over it

Idk if you are new to here but many people on here do believe Wilt is GOAT, more then you would think

not talking about this website. i'm talking about the whole basketball world, like the players, actual nba, etc. but i know what you mean though. first thing i see when i came on this site is klayyyyy talking about a million different ways wilt's the GOAT. after a week, everyone else is saying the same thing. props to klayyyyy though. his comments were actually very informative.

Most op player you will ever see.
6'9 point guard with an 84 standing 3, 99 driving layup and post moves what more do you want?

Finnaly 2k made a magic johnson that was actaully better than bird. Not shooting wise but overall better

How do I get him?

So here he is, a truly good Magic.. Better than Bird even, nice. I assume we will get him by completing some historic collections, maybe a "Best Passers" or "Dimmers" or something like that, with amethysts like Stockton, Nash, Kidd or Cousy, willing to try him!!

Same with all the ?? rewards I think.

OK, so you're telling me that Magic Johnson has a higher 3-point rating than fucking James Harden?!?!? FUCKING WHAT 2K!?!?!?!?

They obviously boosted his stats, 2K has strange reasoning

Remember in the past 2K games when Magic was slow AF for a PG?

should low his 3 alittle and 99 for all passing stats

Use Thunders playbook because they post up their PG's because of Russ and let a 6"9 Magic with 98 post hook post up a smaller PG and he will never miss.

Can't wait to use this card, his 98 ovr gold was my favorite pg in 2k15 above even pd steph and zeke

he aint going to be nicer than onyx goatmeer though.

How do you get these "??" collector level players?? Not out yet? Any idea if you'll get them for collections, RTTP, domination or gauntlet???

His standing mid-range might be a lil too high. Should be in the mid 70's. His steal and rebounding ratings should also be higher.

I need this guy, he can do basically everything and hes 6'9

I wonder who will be better between Magic and the Kings version of Oscar.

Haha 32 badges and thats his number.

HOW DOES HE NOT HAVE 99 VISION?

Anybody has an idea what he could be an award for? What to do to get him?!

He isn't, you need to buy him in the black market

Is he in the black market now?!

You hace to be lucky K think and need to pay 750k mt to get him.

Is this a guess, or do you know it? Any proof, source?!

Yes, search on youtube Rewards Magic it should show how he's only obtainable from the BM

Nope! It won't show something on YT. It's only a guess that he might be obtainable on the BM. Maybe he's the reward for the 30 runes. Nobody knows right know. You neither.

Cool down lil'boy. That's the difference between guessing and knowing. You answered several time with sciolism. Don't spam if you don't know. And don't call me dumbass, mf etc. if you don't have the guts do to it irl. BTW I don't think I was rude the first 3times - but fooling me and wasting my time; c'mon.

I wasn't fooling you, just trying to help but some people dont appreciate that. Haha

Does anyone know when they are actually going to release this card on the black market?

i think its canceled

I really hope not :(

He's out now I believe

Does anyone know how to https://pbs.twimg.com/media/CP22kYoWIAI2wyD.png use your MyCareer player in MyTeam?

supposedly through the black market

Should be like the Diamond Durant last year. That was great

i dont think so

Go to the link

Its probably one of the connections in mycareer... That's my best guess...

You can use your my career player in myteam

I meant to put a question mark at the end of the sentence. but if you click on that guys link it says you can but idk how.

LosPollos got This card by buying every ball, including diamond black market balls. go crazy.

it is now confirmed fake.

To get this diamond Magic, you have to collect ALL balls in the game, even the black market ones. LosPollosTV did it on twitch!!!

Is there any way to check this, I mean I want to believe you but I gotta be sure man!

Not true the guy who originally did this was tricking people so he could sell his diamond balls. He made a lot of profit, but this is FALSE!

Yea my bad. Lospollostv apologized for it.

HIV* if he had aids he would be dead