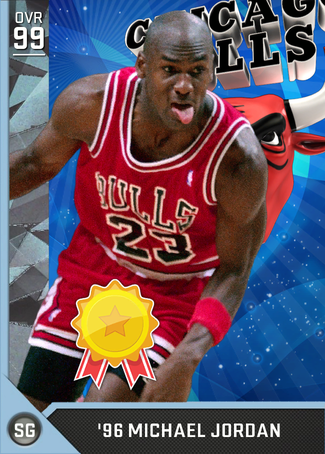 After spending nearly 9 months playing this game, Reward Michael Jordan is one of, if not the best, shooting guards you can acquire in NBA 2K16. His ability to not only drive to the basket for emphatic dunks and acrobatic layups, but to shoot the mid-range and three-point shot, its unprecedented in 2K16. Now, i'm not saying he's Playoff Stephen Curry from deep, but to have a Michael Jordan with a 93 Standing Three-Pointer, it's absolutely insane. His defensive prowess is second-to-none, as he is the only card to date with a 99 Defensive Overall, according to 2KMTCentral, and it shows during game play. But the real question about him is, "Is He Really Worth 2700 Cards?" And I would answer with a resounding YES, he is worth it. To me, it's a trophy only obtained by hard work, dedication, time, and drive. But let's not make this review sound like a High School Basketball tryout, it's just a video game. Is it a cool card? Yes. Is it worth 2700 cards? Yes. Is he worth all of the time and money? Well. that's negotiable. This Diamond Reward Michael Jordan really is fantastic, and is separated from nearly every card in terms of overall ability during game play. But don't think there aren't alternatives for MUCH less MT, like his 98 Overall MVP Edition, or 98 Overall Kobe Bryant. Although, in the end, this card is 100% "The G.O.A.T" and is well deserving of that title.

Really nice detailed review, but next time use the five line format plz.

"it's a trophy only obtained by hard work, dedication, time, and drive." this made me cry XD

Currently being less than 50 cards away from this I can absolutely say that I would never do it again.

Right now I'd estimate that on Xbox One it takes about 4.5M to do if anyone is thinking about it.

How bout now? Thinking about selling my team off to get him considering it's basically the end of the cycle

are you on ps4 or xbox? I was thinking about selling my team as well but i think I'd only have about 2 million MT to get around 2100 cards...

I'd guess more, the rare bronze cards will be harder to find now that the game is more dead, and the more expensive card prices have stayed strong if not gone up. Damn that card is worth it though.