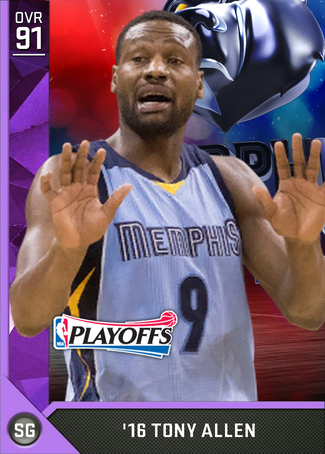 All my reviews are based on RTTP game play with a minimum of 5 games played.

Finding a player that plays great defense is a lot harder than finding someone who can score in this years MyTeam. When i saw they made the cards for the All-defense team I immediately purchased Tony Allen, and Avery Bradley. I run them in my starting five with Playoff Westbrook, Diamond DPOY Kawhi, and Playoff Millsap. I expected to enjoy Bradley more than Allen, but after playing quite a few games Allen is one of the better Amethyst cards I've played with. His shooting stats may turn people off and his shot is kind of weird/slow, but where he excels is driving to the hole and scoring. My first game with him i had 20-something points and i wasn't even trying to score with him. His draw foul is an 88 and believe me he gets to the line A LOT. His free throw release is easy and I've gotten a ton of green releases. His layup animations are really good, it's crazy the shots he gets to go in. Now his shooting stats aren't awful and he will make a mid-range if wide open, but i haven't done too well with him shooting. Of course the reason i bought him was for his defense and he is a fantastic defender. I play him at SF and he has had no issue guarding Lebron, KD, Harden, Jordan, or any other person he has been assigned to. He has great lateral quickness and good strength so even when people try to back him down he can hold his own. He gets tons of steals especially on driving dunk/layup attempts. I probably over-paid for him, but he's a card i really wanted and I don't regret it at all. Plus he comes with all the good defense badges and they're Gold.

Recommended Strategy: Drive with him, great on the fast break, use him as the primary ball handler for pick'n roll.

Use if: You need a defense player with a high IQ and great attributes

Don't use if: A sharp shooter

Bottom Line: Great player glad to have him on the team, worth around 30-40k, but if you wait a few weeks you can probably grab him for 15-20k since he doesn't have a 3-ball.

I was going to make a review on him but yours sums it up and more. The only thing is that I love his release, I use it on my myplayer so I am used to it and it is greens for days

Great review! This is exactly what the site is looking for. Keep it up!

Does he make three's?

I've only taken a handful of 3's with him in game. Maybe like 3 or 4 and i haven't made one yet. I have made some pretty deep two's though.

Thanks I think im gonna buy him. Good review

Is Millsap's height a problem if you play him at center? Anyways, great review.

Nope he out-rebounds taller guys and his strength is high enough that not many guys can easily back him down.

Should I get him or diamond KAT? I want a fast center with good defense and a 3pt shot.

Honestly i would get millsap and the amethyst KAT. both have great 3pt shots. The only thing that amethyst KAT's defense isn't as good as Diamonds

Avery Bradley or Tony Allen? I have avery but went 1-8 from 3 last game and most were wide open, although Avery has great inside game Allens looks insane, who do you recommend?

While I do really enjoy Avery Bradley, if I had to pick one it would be Tony Allen.

ok thanks and is his 3pt actually half reliable

Can this card play the 3

That's where I play him

Take a look at that strength rating