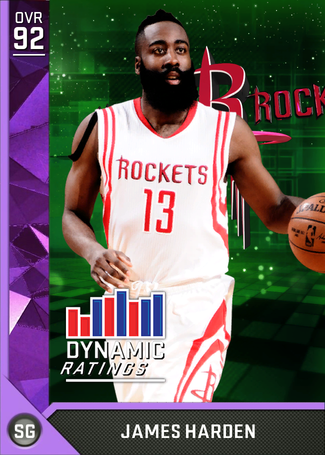 Being a huge rockets fan, I had to pick up this card. When I got him I expected him to be great driver and shooter and be not too well on defense and so far I've been correct. Even when he was made a gold he held up my expectations. His an amazing passer, the guy is my starting point guard. His defense is barely sub-par however since I use him at the point, his height makes it easier to contest a point guard's shot.

Recommended Strategy: As a great passer, run a couple of P&R plays with him.Also this card is an Iso monster, if the his opposition is a weak defender use Harden to attack as he will more then likely get easy points.

Use if: You need a great offensive threat.

Don't use if: You have a primary scorer already and need a defensive 2 guard who you'll only use as a spot-up shooter.

Bottom Line: Since this is a dynamic card, there is no telling whether the card will get better, but lately Harden has been doing great, could really see him going up in OVR. All that aside, the card right now is a great offensive juggernaut and if you need offense, get him, now.

He is playing greatly right now so i picked him up as i know he will be 95 if he keeps it up or maybe even a diamond , got him badged out + lockdown badge for 160k