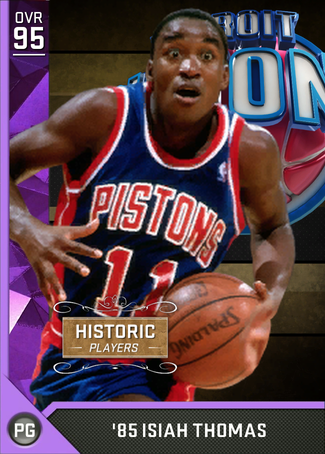 Okay so, this is my very first in-depth review with a player which means I will explain every strengths/weaknesses points of him more specifically for you to understand whether you buy this guy or not. I hope you appreciate this review!

I played him in RTTP and Gauntlet so most probably i could share you what's my experience with him.

Recommended Strategy: Let him hold the ball across the court, most of the time make a pick & roll with a dominant center who can finish nicely. (I'd suggest Cousins/Abdul-Jabbar/Shaq). Also you can let him wear shoes that can boost 3 point shooting (UA Curry's are the best option)

Other Comments: This guy is hell of a beast as a point guard, i had no idea why he's just 95. He deserves way more than 95!! Atleast 96 or 97. He carried Detroit in the playoffs along with Dumars and other badboys! He was even snubbed at Dream Team (because Jordan wouldn't play if Isiah was with them) but it's past i had nothing to do with it. I'd compare him with MVP Rose or Westbrook with their Athleticism, Inside Scoring, and Playmaking since they're very great with those.

Use if: You love pick & roll offense, an all-around point guard, who can defend, pass, and score.

Don't use if: You want a point guard who prefers to shoot 3's.

Bottom Line: Once you pulled/bought him, never ever take him for granted or sell it in auctions. This card will never ever disappoint you.

Great review, I have found him one of the best guards in the game.
Isaiah Thomas is not his son

great review helped me alot. thxs. love your work. keep it up