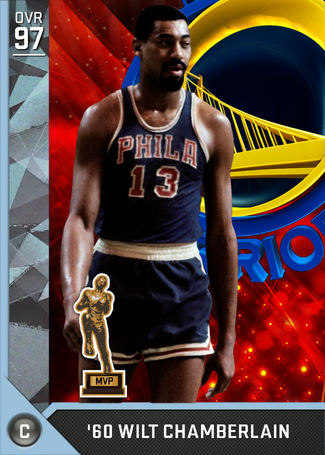 I was inspired. I never really had an OP dominant diamond center, I stuck with MVP Bill Walton (who's also very good) because I'd rather spend 250k+ MT on a versatile player I can run the floor with. What inspired me to get this Wilt, was the cheesy amethyst Playoffs Edition Bismack Biyombo, who my friend starts and gets him too many boards per game and blocks and dunks. Pissed me off hearing him brag so I had to put a stop to it, and sure enough, this Wilt did the trick.

My review is based off of online gameplay.

Other Comments: Though his speed and acceleration are way above average (76 speed/72 acc), it doesn't really wow me. He's quicker, don't get me wrong, but when people talk about his speed they make it seem amazing but it just doesn't jump out at me.

Use if: You want an athletic center who can nearly do it all, you base your team off defense or athleticism, if you want to win

Don't use if: You're looking for a center who can pop it from anywhere or likes to lose

Bottom Line: "Great value for money, nice player to use while building up your team."

hell yeah 2k was really slacking with alot of these cards