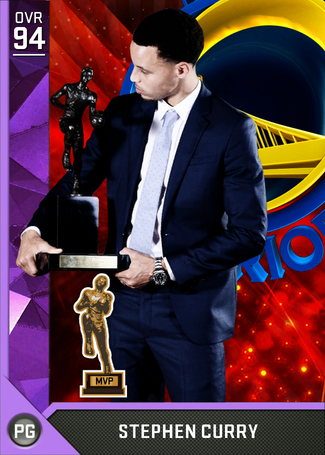 I REALLY wanted to try out this Steph once I saw his stats, plus after many nightmarish experiences with Current Steph and the most broken jumpshot of all time, I really wanted to have faith 2K would have fixed this card for his MVP version... I was sorely mistaken. And no, I am not a Curry hater just writing a bad review. I truly wanted this card to be at least half as good a shooter as it should be, but it's not.

Recommended Strategy: 1-on-1 Iso and use his quickness to blow past your defender and drive the rim, play full-court to get cheese bump-steals. Only pull 3s if everybody on the opposing team has died or is on the opposite side of the court and you get 20 seconds to allow Steph to think about his life before shooting.

Use if: You understand this guy is not the dead-eye shooter he deserves to be, you like to play aggressive defense and get to the rim.

Don't use if: You want a shooter to drain threes all day.

Bottom Line: Do NOT use this card if you do not have the patience to spend a long time getting down his release. If you have been thinking of buying a great 3-point shooter to destroy defenses, stick with Moments Damian Lillard (either) or SGs like Mitch Richmond. The time it takes to get down Steph's timing, plus the seemingly broken jumpshot as it is, is not in any way worth the MT.

Some players are more consistent, idk why. You're right, I hit every 3 I took w rose in the gauntlet and was shocked when I saw how low it was. I guess 2k prefers you to get it right on the line, which is a pain in the ass for Curry's release. People lime moments Towns, Archibald, JR smith, and melo are WAYYYY more consistent with 3s

Totally agreed idk what's wrong with him and I'm a fan irl. Also I have dynamic James harden at point and want a shooter to team him up with. Deciding between Mitch, KD, MVP Curry, and All Star CP3 what do you think?

I have Mitch Richmond as my starting SG, and honestly I love him. Very good release, 3-pointer really consistent (basically can't miss in the corners) and his midrange is honestly almost always a green even if you have no experience with his shot. Can also finish at the rim pretty strong and locks down on defense.

Chris Paul suffers the same fate as Curry with some sort of screwed jumpshot, which is why CP's current card was 20k after like a week.

Had to respond after trying him again. He is absolute cheese this time around for some reason. Using him with MVP KD and the team is just nuts. Only problem with this card is that I find myself tryna dance on fools and pop 3's in people's faces once he gets going lol.

They might have changed something, I still have Curry as my 2nd to last man off the bench and it does seem like he can actually make shots now. Still not nearly as consistent as he should be with a 98 three, I am much more consistent with guys like Amethyst Frobe who has a 78 standing 3, but Curry can at least hit some stuff now.

No problem, it's why they call guys like Patrick Beverly "Mr. 94 Feet", he's known for playing aggressive in-your-face full court defense. It works great in 2K.

Yeah, well since basketball aint such a big deal over here in the Netherlands *:(* I have a lack of basketbal knowledge...