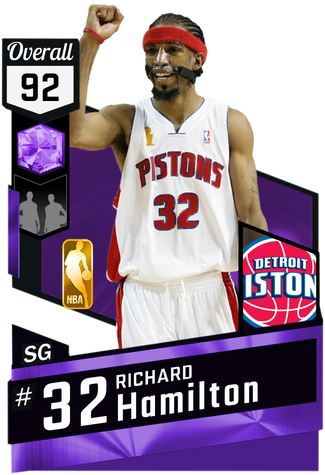 Good, but not great

Such a Good Card

Where is Rasheed at?
damn it BALL DONT LIE

Sheed is almost as difficult to get in 2k as it was to keep him from getting techs...

It's ugly a** Bill Walton

Sheed would have been a better addon instead of another Rip

My 04 piston lineup is incomplete

Rasheed will not give 2k permission to put him in the game for some reason.

I remember Gen Wallace... So dominate. I modeled my own game after him. @tupac when are we getting a Gen Wallace card?

it is ur choice lol

Sheed is playable on play now right? I swore he has a Trailblazers and Pistons player...

if they had shit cards last year that basically means they will get love this year. tony parker is a prime example

yeah in 2k16 they underrated him

With an 86 gold as his best card

no he had a 90 rewards card

That was a joke. Ik it's definitely

zemGOAT replying to the top comment is in 920 OT

cars does it and

The very first events card this year was a ruby Richard Hamilton. Why give us ANOTHER events RIP Hamilton when we could have gotten Laimbeer or Aguirre, who both don't have dominant cards yet.

Both of them are a part of the set. I would love a 90s Laimbeer at some point though.

I know they are apart of the set, but usually when they are part of a set and are higher up in terms of overall, they cost WAYY too much and they are mediocre to decent at best. Like ruby fucking Lamarcus aldridge.

Same. I want both

Opened 3 packs and pulled Ray in the third. Odds are pretty high for these cards. Open TBT packs

k i will try

did u pull anything?

i don't remember the names but two historic golds which are less than 1k mt. And you?

I didn't open any. prolly a waste

I opened two and got Ray

How much mt? Make your myteam lineup on the site and tag me. I'll help

wanna help me too bro. lol

Yeah. Make your lineup then tag me

Yeah I agree. I was doing some weekly challenges until I had enough MT to buy a pack. It turns out I pulled myself an amy rip Hamilton

Everyone with Ruby Richard Hamilton are on "My Auctions" rn

His ruby will go for 5k now

check out my gameplay review https://www.youtube.com/watch?v=L4WX-bHNb6U

Ruby is a beast, this is a must cop

has identical stats between him and ray allen

My bro @piercethesavage just got rip

I got that player today

umm were the event cards removed? i just went back to main screen then launched mt again and no longer see the empty events for rip and ray

RIP to your defenders

for throwback packs (pistons and bucks) they have added an event card for each throwback thursday pack openings.

so you can only get them in tbt packs?

not sure. I don't buy packs

I hope they are in league packs that would be awesome

Ruby Hamilton is mine!

Come on where is Rasheed Wallace

it isn't much better then the ruby one..

2003 redraft: instead of picking up Darko with the 2nd pick the pistons scoop Melo. Do rip & co repeat?

A LOT of ppl forget they passed on Melo after winning the chip smh...what could have been. Billups, Sheed, Ben, Prince, Rip...They could have had a dynasty. He would have fit in so well & probably matured faster/better.

not true.they passed on melo and then won the chip. they won the chip in darko's rookie season.

I know they won his rookie season. My question is do you think it's possible for them to repeat?

Remember that Tayshaun Prince was still very young at the time. I always thought if they'd gotten Melo that Tayshuan Prince would never have been the player that he became.

I love this card

im not hatin but why do they have the same player for two different events. also what are these events for specifically

WHEN UR GIURL LETS U USE HER ANUL BEDS

Just pulled him in my second pack. Hes a beast

he is always underrated by 2k players its like they pull him in a pack and he just goes straight to the auction house.

he's really good for his price

What event is this for

when he pulled up drop top and fucked yo ho

I got the card when it came out 2 times

Is anyone else going to the jersey retirement on Feb. 26th?

Who's better this one or ruby one, did this one deserves the 15k in PS4?

Don't let this distract you from the fact that emerald Jason Richardson has 3400 attributes!

You have to use him like he was used by the pistons. He just constantly ran around tiring his defender out until he had open 2s and 3s. Dude was klay thompson with his set jumper but at least visually was an extremely athletic and long endurance athlete even compared to his peers. Can't think of a player that has that skill set right now. Dude was clamps on defense never taking possessions off and always putting in his best. I never heard of coaches, players, or drama about him. Seemed like a really professional person kind of like kawhi, but that was years ago and my middle school memory may not be as accurate as I think.

Pretty much sums up RIP tbh