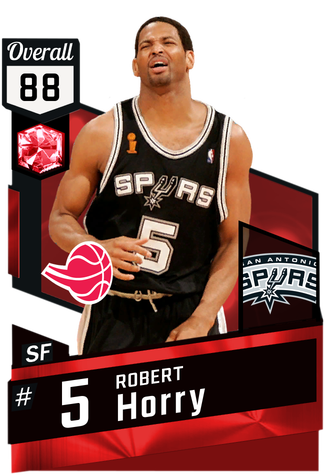 Must need against the CPU

100% most clutch player in Lakers history

I feel like you're forgetting Kobe played with the Lakers his whole career.

But Robert Horry had many more clutch shots in the finals than Kobe.

Kobe is the clutchest. Derek fisher might be clutcher than horry tbh and this is a spurs card btw

'Clutch' statistics for Kobe vs LeBron in games with 2 minutes left within a margin of 3:

If you actually wanna dive into the numbers...

And this goes back to my point to stop arguing with numbers. You can skew them any way you like to make anyone look bad. I could throw more numbers at you to make LeBron look like a choke artist when we both know that's not true for his career. Like in the last 5 minutes within a margin of 5 in the Finals, LeBron is 17/62 while Kobe is 28/63.

You seem to be using a lot of straw man arguments. Where are people overrating Kobe this much? I rarely see people acting like Kobe is the GOAT and most who do get blasted with downvotes in almost every NBA discussion forum I've seen. It's not a common belief if the majority of people don't really believe it.

Have you ever been on twitter? Kobe is usually a top 5 player on most people's lists & it's safe to say he's the most overrated player on there

Going to twitter for literally any kind of logical discussion for any topic even outside of basketball is a mistake.

Where else would u go for a basketball discussion besides 2kmtc then is what I would ask? Most reddit threads are in fact linked directly w/ discussions on twitter & other sites like Basketball GM have been long dead.

You can't discount the people on twitter & say that the majority don't overrate Kobe. There are in fact a majority of people who claim Kobe is the GOAT, you can't nullify Twitter discussion jus cause it's not ur personal preference of expressing ur opinions is what I'm saying.

And calling Kobe top 5 isn't really a terrible outrageous argument. At least you can make somewhat of a case for that. I don't believe it personally but I RARELY see people call Kobe the absolute GOAT and most who do get blasted by either downvotes or people calling them out. Unless you have some examples then I'm still considering it a straw man argument.

It's downright outrageous imo, you can't just simply put Kobe over those other All-Time legends w/o stretching ur argument to the extent where teammates are involved. And just cause someone gets "downvoted" or "called out" for their opinion on Kobe doesn't negate the fact that they still express their point of view of him being GOAT. In fact, you could make this argument just as so with any other player say for instance LeBron (just an e.g.) so idk what ur trying to insist there. I could easily say that u have a straw man argument as well since ur not solidifying ur argument either: https://twitter.com/UncleDrewGB/status/860327907469774849 (NOT TO MENTION GO TO ANY YT BASKETBALL VID W/ TOP 10 LISTS & KOBE WILL BE TOP 1-5 ON THERE)

>And just cause someone gets "downvoted" or "called out" for their opinion on Kobe doesn't negate the fact that they still express their point of view of him being GOAT.

I'm arguing the general consensus. This makes no sense lol. I feel like you're just arguing with me for the sake of it now.

I don't get your reddit point. Reddit while not perfect is a far better place for discussion than twitter. Reddit also has the advantage of useless discussion being forced to the bottom. Twitter in my experience is a terrible place to discuss basketball and the character limit hurts it even more.

My point is that Nba Reddit is basically jus links to Twitter threads/posts & that Twitter is where most of the basketball discussion occurs regardless of it's supposed accessibility due to the limit, the fact that u neglected it as a platform to discuss Kobe's performance is completely subjective.

Because Twitter is the biggest platform for reporters and players to express what's happening in the league. It's linked to reddit for that reason, not mainly for the topics of discussion. Reddit generates a lot of original content to spark new discussion. I never see on reddit someone linking a "Is Kobe top 5" discussion from twitter. I know what you're trying to say, but its different to what I'm trying to say.

And everything to do w/ Basketball in general, it's considered the biggest platform not just for FA news/signings but Basketball as a whole. I rarely see any reddit threads that discuss old topics or all-time rankings lists, they're mostly similar to Twitter threads & talk bout the MOST RECENT news in the league. Reddit doesn't generate fresh content or anything of originality, NOT even close to 2kmtc in fact (we have genuine discussions which are much broader than Reddit). I would say that Nba Reddit & Twitter are very similar in the content they put out as evident - https://www.reddit.com/r/nba/. What I'm sayin here is that u can't say Twitter doesn't feature logical discussions when most Reddit users are simultaneously avid Twitter users who talk similar subjects

That is how it's pronounced if you didn't know.

And Spurs. His game 7 shot against the Pistons? Epitome of clutch

The Laker card is better than this

L, one or 2 clutch shots doesn't get him most clutch player in lakers history. Kobe, Shaq, Magic, Kareem, with that logic D-Fish is the clutchest

He's hit loads of clutch shots you dumbass, and Shaq? How is he clutch? How many game winners has he hit? He's hit two afaik, that lob by Kobe, and that shot in the late 90s.

Also a Spurs card too lmao

what about fisher's 0.4 seconds shot?

Magic's beast game 6 as a ROOKIE?

BUT THIS GUY IS SAYING ROBERT HORRY IS THE CLUTCHEST LAKERS PLAYER? I DON'T EVEN THINK HE'S HIT MORE THAN 5 GAME WINNERS FOR THE LAKERS. SMH

Wtf 5 game winners is a low number? Especially that at least 40% of them came in the playoffs?

still not clutcher than Kobe and Magic

in the photo is seems like he's jerking off lol

nah he went to teams and made them better

have a better explanation

he was a role player, thats like patrick patterson going to the warriors and they win a chip, did he make them win the chip? no

well they didnt before he got there

spurs won a chip in '99 and went to the conference finals every year, the only lost cause kobe and shaq were dominance, when they had the feud the spurs won

When you regret making that Taco Bell run before the game.

HOLY SHIT! if this card is even close to as good as his sapphire, I'm gonna be corner cheesing for daysssssss

His sapphire is the best one in the game.

when she keep sucking but you already nutted

The face you make when youve opened 4 playoff performers boxes and have gotten 0 diamonds.

when you accidentally nut inside her

should be amethyst imo

His Sapphire was lit! Now THIS!

That face you make when you get swept in the western conference finals.

The world is not ready for this card

2 HOF badges!? This should be a amethyst or higher!

This card has more HOF badges than the Mamba unacceptable

if you really look hard at the stats, he isn't much of a playmaker

When 2k won't make you an amethyst card.

Play Making stats could be a bit better, but all in all, GRAND CARD!

he seems a fat ass nigga in this picture, look at that neck wtf

AND JUST WHY IN THE WORLD 2K KEEPS GIVING HIM SF AS THE PRIMARY POSITION?

When you wanna crack open a cold one with the boys but ya girl says no.

Now anyone can get a player who will make most of his threes. This will be cheese on MTO

Not hall of famebadges than kobe

His sapphire was cheese. Just imagine this one

This is dumb. He joined the spurs in the '03-04 season. But his best spurs playoff performance was in '05 against the piston in the finals. 2k needs to stop hiring kids that were 12 years old when these matchup were going on.

When there is 2 seconds left on the clock. Tied Game. I can either choose paul george or Robert Horry. I know who I would choose... HORRYYYYY

When you see how thick your neck is

sapphire was cheese but this is queso blanco

When u have a boner in the middle of class

When you nut but she keeps sucking

When She Hits A Split On Top Of You

The face you make when you want a new toy but mom says no.

ma, his defense will make him unusable! Basically no upgrade from the shappire

i've seen sapphire spelled a lot of different ways, but that's a new one :o