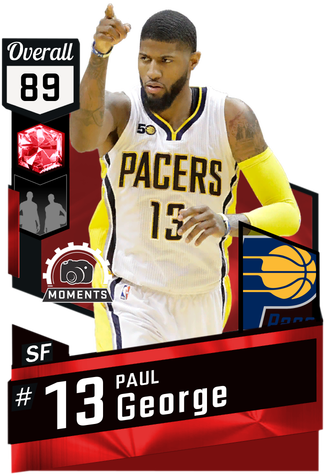 Steal of a Card.

This is an amethyst

just compare it to the 95 free agent card
this ruby is maybe even better...

We should have had this card 1 month ago but 2k is holding back thinking PG will do something better but gave up and finally gave it to him
Their doing the same thing with other players like kawhi and lebron and westbrook.

No im pretty sure they just hate their own cover athlete

I accidentally reported you. Sorry bro

Well I can be pretty antisocial at times

He has more attributes than Amy KD js

I accidently reported my bad

He pointing to his stats last week, that should have got him the ruby

If his sapphire already played like an amethyst, this card has to be beastly

I can't people are saying he's been trash this season come on guys. PG has been doing all he can to help Indiana for a playoff push..games like this solidify his effort

I agree. PG has been solid this year. Although, he has had some nights where he shot poor from the field (which usually negates a loss for the tam) but the real issue is the Pacers supporting cast. They really don't have any defenders outside of PG and Turner. PG has improved all of his shooting % from this year to last year but is down in PPG, RPG, APG, SPG, and BPG which people only seem to care about. Plus, he has a new cast to gel with and coach. With that being said, PG is mainly the reason why they WIN games.

They expected this team to win 50 plus games and expectation has not been met but you can't deny PG has played solid this season.

I agree he's been very good, but I think expectations for his were too high. When you say before the season starts that you want MVP, probably sets the bar a little too high. Also compared to last season I guess he's laid off a bit. Not much he can do with what they've got there though

Exactly what I thought. He's had solid averages just not a bunch of crazy games so we haven't seen a lot of moments cards. Same with kemba

Only 2 badges for the cover athlete? Wtf

right? That's why i've been so surprised they haven't been giving him cards...thought they'd be kissing his ass this year.
His FA card is the best card i've used though

It allll makes sense now haha
Hyped to get that card...sad that it will make me play a SF at PF which I hate haha

Yeah, it always kills me to put a SF at PF. Just any out of position players. Unless it's like Harden at PG or Giannis at any position lol.

Yeah I like more traditional PF's like Karl Malone or an Elton Brand, but they can get beat a lot if everyone is using giannis or kd or lebron at the 4.

Two favourite players in the league

Watch out this card is PG13

"i am on the cover of your game what the fuck"

Can i get some upvotes for being late?

Been waiting on this.

That sapphire PG is a beast, can't wait to cop his ruby!

I love the card design

Can't believe I'm so excited for a Ruby lol..

pointing to his teams playoff spot

been too long. can't wait to see his amethyst card!

I would kill my parents if they named me Paul George...that's an ugly ass name

I don't think people got the reference

I'm starting to remember that one now that you say it.

didnt see this because of all the damn onyx

FINALLY WE GET A DAMN RUBY FOR THIS MAN WELL DESERVED

upvote if you were ready for this card

Got badged up for 18k

its about dam time

What is his overall with the dynamic duo with Turner?

THAT IS THE ONE, THERES NO QUESTION

When u point to L.A and tell ur teamates that's where im going

This card is better than amethyst Gordan Hayward

I have the feeling this card is better than amethyst Wiggin

PG is an amazing person to comeback from that injury.

But how does he get a 93 ovr durability?

that injury had nothing to do with his durability, the dude literally wedged his leg in between the floor and the bottom of the basket at full speed. that would break anyone's leg.

This card is going to be so overpowered.

That low contact dunk though.
Someone put out a review before I buy this card just because it's PG13.

How can improve my lineup with 115k?

what updates should i make to my lineup http://2kmtcentral.com/17/lineups/483314/what-upgrades-should-i-make

you should try to get amythest giannis or larry bird if you can afford it, and

i was done i didn't mean to put the , and

This card is Georgeous :O