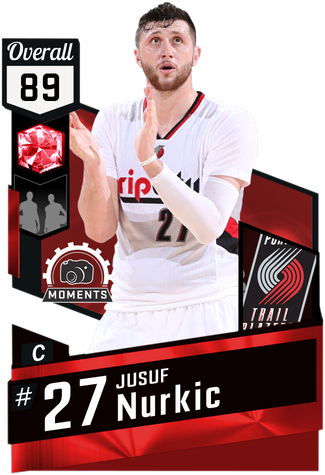 He had a career high... and JESUS look at those rebounding stats!

Nurkic was a terrible fit in Denver.

Wow put it on your resume

hes helped the blazers A TON

Him, Lillard, and McCollum could be a serious big 3 in the future

Totally! I'm banking on it. So long as they all stay healthy.... after Nurkic comes back...

I don't think it's shocking. It's more like the Nuggets had 2 good young centers and 1 of them had to go

Jocik is a power forward. He stretches the floor and has decent mobility. For some stupid reason the nuggets play him at center leaving the rim fairly open to attack.

Jokic is a center with the skills of a smaller player. They have a winning record with him starting at center

This card is also very similar to 91 Okafor

I called it... The Bosnian Beast

How about The Bosnian Gangbanger

Your team must be trash then

Nuggets fan is mad because him in Portland show good stats

But Nurkic better than Plumlee

Alright you got me with that one

And the Blazers got a 1st round pick. Great trade

John Wall has been done dirty yet again by 2k. Put some respek on my man and give him an amethyst. Heck, he probably deserves a diamond. Multiple 30-15 games with no moments card....

Predicting diamond wall as tbt even card for wizards

we can only hope for agent 00

2k won't pay him. Too cheap

Its not that they wont pay him, its the fact that he pulled a gun on a teammate. You think they dont have the money to pay him?

OJ Mayo is banned from the league yet he is still in the game....

Hes not banned, hes suspended for this season and next season. Also weed possession is a lot less serious than pulling a gun on somebody.

Not unless you fire it ;)

not sure if winky face means youre joking, but in most states and countries in the world it is a felony to just have a gun in your possession unless you have permits. Weed is a misdemeanor unless you have pounds and intent to sell. Not the same.

Here's the difference though. An amethyst John Wall will actually be used, no one, at this point if going to use a gold Joseph Shingles.

Oh, I'm sorry. I completely see now that John Wall should DEFINITELY get a slight upgrade for a few games he's already had better performances than instead of Joe Ingles who came up clutch for Utah AND had and insane shooting night AND is one of the league leaders in 3PT% AND has developed into a great perimeter defender AND is still stuck on this crappy card: http://2kmtcentral.com/17/players/4214/joe-ingles

Also, I don't think 2K cares too much about players people will actually use, because they DID just give us this card less than 2 weeks ago: http://2kmtcentral.com/17/players/20478/rondae-hollis-jefferson

Jesus making him sound like kawhi. Just let that sink in for a minute

Well, however it managed to come across like that it obviously wasn't meant to. It's true that Ingles is top 5 in 3pt% and has been noted for his defense this season, even managing to slow down LeBron in the Jazz's first game against the Cavs (which is all you can ask for from a bench player who was expected to fall out of the rotation this season).
That being said, he isn't even the best defender on his own team and CERTAINLY isn't on Kawhi level on either end of the floor.
My argument is that he deserves a better card than the absolutely terrible one he has now, not that he's even NEAR Kawhi.

Probably a saphhire maybe a ruby. His athleticism holds him back. Remember kawhi only has a an ammy so does wiggins. I think the greek freak only has an ammy too-not too sure don't have him yet. After those guys get diamonds he might get a ruby. His best chance would be a playoff moments cars

Woah woah woah, slow down there. I never wanted him to get even a sapphire, I was thinking about just a mid-to-high emerald, lol.

Most players got shit on. Lebron started out as a sapphire and still only has an ammy. Wade should have a ruby by now. He was the only consistent player in chicago and carried them to several wins. Aldridge needs a better card as well. Does isiah thomas have a diamond yet, if not he should. Not everyone is getting the love from 2k. Kawhi should honestly have a 96 or 97 ovr diamond by now. It's crazy that he doesn't.

With all the op cards getting released, one would think that moments cards would start getting at least a few badges.

I've been waiting on those badges. I can't afford 500k mt for 1 player. All my mt is locked in historic collections. Now i feel like I shouldn't have completed any of them except maybe 1 or 2.

Are salty nugget fans downvoting you? Because clearly they messed up. Nurkic just dominated Plumlee and Jokic last night, and overtook is previous team for the 8th seed.

Been so good for the blazers
His Defence, rebounding , passing and scoring has brought them to the 8th seed

Him, Lillard, and Mccollum are going to be deadly in the future

This dude literally handed Denver the L for the season. I really wanted to see Denver in the playoffs but can't complain with this Portland team. Too bad they get GS or SA in the first round.

He's one of the few old school centers. Grabbing boards and feating in the paint. No one expected him to dominate like he has. One of the best trades Portland has ever made

It's ok man I got what you were saying

Playmaking too low one of the best playmakers

Honestly I think the blazers won the trade for him, this man is a lot better then plumlee with the exception of his passing

What are you talking about? Nurkic is a great passer.

oh shit I didn't see that historic. Well, he doesn't have any moments yet

Don't get why cards in packs get like 5 HOF badges but moments cards can't even get one bronze...

good trade for the blazers, he is playing very very well

Who thought he would be this good this year

great season for him

Holy COW those rebounding stats OMG. I need good rebounders on my team! A must get for any budget team.

And people said it was a bad trade for Portland to get him. Always believe #RIPCITY

No one said it was a bad trade haha

Right after the trade SI released an article saying that the Nuggets won the trade... lol

unrelated..but where the hell is the john wall moments card??

Tomorrow is going to be a good day my fellow john wall fan. #tbtdiamond

The trailblaizers are a very good team, and this dude will help them out tremendously. He has amazing rebounding!!

Insane can't speak English and still is killing it

If the Nuggets GM sees this comment, I have something to say from all Blazer fans.

The Beast from Bosnia

this dude is underrated as heck. in the MIP rankings imo. great rebounder and defensive stats should be higher

you would think that 2k would give him some badges...guess not.

OH. He's gonna be fun the play with.

Hopefully @zemGOAT has not been here!!

How has derrick rose not got a ruby yet. And how how has john wall not got an amethyst. WTF 2K

And we thought Portland made a bad trade.

The second this guy leaves the paint, he is useless

His midrange is okay, but I was talking in terms of defense. I should have been more clear about that. My bad

ya try but when does a center leave the paint for defense, not very often

Every second game in MTO because everyone seems to love 5-Out.
Or when the guy you are playing against has a stretch 5 who is out in a 4-Out-1-In
Or someone with Dirk
Or when they run a PnR/PnP

Someone is in a bad mood. Did you forget to take your happy pills?
I was merely stating how due to this card's lack of athleticism, all of his positive impacts on your team will be negated immediately once he strays too far from the paint on defense.

Actually I did forget to take my happy pills

Seems like it. Now be a good boy and go have them.

Ask your parent/guardian to get some more

I will be angry for the rest of my life

Because the Cavs will never win another championship..?

Um, they're gonna win this year . Count on ut

If the any team gets an Upset on Cleveland Im gonna laugh.

Please dont down vote me

HOLY MOLY tTHOSE REBOUNDING STATS...
i hope Nurkic have a better carreer in the Trail Blazers than in the Nuggets

Yeah bad trade by them

That face when you score a carreer high points

"All I want for christmas is my two front teeth"

Ayyy the goat himself

THE NURKIC FEVER
JUSUF GETS A RUBY

He's on of the most underrated centers in the league

Flooding in Queensland but I still have to get this card.

Holy shit he's come out of nowhere since the trade.

I really didn't see Jusuf becoming anything too impressive but I'm glad to say I was wrong. Love to see players straight balling

Being a Portland fan I'm so happy that he broke out and made such a difference.

He just raped his old team...

Should have Hustle Rebounder at least gold maybe even HOF

MASON PLUMLEE IS THE GOAT

i see him having a role like bosh did in miami

Becoming a big 3 with Lillard, Mcollum, and Nurkic

why did i get downvoted for this

I didn't downvote but I'm guessing because you spelled McCollum wrong maybe? Honestly I wouldn't take it personally, the 2KMTC community is retarded and most don't know anything about basketball

ikr. Since nurkic joined the team he has been playing incredible and he is only going to get better. Lillard and McCollum are already one of the best duo's in the league and they got a steal in Nurkic. I honestly think if Nurkic keeps improving then he could mabye end up making a couple all star games in his career.

if the nuggets didn't trade him, they would be a champtionship contender in a couple years

He never played well alongside Jokic, sometimes guys just don't mesh and you need a trade to bring out the best in a player (or in this case both of them). Nuggets definitely didn't get enough in reutrn for him though, this dude is nice!

Please feel free to rate / check out my lineup if you have some free time or just bored. Just joined this site.

when you're in the playoffs

Him, dame, and Cj should be the first people to have the dynamic duo effect but with them 3 like if you agree

He has trash defensive stats.

How can someone have 95 standing dunk... but only 40 driving.

Because he's a center. Centers are not known for their speed.

when you're cheering on your underrated bench

L for giving yourself a W