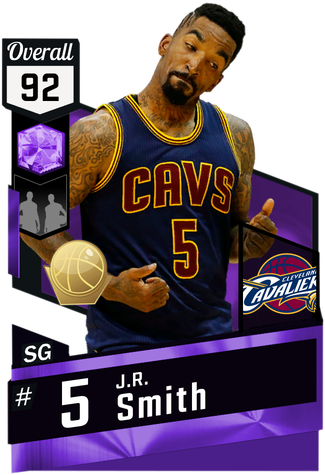 Better than most diamonds.....

This dudes a glitch

BEST RELEASE IN THE GAME

99 shake hands in the middle of the game

No shirt> shirt on for J.R.

"The Pipe" > taking it slow

throwing up gang signs> making a play call for J.R

JR Smith's photo is missing because he is busy celebrating

The warriors took 3 Ls in a row

Warriors are the scrubbiest broken team in the NBA

Should be 100 Contested and 25 open shot

99 Not wearing a shirt

Why is his steal so low? He be stealing other players shoe laces at the free throw line.

Why is his steal so low? He be stealing other players shoe laces at the free throw line.

You must have a high steal rating for stealing my comment

You should be stealing a ban

dynamic duo with jason terry who has released today?

its the exact same HAHAHAH

It appears as if he came back now, though it looks like he doesn't care about what people are saying

not kidding, but now he is going for a little less than a 100k

i will consider getting once MVP packs come out. Cuz those badges tho

Dynamic duo should be 94 Jason Terry

99 almost throw away games against pacers

I hear this card glitches your controller and makes it a huge delay when shooting. If he's open and you press X to shoot his player won't actually shoot the ball till the defender comes to contest the shot.

It's like when you pass it to Justice. He does the back step fadeaway contested instead of the wide open shot

and his jersey disappears

I got it today. It just doesn't do that

and it will always be some weird animation. Like he can never shoot it normally, has to chuck it up in some weird way

You tried to hard

Thank you my kind sir

and got so far. in the end, it doesn't even matter

It's totally true though lmao

Jr left the card to go look for his shirt.

99 only shoot when someone is 30 feet inside you

I was 30 feet inside your girl

no point in making jerseys, he wont wear it

Jesus look at his badges

Basically diamond T-Mac with better badges, but slower with worse draw foul. Going to be a monster.

J.R Smith is looking at his hands like: "Which hand should I hold my Hennessy in?"

RELEASE THE DIAMOND KOBE ALREADY HONESTLY IT'S BEEN LONG ENOUGH!

But still, yeah sure

IK but they need diamond so people who enjoy him and idolize him can use them on there myteam instead of the few people who actually have the pink diamond. And if you look at the unreleased players on 2k theres the 95 diamond one if they could at least release that that would be amazing!

That's not available to players it's only in domination

This JR is the definition of "CHEESE"

Of all people, they gave JR SMITH a 98 offensive consistency. bro give me a break

THIS CARD IS AN ABSOLUTE MUST COP

This card is insane

Of course his contested three is better than his open

He just kept raining threes, it was the game when we broke the record for most threes in a playoff game with 25.

99 dribble and turnover in a stupid situation

this is going to go for 30k or more

You know that JR contested threes gonna be higher than the standing shot... Junior dont miss those limitless

damn i hope this card goes for cheap. will be so OP in blacktop

Smoked his way out of the card

These shooting stats are actually insane!

Jr smith has a higher driving and contact dunk than diamond lebron .. ok

Remember how he couldn't hit a 3 the whole regular season

When J. R. has a better card then Kyrie

does he have 99 shirt off

THEY LISTENED TO US AND JR

2k just got the pipe

Nope. Gotta wait for the defender to close out so you can try for the highlight shot.

Damn I hope they gave him the silver card's shooting form. The emerald and sapphire's release doesn't look like his at all

You watch his highlights and so many of his threes come with a hand in his face. It's pretty insane honestly.

Ok so the game is broken...

Seriously I needed this card

Not to mention his 96 driving dunk, a must cop amy

How he has a better three pointer than curry unexplainable

An amethyst is about to go for 200k lol

J.R cards are always op in 2k, can't wait to try this one out

This is a historic playoff??

99 stupid behind the back pass

if there was one man in the league deserving of 99 contested 3pt shot, it was this man, c´mon 2k lol

2K got really lazy they are still Recyling card photos

How much does he go for. At the time I'm typing this it doesn't say

I just pulled him off a single, he's on the market for around 80-100k on Xbox one

This card is unfair… the guy you are playing against wont want to gard you because its JR and contested shots are better, but if your open, you can still shoot.

its a gg every time

We should get this card up to 420 likes.

What past game/series is this from

Ronnie has created a Monstar

In case anybody was wondering, he has the same card pic as emerald J.R. from 2K15.

I would replace Tony Parker and Tun JR at PG. I have TP and Im not a big fan of that card. JR is as good as u would think with those insane shooting badges plus ball control and dunking. Definitely a must cop. This is only amethyst I use the rest r all diamond. He is my instant offense off the bench.

You think J.R. Could Play PG With That Speed

Bro same all diamond, 2 pd, and one Amy JR

Probably Paul George or Pierce. Pierce is a better shooter than PG

How much is the fish

He will drop it was only 1 day

Can speed boost, godly 3pt ratings, HOF Limitless, this card is getting picked up SOON.

This card is lit

Boi you've been injured the whole year you think you can come into the playoffs getting new moments card. You trash, I hope you tear your ACL and get swept by the Spurs in the Finals...

When she's looking for the pipe

Where is the option to play without a shirt? Isn't this the card from last year's finals?

When you realize you have more HOF badges than PD Dwade

99 Three with all them HOF badges lol

Should I buy him or get a Diamond Peja Stojakovic? I can only buy one but I'm still undecided tho

But jr, he has way better defense

99 Contested Step Back Fade Away Off Balance Full Court 3pt

2ks card be like. 99 dont give pacer players hall of fame badges consistency.

that face your dad gives you when your 5 years old and he catches you doing something bad at a birthday party.

i don't remember cleveland j.r. being this good but this should be an amazing card

99 shoot three and miss when you need to hold the ball when wearing a knicks jersey.

Upvote if you think 2k shouldn't make everyone amazing shooters if they make 3pt impossible to make in games.

Shooting is easy you just suck

Best amy in the game

99 turnover because of behind the back with 3 seconds left

99 Celtics play dirty against him

99 get carried by Lebron

Bro jr is a role player and lebron a superstar. What do you expect?

If only it were a diamond...

I don't give a shit about price. I'd like to have a better version of J.R.. Kill yourself, you fuckin idiot

Tbh I wished he was a diamond as well. I pulled him off a single pack and he took diamond hardens spot in my lineup. His shooting is ridiculous. Plays like a diamond pretty much

Thank you. Why wouldn't you want to have a better version of this card

na bruh we just want the amt version so he can be our budget SG and he's a hidden diamond so 92 is actually super amazing. 2bgout