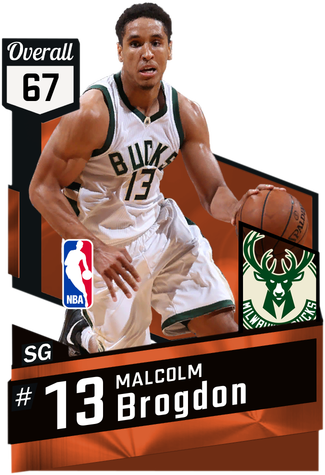 He deserves a moment card
dunked on kyrie and bron

Give this man a new card... My god

yessss he needs a gold

He got a ruby, so, that happened and then some.

Only 56 Driving Dunk!?!?!
But he posterized Kyrie and Bron Bron

This card was made before that

He did? Post a video I need to see

you dident see it

WOW! IT WAS AWESOME

Lol just saw it it was lit! BTW I hate lebron cause I'm a celtics fan

Well... your name is Westbrook but drafting
No offense but it would be like me saying I'm a Heat fan

lol I wish KD was still here but I ain't mad

I can see why he left... you guys weren't really going anywhere tbh. You needed one more guy

This boi deserves a Moments card

He was such a steal from the Bucks

Second rounders are proving so much lately. Josh Richardson was an essential piece of the Heat's rebuilding process last year after LeBron left and became the 3rd seed. His minutes have grown now that Wade is in Chicago and Tyler Johnson is basically a backup point guard now. (Dion Waiters never helped with that) Norman Powell has showed he has major potential, but for the moment he is backing up DeMar DeRozan. Brogdon is the favored rookie to win ROTY. Manu Ginobili, Paul Millsap, and IT, the last pick in the 2011 draft, are only some second rounders who became stars. Next thing you know, there is going to be an all star drafted from the second round. I do look stupid, but you will believe in my futuristic vision by 2018.

Draymond Green and Khris Middleton, for example. Adam Hanga is the DPOY of the Euroleague. He will be a Spur next year

Or not, because the Spurs are being fucking idiots

Hey! You found me here. You deserve a slap