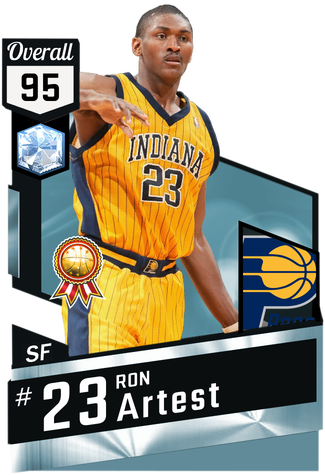 So much for Metta "World Peace"

And when paired with Michael Ryan,earns badge Innocent Attack

When has brawl starter badge he will elbow James Harden if he is on the court.

99 punch random in the face

Actually, a fan (who was actually huge Pistons fan and got banned from attending home games for life) threw a cup at an already heated Artest (who was simply trying to calm down after a near conflict just moments earlier) but Artest punched the wrong guy. I'm not defending his actions at all, but the fan clearly knew Artest had a bad temper and purposefully tried to get him wound up.

EVERYONE UPVOTE THIS 8 TIMES

you don't want this card?

25 is the lowest, but Artest is the exception

That's too easy for artest

what about gilbert arenas as an oponent?

if arenas had all his guns?

Artest vs Draymond would be the true marquee matchup

Picture should be of him punching a Detroit fan.

Where's his current Lakers card? He made the team!

get him if the opponent using james harden

The Pacers probably would have won the championship multiple times if the Malice at the Palace hadn't happened. It's sad that one annoying fan ruined the careers of so many players.

That fan didn't force Artest to go into the stands

if you dont think its the fan's fault youre an idiot or a pistons fan.

No one forced him into the stands at the end of the day. He didn't start the fight but he didn't have to go up there

But the man threw Diet Coke at him, who the heck throws coke at someone trying to stay away from continuing a fight

i pray for his kids when they get bad grades

99 go up in in stands and punch everyone in sight

Ron Artest always deserved a card like this. Just to think of what he could have been...

He achieved his potential what are you talking about?

how? he didnt get to play the whole season

That took place in 04 right? That year he was DPOY and an all star

The Malice occured 7 games into the season after than. He could have been an even more insane player if he didn't get suspended, because he was averaging career highs across the boards in the first 7 games of the season, with over 24 ppg. His career was never the same. He only averaged 20+ ppg in one season after that. with Sactown.

Dynamic duo should be a pistons fan

Or maybe Jermaine O'Neal - I believe he was the one who also jumped up into the stands with Artest wasn't he?

no it was Jackson!!!! O'neal knock out a big fat guy right in front of cameras on the floor!!!

Every Time I see this card I picture Stone Cold saying "I'm gonna open up a Can of whoop ass!"

Really good 3 and D guy, he needs a 3 point shoe though

Is he elbowing someone?

Why is their no league card for this dude?

Enforcer
Can wreak havoc on the floor with tough and physical play.

Not only on the floor, also in the crowd...

When you change your name to "Metta World Peace"

He sold his NBA championship ring to raise money for a mental health charity that tries to get more psychiatrists in schools.

When you're desperate for a high five..

I need this monster

I mean you equal lame

how do u get him

We need Ron Artest vs. Willis Reed in the octagon

Has the Ankle Breaker skill but he gets his ankles broken. I've never seen him break anyones ankles before lol.

If he wasnt suspended he couldve been the mvp easily. What a shame. 99 Artest in the stands

i hope you're kidding

Don't worry I am kidding

Also I think 2k should make a laker card for him.

this shit is gonna be annoying asf to matchup against lmao

How much mt does this collection cost?

Ever since Artest hit James Harden with that elbow, Harden hasn't been able to play defense.

Only a 93 strength???? He's alot stronger than that, ask the Pistons fans.

Were these stats based on Artest's performance before or after the brawl?
I'd say during.

Does any know that he has a silver ankle breaker?

They obviously meant to give him HoF fan breaker.

why the hell does he have a ankle breaker badge

pistons fans on that day were too scarred man.
PTSD

I swear to god if they don't update him with HOF defensive stopper...

Please tell me he has a decent release

He got that 99 elbow durability ask Harden

Best defensive card in the game...

I just need byron scott to get this card. Defensive machine.

Where is his league Lakers card

I am a savage

Am i a savage?

boi.... If you have to ask, you're obviously not