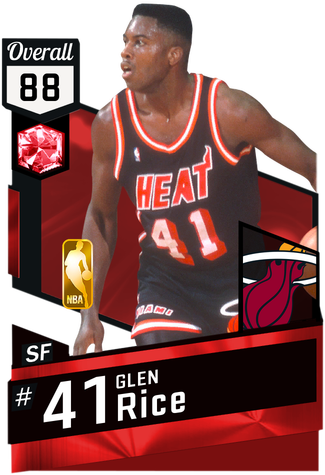 There should be a hornets rice, but this card will do.

now u got your hornets rice, good luck getting all those rubys from the deep shooters collections:D

i got all but ray ray from one box lol

This man had a great career, no doubt.


Rookie season, 89-90, played for the Chicago Bulls, a pretty good way to start in the NBA for a rookie at least. First game in the NBA, 13 points; and 4 rebounds. Yeah it's average even for a rookie. That season he would have 12 20+ point games, but did not win the Rookie of the Year.

His third season is where the eye caught me. After JUST 2 seasons playing, he averaged 21 points.


Then, he became an all-start. Not once. Not twice. But three times! He averaged more than 20 each of those three seasons. And his second year he averaged 26 points, a career high! He had 25 THIRTY plus point games! I am not even gonna bother to count the amount of forty plus. In a win against Boston, Rice scored 48 points.As @basketball2k16 said above, "Rice in his veins." He also added four rebounds and an assist.


Then to the Lakers he went. LA would be his 3rd team.


He wrapped up his career with the Knicks, my Rockets, and a stint with the Clippers. His glory years were with Chicago and Charlotte. He finished his career playing exactly 1000 games, averaged 18 points; 4 rebounds; and 2 assists.

Played for the Chicago Bulls? He never did.

no he played for the Charlotte Hornets (CHH).

This is also one of H4k33m's favourite players.

Got him, and he's freaking good! Great all around player, he finishes well at the rim, if not, his FT and 3pts are money.
Pretty good defender too because of his lateral quickness.
i assume it's one of the best SF currently available.

Just sniped this guy for 17k still deciding wether or not to keep him, at this stage I have a good but not great team so I think I will look to sell

Did you end up trying him out first?

Yeah, good call for a daimond

Rice in his veins @Kevin35Westbrook0

They need a hornets glen rice.

Just got him tonight. I guess this will be my budget Hornets Glen Rice since I can't afford the other one.

He's missing the fade though, bald ass dome like he had when he played on the Hornets

i play this card at the 2 hes a beast

Just picked him up. He's like a ruby Klay Thompson. I would say even better than his amy hornets card last year