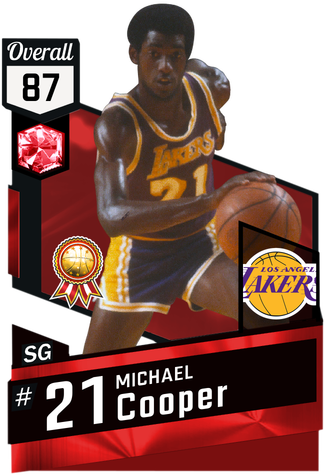 He can play pg and sg

It says he can play PG under the card not SF

i hate players who are 6'4 or lower

i made someone quick sell thier muggsy lol

Yeah, in his best offensive season he made 89 on 39% shooting

Thats only a tiny bit over 1 three a game

Just for open 3, none of his other 3 ball stats should be very high =

Only for OPEN STANDING 3s, he never really shot contested or off the dribble 3s

Yeah, being his worst three point shooting season, coming off an injury, and the cavs overall not trying in the regular season. He also took many more threes than Cooper, assuming what you told me is right

In 2016 Kyrie actually only made 84. And Cooper actually took a much higher percentage of his FGs from 3

Last year Kyrie only played 53 games, that's the difference. I also looked up Michael Cooper's stats. He really didn't even shoot the three ball well for most of his career. Only had 3 seasons over a 35%, while Kyrie has played for half of the time Cooper did and was over 35% every season except for his most recent, and he still hit the final winning three.

Not the shooting ability I would like from a shooting guard. None the less, he will be my starting shooting guard Friday. He is a lockdown defender.

Will be comin off the bench for me, I like my SGs to be fast af

This card will be mine later on today .Hopefully there is some fast easy challenges

Can someone tell me who comes after him please???

Who's after Kevin johnson

How do you get this?

Weekly challenges. He is after Robert Pack.

I'm guessing it will be from weekly rewards

I don't want to be an ass but the challanges don't get harder at all. Just finished them with my emerald lineup and defeated the Lakers by 20.

lol all challenges are very easy

Just get your focus on and you should be able to beat them easily. Do smart moves, don't get mad. I beated them today in the second try by 16 points.

This might be the best budget balling ruby in the game, or at least somewhere in that region. This card can shoot a bit, drive, and is probably one of the best pure defenders at the shooting guard position in the game.

until you use him in domination.

You mean until YOU use him..

And....I was accurate.
I speak the truth.

wait...this is in the same collection as the domination and historic domination rewards so who do you get after you get all 5 tokens for him?

Willis is a god tho, I would say top 5 center in the game. Thanks for the info I will get him in a few weeks

guess i'll find out in 3 weeks

guess ill find out in 4 cos i fuked up twice

If I didn't do any of the weekly challenges does that mean I missed out on all those tokens? Didn't realize that was the case so I just played other things and would eventually start doing them. I hope I don't miss out on a good card or two.

To be honest though I find myteam boring this year, Anyone else agree or is it just me? Honestly 2k17 in general. I have been playing a lot and enjoying it here and there but it just isn't the terrific game I thought it would be :( A lot of problems in the game.

Nah, there will be still weekly challenges going for a least a little while longer. I only really find myteam interesting. I generally don't play My Career. I feel unless I wanted to stream or youtube, or if you're really into that sort of stuff. 2K also get pretty useless with content after a while so it will be interesting to see if they continue with these weekly challenges after Michael Cooper becomes available, and if they continue to do bring out new collections every two weeks. After a while, I get bored of 2k as well. I find domination and challenges to be the most interesting part of mt. I don't play much online due to the lag of 2k and my internet being a piece of shit, and blacktop is lame as well. It's not skill, just who can be the cheesiest throughout the match.

yeah true, I do think there will be weekly challenges every week until close to the release of 2k18. I was just wondering if it's possible to do the weekly challenges that I missed, assuming I won't be able to. Idk this year's game is boring. I always thought mycareer, domination, and challenges were very boring but I always did them to get the rewards or upgrade myplayer. Not to mention the 2k servers are terrible. I get lagged out of mypark games, pro-am never has a full 10 players, it's always only 5-7 players. I sometimes lag out in myteam or the game itself is just lagging so it is more annoying to play, especially in mypark where it mostly happens.

wonder what the reward after this is

I hope it's a really good amethyst player

the collection has the domination rewards after him and robert pack

the steal is gonna drive me crazy

Don't let the three, steal, or passing fool you. He does all of those things better than I expected.

yo he clamps up anyone you put him on

who is the next reward?

why is his steal and block so low he got so many steals and blocks watch his highlights on youtube! they gave him pickpocket but only a 65 steal

Pretty solid card, definitely worth getting. His offensive stats look bad but he plays better than you would think. He also has the cheesy hesitation 1 which makes this even better!

He is one of the greatest sixth men of all time. Als he is a great defender and even won a Defensive Player of the year in 1987

He should have higher playmaking. He had a few seasons of nearly 6 APG with less than 2 TOPG

this sob got that defense. good backup

I need this card

I assume you have to get Pack First

this dudes offense is ass

His dunk should be higher. "CoopDaLoop"

He can play pg position?

No Charge Bookbunch
an Eclectic Reader comments on good reads – books and articles
Skip to content
HOMEWELCOMEANOTHER ANNUAL LIST (2014-16)MORE MUSINGS FROM 2016READ BETWEEN THE LINES (MY MUSINGS)LOOKING FOR A GOOD STORY?CHILDREN’S AND YA LITERATUREHISTORICAL FICTIONMYSTERIES/THRILLERSNONFICTION BOOKSTHE ANNUAL LISTS OF BOOKS READ 2009 TO 2013TRAVEL MEMORIES

Hamilton – The Script
17-lin-manuel-miranda.w529.h529 Since my chance of seeing the Tony award winning play Hamilton on Broadway with the original cast are impossible (key players leave the cast in July), Lin-Manuel Miranda and Jeremy McCarter’s book – Hamilton: The Revolution was the next best option. Winner of the 2016 Pulitzer Prize for Drama, Lin-Manuel Miranda’s musical Hamilton uses hip-hop and rap to tell the story of Alexander Hamilton, the poor man who fought the British, defended the Constitution, and helped to found the United States. Full of page-sized pictures from the play, the book itself is large-sized, with the actual script, margin notes, and background information.

As I flipped through the pictures and then slowed down to read, Shakespeare came to mind. Charles Lamb wrote Tales from Shakespeare, with the Bard’s words “translated” to make the stories of Shakespeare’s plays more understandable to young readers (and anyone else needing notes); Miranda and McCarter did the same with their book Hamilton. The script includes margin notes deciphering the action and sometimes explaining the inspiration. The words follow the hip-hop beat, reading like poetry most of the time, creating its own silent music.9781455539741_p0_v1_s192x300

With chapters interspersed throughout the script, the authors follow the play’s progress as it developed in the writer’s mind, including tryouts for some of the scenes and songs over the six years before playing Broadway. Miranda’s inspiration for lyrics easily adds to the drama, and the tour behind the scenes on costuming and tryouts provides better understanding of the the play’s construction. At times, the prose gets heavy with modern political asides, teaching moral lessons along with the history lessons.

More than once I found myself researching Hamilton’s role in the Federalist Papers and the Constitution, in the creation of the banking system, in his relationship to George Washington. His famous duel with Vice President Aaron Burr is well-known, but I did not recall studying the Reynolds Pamphlet when I was in school, or the scandal of his three year affair. Miranda shows it to be the beginning of Hamilton’s decline. Amazing how history repeats itself – affairs and scandals and payoffs.

Miranda admits to poetic license in creating a few characters who did not really exist, and in romanticizing some aspects of Hamilton’s life, but for the most part, he got it as right as the history books (which are constantly being rewritten) allow.

I still want to see the play someday – must be amazing to hear those words and feel the beat of history.

Enter your email address to follow this blog and receive notifications of new posts by email.