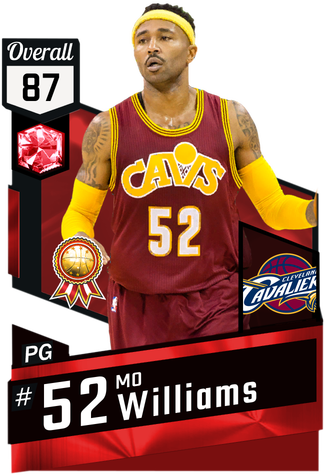 when i get it imma pile it up

And of coarse I dont get him...or the other 2 rubies in my board...

I need him bad (favorite player of all time xd)

You'll be excited about his Sapphire I take

He's a bit slow but his 3 ball is money

How is he slow? He has 93 speed with ball, and 82 speed is pretty fast tbh

Is he good? Besides the speed of coarse and yeah its a little bit slow

Yeah 93 speed with ball is slow

A Jason terry without lay up

Aye just pulled him, anyone want a review?

I do. Is he money from deep?

Thats very nice :) Just started grinding blacktop. Hope I get him on my board and that Ruby Eddie Jones looks beastly aswell.

Saw your lineup and it looks very solid. Ill grab Big Ben the next time I go to the Diamond Board. Couple of weeks left until that purple Kevin Johnson ;)

I need to update that, I've gotten diamond Chambers and diamond Thompson since then :P

Loool.. Even deadlier. How does the Skywalker play in MTO? Cause a lot of people have been complaining about him and I could use a super athletic 2.

Yeah, I knew about his problems and I figured they were true because I had the same problem with his amethyst last year, but the one thing you should know, is he's not meant to be the star. He's meant to be a reliable role player. His speed with ball is like 88 too, so yeah, he's not meant to be your star. His athleticism feels lower than his stats say because he's a player from a long time ago, and older players tend to have slower animations for dunks and shit, but he definitely slams it on people sometimes. Only reason I took him is I needed a better shooting guard, and none of the other diamond rewards interest me, but don't get me wrong, he's a pretty solid player, I'm not disappointed with my choice.

Mmh, so technically if I have a very good player maker as PG, he turns helps out a ton? I have the Rudy M.Cooper (very underrated), that does a lot for me but still lacks offensivelly. I will update my lineup soon (just sniped Ruby A.D for 25K on PC :) )
Will you be nice enough to check it out and tell me your thoughts?

Yeah he fits well with a playmaking PG, still shouldn't be your star from his sub par shooting but still very worth it imo

how do i get this its a must have?

Blacktop, he just appeared in my deck

Uh no. Mo was the OG Kyrie. He ha handles, could drive, and shoot, and was quick.

This will be on my team asap

"someone said mo got it back"
Iman Shumpert

This shot is on my team