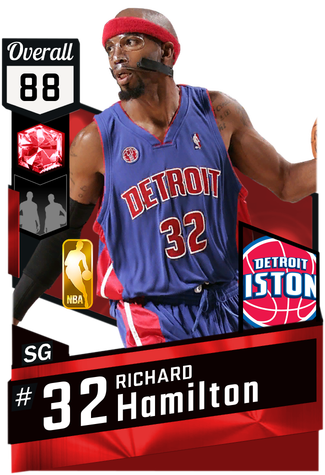 All around Goat -Vid-

A MUST COP FOR BUDGET SQUADS!

do you mind giving me suggestions
http://2kmtcentral.com/17/lineups/89533/suggestions-i-have-150k-xbox1


Go to forums rather than clogging up the comments.

actually, i just put in captain pack as shooting guard, and it gave me this. So try that, and it might work.

SO you just get this card from opening league packs?

Yeah just pops up along with another player in a pack

Yeah I figured it out

Great card and he'll be cheap since he'll be pretty common for a ruby. Already going for 30-35k MT.

Hes awesome, and his price will increase when he is taken out of the packs!

he is going for so cheap go pick up NOW!!!

wow all these mid range ht zones with a 92! looks freaking great

If only Rasheed was in the game :(

I got him and ruby Anthony Davis in the same pack

What's your problem dude, yes you can? You realize how dumb you sound?

yes you can, when you pull this card you also pull another player

Good D plus a three ball? Too overpwered

Wish this had more badges

Is it rare to pull him?

Defensive stopper ? tireless scorer ? shut kobe down and put up 30+ a couple times.

I've used this Richard Hamilton for 12 games, and I already hate him. This guy doesn't make mid-rangers, he doesn't score 20+ for me, and he even misses open 3's and mid-rangers with no one on him. Therefore, I'm going to sell him since Thanksgiving is almost here and I can get a player than him. While Richard can make difficult shots, he doesn't make the ones that count, and he's often not a valuable shooter. This Richard plays like a gold or worse, doesn't even play like a ruby.

wait... you only play with players who score 20+ for you lol?

I seemed to have the same trouble. I've played much better with cards with stats that were worse. I just never could hit my groove with Hamilton. I got him originally, sold him later, picked up another and tried again and eventually sold him again. I can't say he's a bad card because many have played well with him and love him. He just isn't for me personally.

You know I will keep him until the time is right, somehow he is amazing at finishing at the rim, and that's what I need for a shooting guard.

hows this cards release? last year it was a bit slow for me.

I remember pulling this guy and I was like WTF is this? I was so hyped. He really works in with my team as he is well-rounded with both offense and defense.

I wish Richard had a Bulls historic card

Would be the best all around ruby if he could rebound

Rebounding isn't all that important in a SG, so he's pretty much a beast

DOES ANYONE KNOW IF WE GET TO KEEP HIM FOREVER?

Keep him his a great 3 and d guy, pretty much all you need from a SG

He is good, get him

Omg so all around

He one of my fav players

so you open a pack and you get that card for free? if so then it is like the free agent Kevin Garnett that you got for free