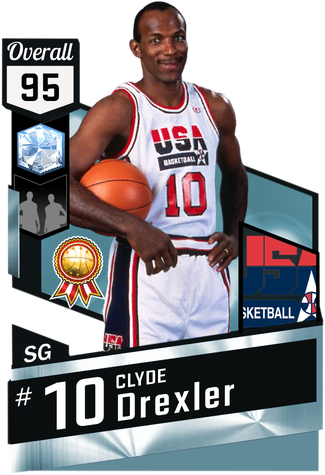 As another Team USA member, this card is OP AF. I've got this card buy pulled 6 20-pack boxes on the first day (got 2 Rose, 2 Wilt, 1 Kidd and 4 of those 6 amethyst cards from them, feels worthy!) I replaced my Diamond Harden by him, and set T-MAC on bench. Curret line-up as link shows. I've played 2 MTO games with Glider, got 21-3-5 average in 2 quarters per game. 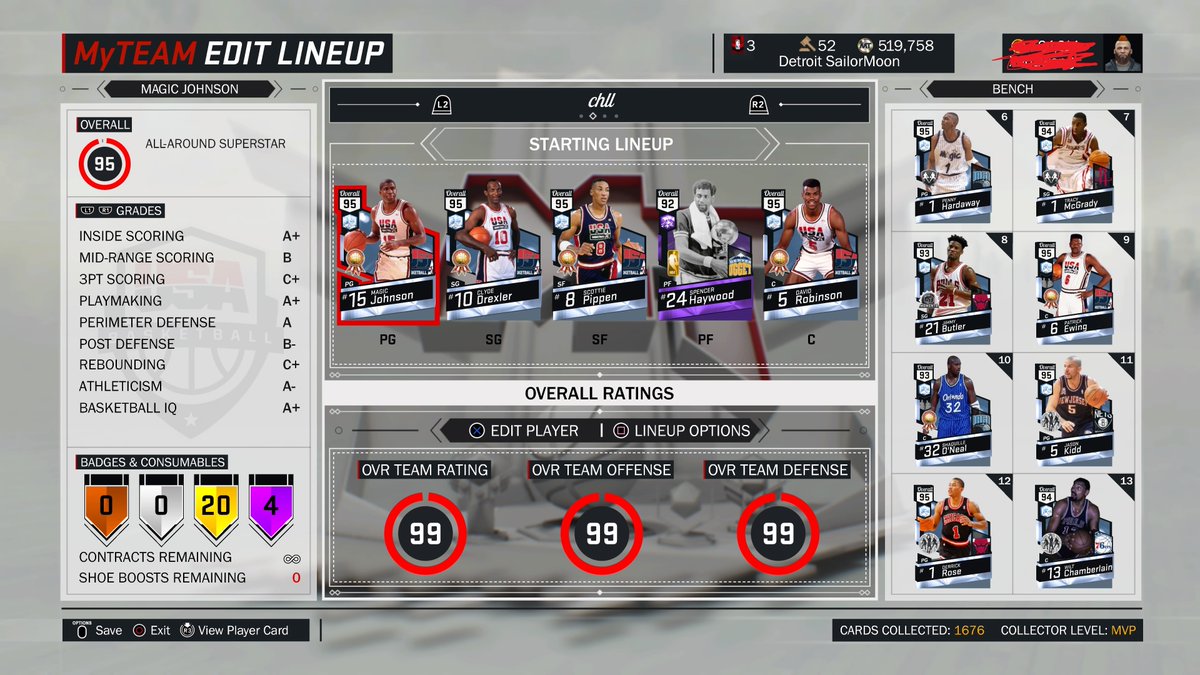 Just like the package named, he is so "all around". He can score inside/outside of the lane, pass, rebound, . Flat out, the best SG currently if you're not a "dribble n 3" guy.(Unless you count PD Kobe, then he's 2nd best.) This card is actually a PD, 2nd most total attributes of 4073 after PD Sir Charles.(They lower the overall by intangible.)

Recommended Strategy: No need to force using him, he's powerful all around. Call plays, drive 1v1, catch and shoot, mid-range pull-up, post moves. Very easy to get 20 pts even with my line-up.

Use if: "You want an athletic all-around SG, and familiar with defense & plays."

Don't use if: "Your play style is dribble around pointless then shot 3." or "you don't care about defending."

You spent a lot of money on this game huh?

Around 600-800 excluding the game itself. I was a self-sustained auction sniper until the wingman pack. Yes, I spent $300 on this set alone but got 700k MT extra by this $300 also. So totally having 1.2M MT now, hopefully will not pay any buck on next 2 USA team members.

he spent 300 dollars on this collection alone lol

cant really get a better lineup

Isiah is good and popular here in Detroit. But I like tall Gs tho.

And? So is Magic, Pippen, and almost everyone on his lineup

I'm just saying his lineup is the best

BRUH UR TEAM IS AMAZING

Are you aiming to complete the team USA collection and have the dream team as your team?

Trying to, but not sure if it's achievable.

Do you have the rockets clyde drexler to compare to? Is he that much better than the other? Also, what brand of shoe does he wear?

No, I don't have the Rockets reward Glider. I was collecting wingman set during the time rocket pack on the shelf and was think about to buy that this week, then they released this one.

Oh, and what brand of shoe does he wear?

I don have a diamond shoe for him now, so his wearing Kobe XI this week.

Nike, speed with ball or open shot 3 shoes will be sweet on him.

Is Haywood good? I noticed his the only Amy in your team

Elite in offense, short but fast. I have AMY pf's but tend to use him cuz he's fast and all-around which matches more with my play style.

all i gotta say is holy shit man

99 ovr everything god dayum what league you in?????

Was focusing on MyPark, just started MTO since Jan. No at Diamond League.

i got 150k mt who should i buy bro ? somebody i can use around

Bro, I like your line-up. PD ZEKE is OP AF, you have decent backcourt, what about get a better backup SF like Amy Carter? I got a Carter last week by 144K.
And I feel AMY LBJ is somehow not as good as Diamond Grant Hill offensively.

IGHT thanks for the help bruh!

Why do you not have ewing at center and robinson at the 4. Did you not know how money david robinson is from 3 when he's open. He's probably the best stretch 4 3-point shooter in the game right now. I have made roughly 65% of my 3's with him in over 200 games taking at least 2 - 3 3 pointers each game.

I'm flexible when play, it's just a standard line-up. I do use David Robinson as stretching 4 & shot 3's sometimes. But more often I just play defending n fast-breaking, so a faster 4 is better suitable in my case. It's all depend on match-up and the day I wanna play in which way.

Probably, I'm not playing as much as I was in college on 2K5-2K9. And surely my skill and game setting familiarness are not at top level. You can beat me easily with an average AMY team if you're really good on 2K17.
But the good part, as the more time and effort I spent on working is got way more money able to spend on games, so it might be the one and only time I would try to get the complete collection of 2KMT cards. Playing this as a hobby not for live.

Also you should have two bronze players on your bench so you dont get matched up against as good a team.

Sure you can, but I choose not, fight as a man should!

you know I actually have recently taken your thought process here and as I've gotten better since the game came out I am not noticing any difference at all. As a matter of fact I can make sure I have two lockdown defenders in those spots who are mismatches in case the other team thinks they can magic, giannis, or porzongodcheese me.

Yep, you always need a backup plan to match up those one who want match up you.
Lockdown D is an OPAF badge. That all my current roster has it.
Thx for replying just reviewed my roster in this review, unfortunately, no one even in.

*want to mismatch you