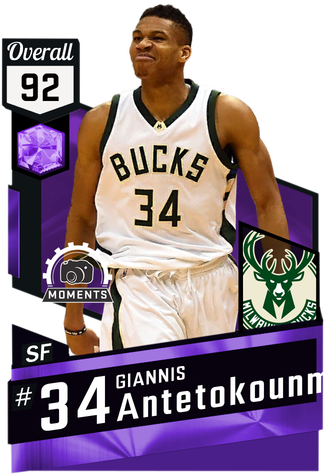 This card is absolutely amazing. Its amazing because it can be used in so many ways, just like the ruby Giannis. It is extremely cheesy. I think this is the cheesiest amethyst player in 2k. I've played 6 games with Amy Giannis and he's averaging 23.8 pts, 7.8 reb, 4.3 assists, 1.3 steals and 1.8 blocks at Point Guard.

Strengths: Scoring: Crazy finisher inside, Giannis will put up a strong layup or dunk. Also has a 97 draw foul, making it easy free throw opportunities. Has a 90 free throw so he won't miss often. A great mid-range game, with a 94 open mid and a 90 moving and contested mid. Has a decent 78 3pt shot so he will hit threes more occasionally now.

Defense: Great perimeter defender and can defend any position. From Point Guard to Center, Giannis is capable of containing his defender. Also has a 92 steal, will steal easy passes in the lane for a fast break finish. Has an exceptional 83 block, meaning he can block smaller defenders with ease.

Athleticism: Very quick on the court, especially for his size. Most people his size won't keep up with him. Also has a 90 acceleration and a 95 stamina and hustle. Expect Giannis to be all around the court. Has a decent 89 durability, so he can withstand many minutes on the floor.

Playmaking: An amazing playmaker. One of the top small forward playmakers in the game. Giannis has an 85 ball control, an 81 passing accuracy, a 88 Passing IQ and a staggering 89 speed with ball. The Greek Freak's playmaking is on point, better than some point guards.

Recommended Strategy: Try to score any way you can with Giannis, it has a good chance of going in. Defend any position you want Giannis to defend.

Use if: You want an all-around superstar on your team that can do anything you want.

Don't use if: If you want a spot-up shooter.

Bottom Line: An absolute beast on the court. One of the best amethyst small forwards in the game so far.

nice review! I pulled him but sold him for 163k I was debating on keeping him but decided not to. was that the right move?

yeah cause he's expensive af right now. Hopefully he drops below 80k at some point

Hes going for like 55k now and the same in the range as paul pierce and paul george now. You glad you sold?

Yeah i doubt it now. One can hope though. He looks dope

nah. he looks cheesey tho

thats what im talking about.. this card is worth it and i hope it drops to 60k at least.

He's just ridiculous, it's not even fair. Loved Ruby Giannis so when I saved up enough I bought this bad boy and oh my god. 37 points in his first game, all you have to do is euro step pretty much from the 3 point line it's not even fair, and-one's for days!!!

I'd recommend selling him. His price will drop with ease.

Pulled him in packs today

Thanks for the review!
Is he worth the MT if you got an outbadged ruby Giannis? I can read the stats but Im asking for performance.

I run him at SG and he is just a cheat code. Meaningfully better than Ruby Giannis which is hard to believe.

not really... depends on the opponent's pf too. if he has a big man lineup with two c in the pf and center position its a little difficult. but in pg sg and sf he is a beast

I don't think he'd have the same success outside of PG