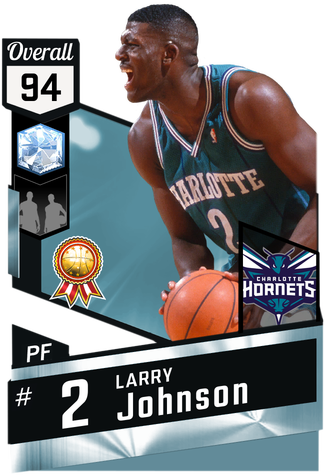 All I have to say is WOW. Larry Johnson is a straight beast in this game. I completed the Hornets set today for about 100k to get him. I already had the current hornets players so it was fairly easy to complete having 120,000 MT.I played about 4 head to head games with him so far. Larry Johnson is probably the best obtainable card in MyTeam right now. He is such a difference maker on my team. He could shoot the 3 ball, shoot the mid, hit post fadeaways and hooks, rebound, defend, and pretty much do anything.

Bought for: Completed the Hornets set for about 100k

There aren't many weaknesses in Diamond Larry Johnson's game. The only weakness I could think of is his speed with the ball.

Recommended Strategy: He could do anything, just don't try to handle the ball down the whole court with him. He could score in many ways.

Use if: You want an amazing all-around Power Forward that could do it all

Bottom Line: This is the best card I used so far on MyTeam. He is so fun to use and is a great asset to any team.

His jumper is absolutely nice. Has range beyond the line, great hot spots. Moreover I've seen that defender tend to sack on LJ?! No idea why, but he often gets "open" jumpers. He's a beast on the boards and in the post, too. His passing game is awesome, too. Double teams have merely an effect on him.

The only flaws I see is his mediocre ball-handling and his lateral quickness. But thats still fine...

Thanks, and yeah he can't handle the ball like an Antoine Walker, but you don't need dribble moves to get to the basket with him.

im interested in getting this card. does it matter that he's fairly undersized for a PF. does that affect his ability to score from inside with layups/dunks? thanks

It really doesn't matter that he is undersized for a PF. His strength, speed, and vertical really make up for his height. He is a great finisher for me, he dunks the ball a lot and makes contact layups. My favorite thing about this card is that in transition he has the best tomahawk dunks.

Have you played with anyone similar to him

np. any other reviews you have?

How much did he cost you?

100k, but I did the set on the first day he came out. He probably costs a lot more now.

Great review, totally agree! And he is absolutely my go to guy on the attack! He's currently averaging 17.8 PPG for me over 46 games! And his post moves are possibly the most overpowered thing since the Curry-range 3 pointer patch last year, I genuinely never miss with him from the post!

Thanks a lot, and his post game is really insane.

To be honest his speed with ball is actually pretty good for a pf. I'm able to blow by other 4s with him pretty often. I seriously doubt they'll be a better pf for the rest of the game.

Don't wanna be that guy, but how do you do get him?

You have to complete the historic Hornets Set, check this link out http://2kmtcentral.com/17/collections/318/hornets-franchise

Spot on review! Crazy how great this card is all around. Like a more athletic Diamond Draymond Green. And he's a stud at small forward.

Thank you, and yeah he is an absolute beast, I actually scored 43 points in a game with him yesterday. He is outstanding. He is such a bully in the post to opposing small forwards that play the power forward position.

Great review, thanks for your helpful insight! I really appreciate it!

No problem, glad you liked it.