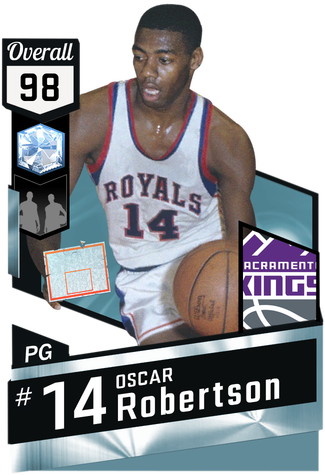 There are no words to describe how purely god like this card is. He is literally 1 attribute under Pink Diamond Kobe. So I knew this card would be God-like from the moment I saw this. But this card... this card truly deserves the title "One of a kind". I have never played with a card this good. This card, literally, does everything.

Bought for: Pulled out of singles pack

Playmaking: He feels like magic in terms of size, but has the speed of Curry in terms of handles. He has so many ways of getting pass your opponent, including an extremely cheesy post control that just demolishes every point guard not named Magic. His passes are extremely crisp as well and he can actually launch the ball down court with pretty consistent success.

Inside scoring: If you so much as throw yourself in the direction of a defender, you will get the call. Like, it doesn't matter who is inside the paint. Last game I played, I got 7 and-ones against diamond Yao (I scored 56 with Oscar this game) The main reason? His post game. His post control, fade, and hook is devastation incarnated. This card KILLS off-ballers as he literally, spins off of every point guard (except magic) and with 85 strength, just bullies them. With relentless and acrobat both being hof, there is little to nothing you can do except learn to play defense/change your matchups.

Outside scoring: I knew this card was going to be trouble with a 3 pointer but this is ridiculous. His release is very smooth and easy to learn and not only that, but this card PUNISHES anyone foolish enough to sag off.

Athleticism: This card is an absolute demon on the court. He is so smooth and comfortable to use that I even start to off ball usering him, not because my defense is bad, but because he is so fast yet controllable and has good size. He is very comfortable to use and it actually hurts me to switch off of him at times. But that isn't all. His rebounding is insane, and if he gets the ball, it's over. Hall of fame one man fastbreak on this card is a glitch for there are only 2 options for this card on a fastbreak: you score or you passed it. All you have to do is run down court and take a contested layup and bam, free throws or and one.

Defense: His size, plus speed equal nightmare for opponents. Best thing is i can actually leave him in against magic and other cheese players like tmac and carmello and clamp them up with easy. Because of this, he is ideal to have at the 1.

None. There are literally, no weaknesses to be found within this card. You really just have to be better than your opponent to get one over on this card.

Use if: You want the most complete player in 2K history.

Don't use if: You are comfortable being a lesser player

This is the only card, in all my years of ultimate team (2K, Mut, fifa), that truly does...

This card looks GOD. He's better than the collection REWARD! :) Thank you very much for the extensive review!!!!!!!

Which badges would you add?

What badges should i add?

Does he go for dunks over layups?

Generally he'll go for layup in traffic (which results in either a make, a foul, or both nearly every time), but he will definitely throw it down a solid amount of the time (yes he gets contact dunk animations) when he has a full head of steam and a path to the basket

Did some major sniping the past few days and I ended up getting this beast!

Thanks for the response. Ill probably never be able to afford him tho.

Good shit I never pack anything good. I have to go through phases of gutting my team and rebuilding to get who I want.

i mean i opened 4 boxes (XBOX gift cards for my birthday) and i got oscar, yao, and a fuck ton of rubies

Damn nice besides Butler my only diamond pull was Blake but I had already sniped one so it was meh. I took advantage of the vc sale and traded some games in and sold most of my team to get Carter.

I heard his relase is slow. How slow? Can you compare to somebody? Westbrook, Currry or somebody else?

its like westbrook speed, I was bad with him at first but then i got used to him, i Had him back in 2k15