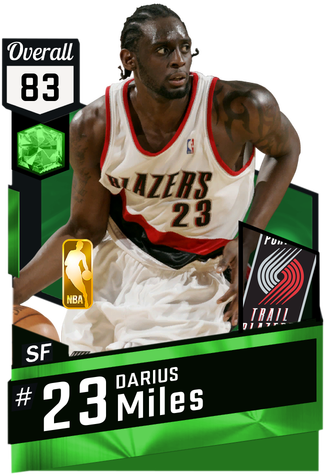 This man is a straight demigod. I ran him at my SG while i was grinding through domination and here's how he played.

-Post Game- Mismatches for days, spin off the defender and dunk like a boss, or post him all the way to the rim for an easy And-1 or just a nice layup. Sweet Post fade too.

-Rebounds- will beat any guard or forward to the ball, 96 vert. ( yes even Lebron he is faster than LBJ)

-Dunking : Great dunker, put gold Posterizer on him and ITS OVER LADIES AND GENTLEMEN, ITS OVER!!

-Passing: He isnt Magic. Makes dumb passes if not standing still. ex: Driving toward the lane and throws an alley-oop, He'll throw it behind his head to Jay-Z in the front row.

-Free throw: Great at drawing fouls, not so great at shooting the free throws though, mostly he goes 1 for 2 at the line.

Use if: You want to make the opponent rage

Don't use if: You have a ruby or diamond at SG or SF. Or need a passing forward

Bottom Line: I call him Zeus