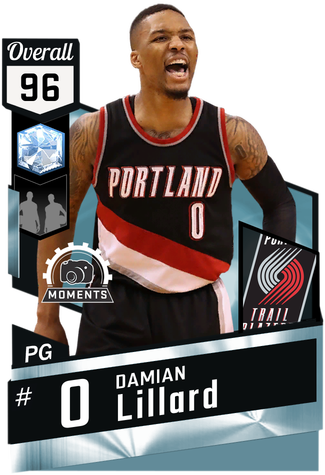 I remember some great memories with the 97 overall diamond Lillard in last years game. I was literally rage quitting players because of him. It turns out that this Lillard is even deadlier on offense than was he was last year. I have played a total of 5 games with Dame and he has put in some total work. He is currently averaging 25.4 pts, 3.2 reb, 5.2 ast, shooting 55% and 53% from three.

Strengths: Scoring: One of the best point guard scorers in the game. A total phenomenon from inside the paint and outside the three. Inside the paint Lillard can take contact for an and one or just dunk it on anybody in his way. It also helps that Lillard has a 97 draw foul and a 96 free throw, helping for clutch moments. Also, whenever Lillard shoots a three, it has a great chance of going in, open or contested.

Playmaking: Has great handles to burn point guards on drives. I have faced multiple amethyst Curryʻs and Lillard just drives past Curry every time, thanks to a 95 speed with ball stat. Lillard also has great ball control, also at a 95. As long as you make good passes, you wonʻt have any turnover problems with Lillard. Also, he can break some serious ankles with his step back.

Athleticism: Dame is super quick on the court, with a speed and acceleration of 95 respectively. Lillard also has a great 98 stamina. Depend on him in late games, he will still have energy to give out at the end of the game and become clutch. Also has a 94 vertical, helping him dunk on anybody in his way.

Defense: Lillardʻs defense is decent. Unfortunately, his steal is at a 59, not as good as the other Lillard last year. Besides that, as long as you are good at on ball defense, you will have no problems on defense with Lillard.

Weaknesses: Rebounding: Dameʻs rebounding isnʻt really concerning to me, even though his rebounding stat isnʻt really all that good. The only time Lillard is in some trouble is when he faces off a Westbrook. But, he is a point guard, so you donʻt have to worry about Lillard grabbing every rebound.

Use if: You want a phenomenal point guard scorer that also is really fast and is acceptable at defense

Don't use if: You want a point guard who grabs a lot of rebounds.

This guy or Diamond Nate Archibald?

him or amy J.R Smith

Amethyst Isiah Thomas better than both of them

Isiah doesn't have an amethyst smfh

I said Isiah u idiot

well maybe I thought you misspelled it, "idiot"

he didn't tho lmaoo

Great Review! Are pack odds good now or should I snipe?

If I was you, I would try to snipe it
The packs odds are hardly ever good tho... lol

Yeah pack odds always suck... Thanks for the help i'll try to snipe it tho.

lets be honest, no one really uses point guards to get rebounds.

he be trail blazin dimes everywhere

How does he compare to 98 Westbrook?

If you want an Offensive scoring machine i'd get Lillard. But if you want defense and some offense get Westbrook. I think Lillard can play D fine though.

yeah, lillard is fine at defense as long as you are good at on ball defense

Westbrook is way better; lockdown defender with a 99/98/99 off the dribble 3 with jordan shoes on; i green the bitch like jimmer all the time.

His defense is terrible compared to westbrooks. Offense is the same, dame has a better shooting release

not good.only 59 Steal and 70 Reaction time

No brainer, keep Oscar. Oscar is the best all-around PG in the game. The only PG with Inside/Outside Off. Def. And Rebounding.

I been shooting bad with him recently do you guys think its because 2k was changing shooting I saw that Mike Wang said that he changed it back again.

Pretty sure he changed it back yesterday. Try him in a freestyle shootaround to make sure.

I just did he is greening everything, i gonna keep him pretty sure nest PG in the game

how many minutes were you giving him

i was giving lillard around 18 minutes i guess...

Hmm... maybe i wasnt using him right but i found his diamond card last year very inconsistent. He was my starting point for a while before i decided to go with playoff westbrook whom i found to be so much better and can hit shots more consistently

Hey I got this guy in a lucky pack today and sold the Amy curry because I only need Steve Francis and dame dolla . I also got that Amy curry right before

Thanks bro and selling the curry gives me 50k mt for more packs/players. My hands were magic today lol

where were u you werent at school