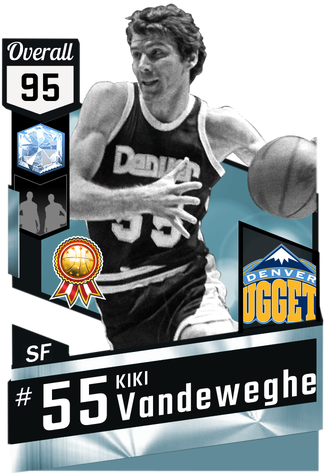 Kiki Vandeweghe is the collector level reward for collecting 1400 cards in MyTeam. You may think I have ripped open an insane amount of packs, but that is not the reality. I only opened 450,000 VC worth of packs the first week for a solid basis of MT for sniping. I literally pulled 4 Lebrons and 2 Stephen Curry, plus a great amount of Emeralds. I made 150,000 MT from selling everything. I spent hours on the auction block sniping cards and flipping them. I then took pictures of completed jersey, court, coach, and logo collections. You must then compare your collections with the completed collection. I paid no more than 500 mt per jersey, logo, and coach. Try to fill in these collections as thoroughly as possible. I spent about 100,000 mt filling in all of the jersey, logo, coach, and court collections. Without these items, I don't think you could reach this card.I bought about 200-250 of these items.It takes a lot of hours, but I just have to say it is extremely worth this beast of a card. He is the best Small Forward you could get in the game as of now. I watched Lou Hudson gameplay, and I have to say, this card blows him out of the water.

Shooting Release- Kiki Vandeweghe has a super fast, easy release to master. It is faster than Curry's shot and I get more greens with him than Curry.

3pt and Mid-Range Shooting- Kiki Vandeweghe is an outstanding 3pt and Mid-Range shooter. On the Catch and Shoot he rarely misses. I really think he can't miss an open shot if you have the release down. I always get swishes with this card.

Contested Shots- Kiki Vandeweghe will often hit some crazy shots you wouldn't believe would go in. If a defender is in his face sometimes, his shot will just fall because of his great stats and release. I am not saying go force up any shot with him, I am saying he will occasionally hit crazy shots.

Shot Off Dribble- I really like Kiki Vandeweghe's shot off dribble. It is really nice and he creates some space from the defender as he elevates. I make a lot of shots off the dribble with him and it is money most of the time for me.

Finishing Ability- Kiki Vandeweghe is an incredible finisher near the rim. His 95 driving layup really shows in the games. I always green layups with him and occasionally get and-ones. I probably average about 2 to 3 and-ones a game with him.

Draw Foul- Kiki Vandeweghe always gets to the line for me. He is always getting fouled and his amazing free throw always accounts for free points.

Post Fadeaway- Kiki Vandeweghe has a beautiful post fadeaway. I like the release point and timing of it. He is 6'8", so sometimes he could easily release the ball over smaller players.

The only weakness I could think of for Kiki Vandeweghe is his rebound. Every else about him is pretty much spot on.

Recommended Strategy: His catch and shoot ability is amazing. When open ,he will always knock the shot down. Try to get to the basket with him, as he will finish contact layups and get and-ones. Also if a smaller defender is on him, try to post fade because it is a really great move he has.

Use if: You want the best Small Forward in the game as of right now.

Don't use if: You want to waste a crazy amount of time sniping and buying every single jersey, court, etc.

Bottom Line: This man currently has a 64% field goal percentage and 60% three point percentage for me. He is averaging about 24 points a game for me and is the best player on MyTeam along with Diamond Larry Johnson. He just puts up crazy numbers and doesn't miss any open shots. He also hits contested shots occasionally. I have never shot 60% from the three point line with any individual player over a 15 game span.It is just ridiculous how good this card really is.

@DetroitPistons32 Do you still have those pictures of the completed collections? I cant find any on the web. It would help serve as a checklist cuz I really want this beast of a card. my emails [email protected] if you can help me out. Thanks

Here they are, https://www.youtube.com/watch?v=zdWSW8ES3Mk just pause on each section you want to look at and write down the ones you don't have by looking at your collection at the same time.

Thanks for the advice. Im at almost 900 cards now so I gotta keep grinding. Too bad i suck at sniping.

How much would it roughly cost to get him?

I don't really know, because beforehand I used to snipe courts, shoes, jerseys, and coaches all for 250 mt. Plus I am almost finished with domination which accounted for a lot of my cards. I just tried to get all the items for 500 mt or less. At the start of NBA 2k17 I knew I wanted this card so that is why I spent hours on the auction house. I guess if you want to buy every card needed for him from 0 cards, it would cost about 200,000 to 300,000 depending on how good of a sniper you are. It is well worth it because you get a bunch of sapphires, rubies, amethysts, and diamond elvin hayes before you get this card. Don't expect it to be easy, because it was really boring staying on the auction house day after day. It is well worth it though.

The jump from 750 to 1400 took me 180k. It all depends on how much time you're willing to dedicate. Longer you spend the cheaper he'll be. Hope this helps.

His release is a little slow for me, im used to releases like the ones that pink diamond isah and q-rich have