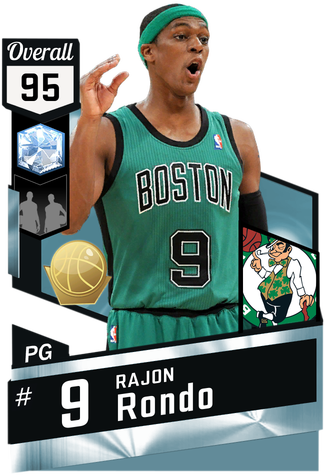 Best PG in game with Duo

I've used 98 Westbrook and diamond Oscar and this is an honest opinion of how I feel about Rondo based off how he plays with duo boosts from Pierce.

Defending- ever since I got him my opponents point guard isn't scoring, I versed a dude with diamond giannis at point guard and he shot like 3-12 and had 5 turnovers even with the height disadvantage Rondo manages to defend!! After 7 games he is averaging 2.5 steals a game.

Weaknesses; I can't really see any weaknesses to rondo, I thought his height would be a problem and it really hasn't been his 3 ball isn't high but I'm shooting 50 percent from there simply because I don't force them and he has an easy release.

Recommended Strategy; Drive inside and don't be scared to force mid range shots, on defence his not a fouling machine so just attempt that steal.

Other comments; I don't know what his like without the duo boost but that huge driving dunk boost paired with a Gold posterizer badge is so deadly, he literally posterizers 7 footers at least once a game for me.

Use if: You want an athletic playmaking point guard that can shoot and defend.

Don't Use if; you prefer the more expensive options just too flaunt how much money you have put into this game.

Bottom Line; Great value for money, only around 60k, overall he feels just as good as 98 Westbrook did for me at about 200k cheaper.

so you'd recommend him over Oscar? I'm considering buying both, and I already have Pierce. I was about to buy him before the duo came out, and then once it did his price jumped 20k

His price has gone back down to about 60k. I would recommend him but if you like tall point guards get robertson

yeah you could play Oscar at SG if you still want them both, but Rondo just plays better for me than any point guard I've used and if you do get rid of him, the tax is nowhere near as bad as all the pricier options

Hey! Great review! Have you ever experienced problems because of Rajon's height? Can he handle Oscar and Magic? Otherwise I'd go with Kidd who's 6'4. I love tall two-way PGs, but I already have Pierce and that 99 fade is calling me..!

Hey mate, sometimes you will experience problems with his height if someone like Oscar or Magic post you up, but most PGs do with those two, you will find most people won't handle the ball through their PG anyway when rondo is around it really doesn't matter what a players ball control is he still makes steals, I got 8 steals against a diamond d-wade at point guard because my opponent wasn't playing smart and trying to dribble or post up on Rondo over and over... And yes Pierce becomes even better with that boost, it's a hard duo to pass up on

Hey, great review!! How often do you get block when finishing at the rim? Is size ever a problem for you?