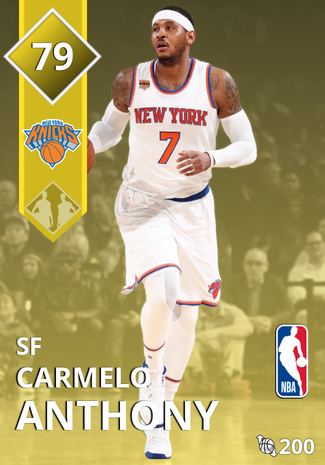 Best Player in the Game

All 99 stats when hoodie applied

he's in the thunder now lmao

i never knew he was IN the thunder

People forgot how good he is

in the 2019 season hes playing in Houston

Well he put up 22.4 ppg and still gets smacked with a 79. Melo is the most unappreciated player...

When you got traded to the OKC outta nowhere

This is a solid start-of-cycle Melo. Don't sweat the details.

He's probably actually an Emerald and they dropped his Intangibles to keep him from hitting 80.

He has the raw tools you need to pour on buckets at this early juncture in the game. Strong midrange shooting in all respects, and also good athleticism for his size and strength. Nice post game for his position.

With the improvements made in the post game and triple threat moves, Melo has been set free to rain points.

D is adequate enough that, if you manual him and get a good contest on guys, people are not going to be shooting over him at will. Just don't leave him alone to do his thing on D because Melo gonna Melo and Melo ain't about that Defensive Life.

When Espn says that a rookie is better than you

No duo with hoodie?

Best gold card in the game and that's facts

HOW IS AL HORFORD BETTER THAN MELO????

Still waiting for the OKC Card

W right back at ya

melo on the okc now

He gonna pull up to Chesapeake Arena in a hoodie

now in Thunder, h will appear in Moments, i think

i dont understand this shit about melo he was a fucking 2017 ALLSTAR!

*insert something about hoodie melo for votes*

He on OKC YOOO

When you realize you where an 88 OVR two years ago...

Melo ain't getting no respect from anyone no more

MELO WILL ALWAYS BE THE GOAT

35 intangibles, why not just make him an emerald with higher intangibles

cause they wanna make him looked washed even though he isn't

best gold in the game, plays like hoodie Melo

No, Melo is trash in this game at least for me, he bricks wide open three is his corner hotspot

Put him at point guard

I was a fan of Melo, not Carmelo Anthony, Lamelo Ball