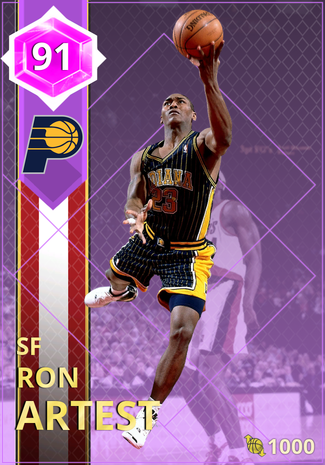 Good at O hard to tell on D

ANd ended up betting the wrong guy..so 0 all around vision and iQ

this is the best comment in the history of comments

93 strength, yeah he punched him pretty hard, and he wasn't even the guy that threw the beer. For Same

This is the Reward to choose if you want maximum long-term utility from your Reward. This Artest is good enough that he could justify a spot all the way through the end of the cycle. He's incredibly flexible, capable of guarding at 1, 2, and 3. Even 4, depending on matchup. And would be much better than most other wing defenders handling a 5, if switched onto that big in a Switch-All defensive scheme.

Unlike Ben Wallace, he can also dribble and shoot. Don't expect him to be a good shooter, unless you're one of the very few who shoot well with his animation. But, at the least, he can keep defenses honest.

His only issue is Badging. Not having HoF defensive badging keeps him from being a truly endgame elite card. But...we're talking Current Domination reward here. No biggie.

The slightly bigger issue is that 2K mostly just copied 2K17's Diamond Artest and repeated the mistake of NOT GIVING HIM DEFENSIVE STOPPER. He should have this. It's a big deal especially in the early stage of the game cycle, when people may not have any other cards with Defensive Stopper.

Yeah they changed his animations...it's now quicker and absolutely wet..man is insanely good

Shot's different, right? I think still a low crouch, but I think it's smoother. He's an ace for me. Shooting over 50% from outside. It's so weird.

One question, if you don't mind. Don't you think his defensive tendencies are a bit low for a defensive anchor? I mean, If I chose him, he would be my defensive anchor, but still I find his tendencies to be a bit lower than I expected. I follow you and I would appreciate your thoughts on that :)

You think his tendencies are low? I think they seem about as high as one would imagine. Compare him to Kawhi or other top defensive cards:

Thank you for the answer :)

I green with him so easy in the PD league man..he's so nice now..I wouldn't say low crouch that much it feels pretty normal to me..he's so good now

He does have defensive stopper

Thanks...wish I could edit. I typed "Stopper" by mistake.

What I meant to complain about is how Artest does not have Defensive Anchor.

I wonder about his release too. Last year it was initially bad. They tweaked it but it took a while.

Just played my first game with him. Only the hawks weekly challenge but his release was butter. 2 attempts from outside = 2 green lights. And his finishing inside was insane. I know not the best game to gauge the card in but in that like 6 minutes of game time he went 5/5 and 2/2 with a few assists and steals. Pretty impressed with him.

Thanks. I appreciate you posting this. I'm glad to hear his release is good. He's definitely the one I'd go for. Last year just had me worried. He was a beast once you got his release down but a lot of people gave up on it.

The tricky part is that many of us will have to choose without that information available ahaha!

Artest is pretty special as a wing defender, especially because he not only is he athletic and can shoot, he can also handle the ball. And he's crazy strong. He only gets replaced by guys like endgame Kawhi toward the end, as far as D is concerned.

But scoring PG's are aplenty. Which doesn't mean that Fat won't be very good. I think he will. I used his Ruby and Amethyst in 2K17 a bit. But Artest is special and is useful for a long period as at least a niche roleplayer.

Totally agree. Arrest is FAR more versatile. U could get away with using far lower rated PGs than Fat and get similar production, however there are very few, and likely will REMAIN very few cards in MyTeam - that can match the level of production Artest can provide.

lmao you actually came and did it W

I think that his value in Super Max will be going up because every one will have him. Makes me wonder if I should choose Lever instead ..

How do you get this card because I NEED it???!!

These kids about to catch his 85 hands

I'm gana get him and fat lever for my choices, all he needs is corner specialist

Got lever in current domination and I plan to get Ron in historic domination.

Needs Dyn. Duo with ben wallace so he can get 99 strength and 99 hard foul tendencies

Is he worth the extra 50 against the cap compared to Ruby Luol Deng?

Me too i dont know how to stop

Anyone there know how too throw free throws with him?
Ebers Shot i take from the line with him become a 0%

im on the last game of domination and I cant win!!!!!!

They nerfed his 3 ball to a 83 whenever you check his stats in game....

“Pauuullll!! I’m so sorry. To humiliate you on tv by pulling your shorts down! I won’t do it again”

Lets be honest. If you were super mad already then someone threw a beer at you, how would you feel?

artest sounds like arrest, and he shouldve been arrested when he punched that drunk detroit trash

They really just didnt give a shit about the card design this year, didnt they?

This the best domination reward by a mile... And that's sad cause ths card really isn't that great

not that good? He has 40 intangibles!

what??? 40 int, he is a diamond. He has almost max defense, great driving, speed and shooting

How ? It's a free amethyst.

how do you know it's a domination card? what are the other ones? Do you know the diamond ones?

Domination rewards are Artest McDyess and Lever. Some people already finished it

It's crazy how fast people get through domination

I have played 10 games of it so far

Crooked Ronnie made this card , fat lever and Antonio Mcdyess the domination and historic domination rewards. A very sad and evil deal. One of the worst myteam deals ever! Has to go!

Please dont do this all year lol

Don't do what? Could you be more specific

Please dont imitate the biggest embarrassment to the US since slavery.

They are the only people able to own casinos and they dont pay taxes. Seems like a fair trade off to me lol

You right killing 90 percent of an entire population and physically forcing them to walk a treacherous walk across the country on to a small reservation is a fair trade cause they have casinos and don't pay taxes. Except they still pay taxes and aren't the only people able to own casinos..

I was hoping you sensed my sarcasm

I never assume people online are being sarcastic. I just assume they're idiots. Just glad you weren't being serious lol.

I wasnt, I realize how terrible our past is. Even as a kid I thought it was fucked up how confederates were treated as heros down south.

Nah im just saying im from new england and u learn about how messed up slavery is and how confederates wanted to defend to keep it around. And then i go down south on vacation as a teen and see them glorifying the confederate army.

Robert E. Lee & Nathan Bedford Forrest were great men. Read up on them. There was more to it than just MUH SLAVES.

"the most remarkable man our civil war produced on either side" - Tecumseh Sherman about Forrest.

wtf r ppl arguing about this on a 2k site

Forrest was a great man, really? He was one of the first leaders of th KKK!

That's not even proven, and if you don't want to read within context that's on you. Easy to blame in modern times.