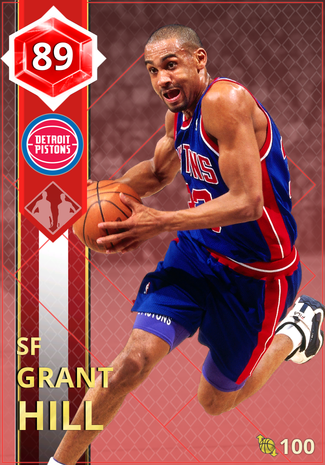 This guys couldn't been a legit Top 3 Small Forward all time - he had the athleticism, explosiveness, mental strength, playmaking, slashing, and had a great mid-range and underrated 3 pt shot. What a shame he fell to the death blow of injuries. :(

"This guys couldn't been" bruh what

Yeah sorry bro - I meant "This guy could've been" lol - sorry for the type - I was pretty tired. I'll the take L fr haha

Was the first SF I remember who brought the ball up the floor and ran the offense. Revolutionized the point-forward position.

Yeah I totally get that, Zem. He attacked that rim relentlessly and was such a great two-way wing.

It's shame to see that he's one of the forgotten NBA players because of how short of a time he was good for. But while he was healthy, he was half man half amazing

Oh yeah to clarify to y'all as well - I'm not talking Top 3 as of now, I'm talking back then, around the season of 99-00. Lebron, Pierce, Durant, etc. weren't relevant yet

Hill had better defense and had the mental toughness to hit more clutch buckets; was a better all around player and was a better leader. He had a bigger upside which was never realized - we know exactly where VC plateaued. Grant also averaged 26, 5, and 6 in his sixth year in the league, with 1.5 stls per game right before his major injury. He was set up to become pretty darn great. This is coming from a big time Vince Carter fan as well.

By the time he had the injury the first year he was in orlando, he was 28. He maybe would've averaged 23-25 ppg for about 4 more seasons and then slowly declined. Plus you also had to factor in that he played with T-Mac which hurt his stats

no he wouldn't of

Let's hear your argument against it then...

We never knew his full potential however - he got injured right after only his 6th season and was never the same. Who knows, maybe he wouldn't have gotten better from there, but we will never know.

I totally get you bro, but just putting it out there, because you never know - some guys keep improving until they are like 30-31. Also, to clarify, I was talking about Top 3 all time at the time, the season of 99-00. Lebron, Durant, Melo, and Pierce weren't around then.

who knows you cant predict the past's future

I doubt it. Maybe a little bit but it would only be for like 2 years and then he would fall off

dont take this card for Grant-ed, its finna be a cop

Imagine if he was on the Pistons when they won the championship, but he didn't get injured.

L to the universe for injuring this guy

Pray for Hayward. Injuries ruined this guys career now don't do it to Gordon. But Grant Hill was a beast

Shame he could hurt people really thought he would take MJ throne after he retired.

One could say he looks "over the hill"

yo 2k where the moments cards at???

Grant Hill could have been one of the GOATs but not only did injury hamper his career, but the Pistons franchise over used him and did not surround him with the proper talent. As a Pistons fan, it was great to see him play but we kept putting the wrong mix of talent around him. In an era that was fueled by centers, the Pistons could never get one to support Grant. His career here will always be overshadowed by the Bad Boys and his departure led to the Goin To Work Pistons of the 2000's. If he stayed in Orlando they would've had a monster squad with him, McGrady, and a cast of offensive players. Loved that he came back healthy for his later years, but he will always remain a Pistons legend despite his limited success.

I'll put Joel Embiid as a "Opening Night" because of the following:

Hopefully Embiid can play this whole season, send prayers everyone, even your religious prayers

What were his stats in his first career game?

Not worth the price the set will be

THIS CARD IS INSANE GUYS!!!! I had his diamond last year and he is EXACTLY THE SAME except for worse shooting and slightly worse in rebounding and defense! He is fantastic! If you want a guy who can stick on your team for a month or two, get Hill.

The dude was a beast and had a ton of potential. Too bad he used it on shitty teams

So sad that Grant got injured, him and tmac would have been so good together

but I wanna know if is worth paying 30-40k MT for sapphire Vernon Maxwell in order to get this card :(

well, actually I know it is not, but I'm arguably Hill's biggest fan among non-Pistons fans

Tbh If you are looking for a cheaper dunking small forward go for Sapphire. Michael Beasley for basically 1k . If you have a slightly budget go for Ruby Gerald Wallace at about 5k or even amethyst Michael Finley at 30k at Grant Hill's price range. If you are a fan then go for him but just be aware there are many better cards, especially shooting the 3.

What did this originally say

A beast in his prime during the Pistons days where he would average 21, 7 and 6 in his first six seasons at that time, some people have compared him to the young LeBron James before going to the NBA

when you about to nut

when you euro in bed

When you nut and she still sucking

I think 2k uses these suspect pictures intentionally. I feel like Ronnie picks the ones that give him the biggest boner

No, yall are just fucking immature