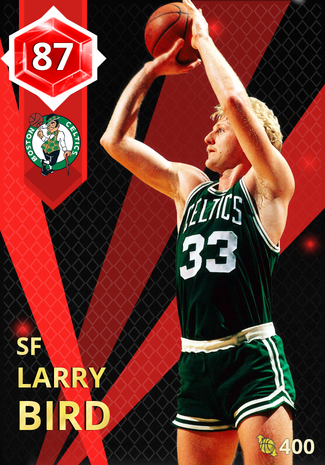 nvm, more like GG 2KMT because he's a Ruby IG

ok now im confused is he a ruby or sapphire

Now It is a ruby, they fixed it :D Simple

You ruined it, why not an 87 sapphire?

I thought I was trippin, it was a sapphire, then I reloaded the page and saw it was a ruby.

This card is a ruby in game though

the rating are different this year more like 2k16

hes a ruby in game

Said little bitch, you can't fuck with me
If you wanted to
These expensive, these is red bottoms
These is bloody shoes
Hit the store, I can get 'em both
I don't wanna choose
And I'm quick, cut a nigga hustle
Don't get comfortable
Look, I don't dance now
I make money moves
Say I don't gotta dance
I make money move
If I see you and I don't speak
That means I don't fuck with you
I'm a boss, you a worker bitch
I make bloody moves

43? he is playing before his mother was born in 1899. unless he freezes his corpse when he dies (rest his soul when it happens) and comes from his walt tidsney frozen things and breaks kyrie irving IIIII

this ain't a meme page

ThIS AiN'T A MemE PAgE

Dude don't u know to never feed the troll

I'm the biggest fan of Larry Bird but come on he isn't this good at age 43, 7 years off of retirement?

lebron cant shoot and larry can

Imma have to give you a W for the username, L for the comment

I support all Boston sports. I was raised on Pats, Celtics, Red Sox and Bruins.

lol. I'm almost the same way. Pats Sox and Bruins (even tho I don't really follow hockey). But in NBA, I'm a Bulls fan. My dad and brother are Celtics fan. Idk why I don't like them. I guess because when I was younger my dad more actively rooted for the Sox and Pats and got us into them, but not as much the Celtics. When I started getting into the NBA I loved Derrick Rose, so I became a Bulls fan.

The only reason I don't like the Bulls is that they are actually good. Especially when they had MJ. And I don't follow hockey either, but u can't mention the Sox or Pats without saying Bruins.

Hey yo, thanks for following me, bro. I followed u when I saw ur profile pic lol.

wait the bulls are not good

Oh whoops. Meant to write "were good" lol. Like when they had Jimmy Butler and Derrick Rose

ah yes
back when we weren't total shit

for like 2 years y'all were good but Rose's knees had other plans..

it's sad but true

This nigga 43 years old? why not a young version with a better shot. And better lungs.

The G.O.A.T. has returned

Why is post scoring and defense so low smh

no one is safe from Larry legend

they are not giving an HOF badges to a ruby. And its rookie Larry

Last year some of the current team collection rewards had HOF badges, like Horry for Lakers had HOF catch and shoot

card is actually a ruby, just checked in game. Card is not bad but wish 3 ball was higher. Going to wait it out till he gets cheaper

Finally I can afford Larry Bird

Better than his 95 amethyst from 2k16

Shooting too low. Unless they're gonna make a better Larry card with better stats

It’s a card from his first career game. Of course there’ll be more

I remember his best card two years ago having 64 speed, now his worse has 79, they have to decide what to do

Is this what is really listed on the card...? These kind of hot zones with those kind of shooting numbers.. He was wild retired by 1999 too... WTH...?

Larry Legend can't wait to add you to my all white team!

Also, maybe tyruss10 has an all black team too.

aka my main team. Not even kidding my "god squad" has no white players and I didn't plan it that way

Will be one of the best cards

All around acrd, release prob money

had a heat stroke looking at his zones

Now who else fucking their sister?

He deserves a better 3 point rating

I mean he was way too late to join the NBA, he could have been a legendary 80's player who would be among the best 3pt shooters of all-time. He could also have teamed up with people like Kevin McHale, Robert Parish, and Bill Walton. And don't forget his team could also have been rivals with a team like the Lakers.

He was, dude. He was a legendary 80's player. He was drafted in 1980. He is the greatest 3-point shooter of all time, he won the 3 point shootout 3 years in a row. And he did play with McHale and Parish. And with Danny Ainge and Dennis Johnson too. And he pretty much started the Lakers rivalry because he always would match up with Magic Johnson, and they beat the Lakers in the NBA Finals in 7 games, when Bird was named MVP. I'm the biggest Larry Bird fan ever, so you should probably do your research before you make comments like those. He is the G.O.A.T. Better that Michael Jordan and LeBron James.

yeah right. a gimmick that he won the 3 point contest 3 years in a row with.

Larry Bird is a better shooter than Jordan and LeBron. They didn't win the 3-point shootout 3 years in a row, did they? Bird is G.O.A.T.

Why doesn't it say that Larry Bird was a dynamic duo with Kevin McHale? Those guys were like brothers on the court.

i think its time to go back in and add some hall of fame badges to this card. if jason tatum has 4 as well as eric gordon. larry should have some too.