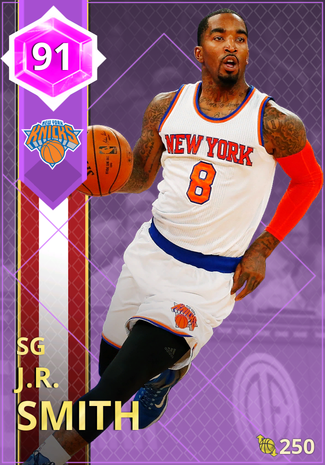 Return of the Henny God

Did Drunk J.R make this card?

Nah he was on the henny

The years dont matter to 2k

Fr tho lmao. This dude will take a contested off dribble shot from 42 feet

The Man who doesnt Shoot open shots
The Henny God
The Rhihana Killer
Lost 15 Million from elbowing Jason terry
The man with the "Pipe" in the DMs
The College Decliner
THE J.R Swish

My Grandfather was also named JR Smith, when JR played on the Hornets they were in OKC due to Katrina and being from OKC and in the freaking phonebook, my Grandfather was getting calls at all hours from girls saying "We love you JR" and fans called telling him all kinds of crazy things. He loved it. Mostly because it pissed off my grandma.

Surprised he has a shirt on

Him and TDPresents should be friends

why isn't it a picture of him untying shawn marion's laces

J.R. always on the henney

Little bit over power , i think

this is gonna be a glitch card

This card is gonna be a glitch, even better than last year's Amy

This card to deadly.

SO we are just gonna let no comments get any likes

of course he has a higher contested shot 3

j.r was definettley sober during this pic

Why does 2k think JR was a good defender at any point in his career?

Contest shot 3pt should be 99

JESUS he can shoot the lights out, play D, speed boost, fast a fck boi, and can poster you.

what was your first language... also have you seen those fake ass stats that jr has. The idea is to get people to open packs and want to complete the set. So yea, no shit they released an OP Jr

I love all the JR love this year

I was like << well, at least his shitty defense is going to make him playable against >>

it's still a bit early for this kind of cards, isn't it?

He can shoot the three since he's JR, whether is open, contested or off the dribble

A great finisher at the rim and even though he's 32 in this card, he still can dunk, and dunk on you + he gonna take flight

Solid defender, he's not gonna get crossed easily and the 85 steal can come in handy + 85 defensive consistency

He still has the speed, 92 speed can come in handy if you're going up against matchups that have lockdown stats such as Klay Thompson

Decent Playmaking, he can dribble the ball well, he has decent passing ratings, and he's only an SG, which is pretty suprising

Rebounding, nobody really cares since he's a SG

Really great all-around card! You can call this an upgraded 86 Kyrie Irving with better shooting and defensive stats, btw his badges are deadly as faq

JR Smith on the Knicks was a beast

He avg like 12ppg on the knicks, no he wasn’t

2k is so stupid bruh jr was never this good

how do you get this card

Wish he was back on the Knicks. We would be much better with him. His dunking was phenomenal.

How in the hell he has a higher ratted card that melo?

Cheesy Dunk packages, better speed than last years JR (still need a speed shoe tho). Good shooting (but no HoF badges thes year? C'mon 2k you better than that). Anyway this card is a cheeze. Y' all gotta get it. Even now that them bench boost cards price gone a bit lower.

The fucking Goat. Any time J.R gets an ameythyst you know it's going to be a beast of a fucking card! #3pointcheese

Henny GOD is killing people so far, even tho the ruby one s got better shooting badges.

I HATE JR HOW DO YOU NOT KNOW IF YOU'RE TIED OR NOT WHY WOULD YOU DRIBBLE OUT ARE YOU STUPID GO BACK TO NEW YORK YOU SCRUB!

look at his body, its glowing Drunk or not

The Pipe god himself is finally here...

Who remembers when this card was OP in 2k17?

lol all I did in domination was steal it with diamond rondo and pass is to either lebron, jr, or kemp for an easy slam. Plan b, get a pick for jr, and let it fly. Plan c, JR DONT SHOOT OPEN SHOTS!

ANOTHER NUTS IN YOUR FACE CARD....

but this time it could be Hennessy in your face.......

Didn't know jr was on the knicks last year

He was the 3rd best player on the 2017 cavs! Tristan Thompson, Iman, Deron williams, derrick williams, no show!!!!!!!

even if he was better than those four (which he wasn't) love, kyrie, and lebron are all way better

J.R. the type of guy to shot better threes while contested.

To bad he's on the Cavs, now he looks like he is terrible but he's great.

Lol how is his contested 3 better than his open 3?

PLAYS FOR THE TRASH ASS CAVS 2K GET IT RIGHT

Quit hating on every single player..

He got traded along side with Shumpert to the Cavs for 1/4 of a bag of chips and a empty soda bottle. One of the marvelous moves by Mr GM of the year Phil Jackson.

he was traded to the cavs

You're a fucking retard

how look at the stats

your the fucking dumbass

This card isn't from when he was 32. That's just what 2kmtcentral (Not 2k.) filled in for the card because they didn't really care/ think it was necessary to change it. This card is from when JR was 28 and won 6th man of the year on the knicks. It takes like 2 brain cells to recognize that.

This isn't when he was 31 years old with the Cavs. This is in about 12 or 13 when he was a fucking legend smh

im 40 mate and i speak facts, been around the nba long enough to know waz up

That's where your wrong old man