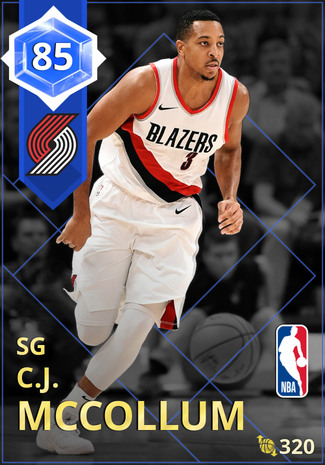 If he was in the east he is an All star

He's got a good shot to make it over Kemba and maybe Beal. No way Oladipo beats him out over more than half a season, he'll cool off soon. Wall, Kyrie, Derozan, and probably Lowry are the only locks ahead of him.

@drexler22 Huh?
I guess Oladipo did beat him off and didn't cool off

Derozan, Wall, Kyrie, and Beal are locks, and 6 guards are allowed so that leaves us with a group of around 5 players ( including McCollum in this scenario ) who could make a push for it. I think Kemba will kick it up and if D Howard and the Hornets keep playing well, Walker will be in. That leaves us with 1 more player. Keep in mind that this is a hot start for Oladipo, but he's cooled off a bit in these last few games. I think Oladipo will cool off considerably as the season progresses and he'll average around 19-21 points per game. McCollum will average around 23-24 in my opinion and the CRUCIAL factor is that McCollum will shoot a much higher percentage from 3, most likely 5 or even more percent more than Oladipo. He is also the more efficient scorer overall. That means that McCollum is the All Star selection, over Oladipo.

Bledsoe could be a fringe as well now.

Thank you someone who agrees

Him and lillard are both underrated so
Damian lillard #NBAvote
C.J McCollum #NBAvote

one of the best ingame jumpshots imo.

He'll splash a ton of threes just due to his release

His diamond last year was amazing, largely because of the release. Hope he still has the same one this year.

Was this for his clutch performance against the grizzlies