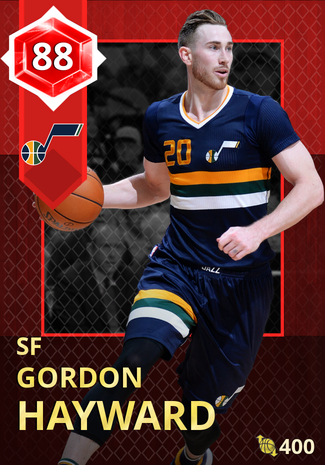 RESPECT FOR THIS DUDE, THE TRUE WHITE GOAT! I MAY BE A CAV'S FAN BUT MAD RESPECT

Even though that’s dead asf, it kinda funny

Who didn't respect him in the first place?

What, he broke his leg, and now he's Jesus?

Don't worry about the downvotes. Nobody on this damn planet disrespected him in the first place this comment was purely for upvotes.

thank you man, tired of this 2K pandering

That’s what they say Xans don’t make you

The Jazz have fans?

As a Jazz fan, I still respect the guy's playing ability. Just wish he would have told the Jazz earlier, while there were still SFs available.

Imagine what the Celtics would have been like WITH Hayward. Unfortunately we don't get to see that this season, but we'll see next year

White people can play too :)

no one said they couldnt

He'll be back coms playoffs

he will have a healthy and speedy recovery

it'd be great if he could come back by march...

packed him instead of amy TMac and when I did get an Amethyst it was coach Tyronne Lue. I gotta say that this ruby is pretty good because in 2 games he hits the three pretty well and his driving dunk aint too bad. A nice SF that I have on my bench unit behind ruby LBJ who starts

Is that 86 ball control i see? This card will be good with "ankle breakers"

Cause he broke his ankle

Gordon Hayward going back to the Jazz in 2020 confirmed

PRAYWARD This man will return strong and talented as ever wearing green for the 18-19 season hold the hope.

how tragic it must have been for him to be injured... hope he comes back better than ever

I rememer when this guy dunked on Giannis twice in the first quarter last year. Get well soon Hayward.

why are they saying he cant dunk. 2k is racist.

I’ll miss him on the jazz

This is a Jazz card but all I seem to see is people talking about him with the Celtics lol
But FR, s/o to this man and everything he's been through, especially from the worse side of us Jazz fans. Sad to see him go, but that's just how the business goes sometimes.

Gordon Hayward returns to the Jazz in 2020

I was looking forward to seeing him dunk on more people but I guess that injury leaves room for improvement.

Love this guy, realy hope he comes out and keeps evolving

After the injury, He will have the same stats as Shawn Livingston.

Age 30? Must be in hypersleep

after the injury he will rise a legend

before he was injured

Ive tried and it doesn't work because he cant rebound

I use Marvin Williams for schedule mode and domination, he is a pure stretch cleaner, no chance he gets a ruby hahaha

One of the only decent white guys still playing, such a shame that he got injured on OPENING NIGHT, so unlucky, it's pretty insane how times have changed, in the 50's white guys were dominating the league like Pettit, Mikan and Cousy, now darker guys absolutely smash the rest of the league

A statement that shows your ignorance of US History and the history of the NBA. Discrimination and bias was a major factor in their dominance of the early 1950s, until 1957. Bill Russell, Wilt Chamberlain, Elgin Baylor, Oscar Robertson. "Darker guys" as you put it, had to be twice as good as their white teammates in order to get an opportunity to play..... and they still didn't receive the same treatment. please do your research.

You are absolutely right, sorry for that, I misunderstood

I'd say they're the same

How ? Kd is not that strong in real life. You can tell Gordon Hayward has been in the weight room

I don’t think you know how 2k card systems work

I do know I just think its intersesting

Also I know its a jazz card