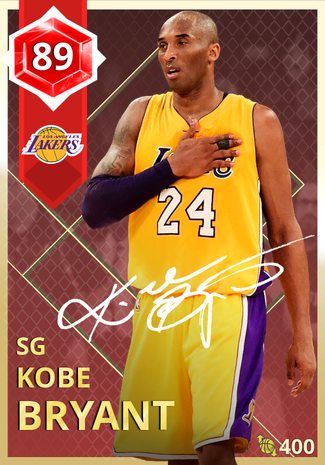 Good, but hoped for better.

Could be better but still good

Dropped 60 fucking points in his last NBA game, nobody and I mean nobody will top that

well if somebody shoots 50 shots like he did they could

It actually doesn't work like that or people would be scoring 60 all the time. It's not easy to put together a game like that, I don't care how aggressive you are.

That would be you, actually.

The more you shoot, the more fatigue sets in. The more you score, the more the defense will focus on you. It's just not that easy. Especially for a 37 year old, after getting his Achilles blown out.

how is that relevant and it is

it's low, but it's not as low as a percentage everyone over exaggerates it to be.

also how is that relevant

If you shot 50 shots at a high percentage you could

that's what ive been saying tho

Kobe's not even the best Laker lolol

Don't get me wrong, I think Kobe is top 10 all time and the second best SG to ever play. BUT in my opinion, I cannot realistically put him ahead of Magic, Kareem and Wilt...

Kareem and wilt weren't in theri prime on LA

Literally the dumbest thing I’ve ever laid eyes on. Kobe who spent his entire career with the Lakers, is the best Laker, but worse than Magic, who also spent his entire career with the Lakers. Your argument about him winning a chip when Shaq left as the best player is so fucking stupidly specific, of course no ones done that. @RAWRXDLMAOROFL is right you contradicted yourself at least 4 times in 5 points lmfaoo

nah they both are the best i think

By definition, they cannot "both be the best".

RIP anyone who did the rim rockers set

To be fair, this ruby isn't as good at dunking. But... Free is free.

the duo with mj makes that 1 legit

na I wish tho but as hard as it is to say if he does come back it shouldn't be to the lakers. maybe the pelicans or heat would be a good fit

fuck, the thunder will take him. I mean pretty sure they would play now days bill Russell at SG over bloody Roberson....

If he does come back it should be to the Lakers, Lakers all day he was a Laker all his career. Fuck the Pelicans and the Heat.

let's be honest...this is the only signature card we'll be able to get

emerald melo is still on the board too lmao

wow reading this in february is hilarious. every signature card is under 100k and the amethysts barely go for 10k. LOL!!!

how do we get it?

the ruby is a challenge where you have 8 Lakers players and have to score 60 with someone. The others are in the packs

Does anyone know what each system proficiency is for him?

thank you. idk why 2kmtcentral arent showing system proficiency in the player bio

This is old KObe

Top 6 of all time

hahahah he is the best of all time

Don't know about budget, he's gonna be going for more than most diamonds more than likely. (Don't know how rare he is, but that's just my initial guess)

Didn't realize that, how long is the challenge around for?

uh it's gonna cost a lot to get, unless you got the Derek Fisher

why is it that his nickname is kobe on all of his real cards, but his nickname on the historic cards that aren't available is the mamba?

How you get this card?

I dropped 85 with this card and got the amethyst, mind me this card CANT DUNK AT ALL. not even on a wide open fast break not even lying my dudes

Can this card be auctioned or no?

sold mine for 20k. Not worth keeping in my opinion.

This may be one of the better ruby's to keep on your team right now. In a couple of days he won't be attainable anymore but anywhere through the AH and people love Kobe.

This f*cker keeps getting injured in my challenge game

ikr it was insane

For 2k18 these stats are really shitty. Could have been a gold card. Yet, there is no difference in speed with ball or dunking from the Amy Kobe to the Diamond Kobe...Fuckin' 2k...

SO fucking sexy with his bald head, i rlly need him to penetrate my booty hole

What the fuck is wrong wit you

lebron is the goat

Just give him a dunk shoe and he'll be a beast

Oh it's moments card for 60pts vs Jazz?

Without looking this up i know exactly where this pic is from. Kobe gets the ball throws it down to Jordan Clarkson for the dunk the camera shows kobe and thats where this picture came from.

anyone who says kobe last game was only good on stats and he was fed the ball..... watch the last quarter and tell me you have seen someone else that skilled, the way he mastered some of the most simple basketball moves with the jump stop and pump fake is what made this guy unstoppable. he had the single best footwork of any player ive ever seen let alone as a SG and the only other person close to him in that regard is MJ
(not saying hes better then MJ. he was just better at them things I listed them MJ)

Yeah he dropped 60 points in his last game ... on 50 shots lol he's an all time great, 2nd best scorer the league has ever seen but that wasn't that impressive. And please stop saying he's better than Bron, please.

Thats why the card is only a ruby...

He could barely dunk in his last season. Not disrespectful at all.

yeah, they gave the dunking stats to the pd kobe- which unfortunately is going to be pretty much impossible to get

They all have 98 driving dunk but this one