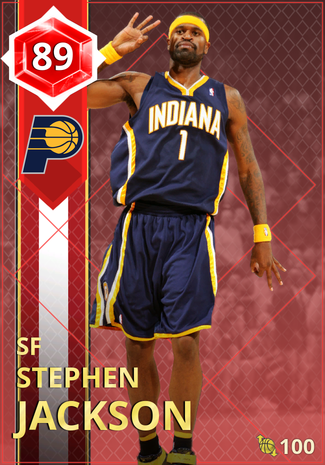 I once got a selfie with this guy. He’s a cool dude

He gave me 7 pairs of jordans irl. Sjax is the man!

the first round all year where i atleast have a chance of getting the reward and its not a amethyst..

He's just going to be a catch and shoot guy on my squad...

Where you from? Nowhere

When everyone found out he was gay: D-Fence +1

I need this card but how does Superman work? I just started 2 weeks ago I got a 90 overall team and 100k from sniping cards but I’m in the ruby league right now

Next reward is ruby Zydrunas Ilgauskas, you hear it here first.

There is a ruby Ilgauskas in the market. I don't think he'll be the reward

My bad, I meant Amy IIgauskas. It's either him or Antawn Jamison.

You were right. How did you know.

I work there lol

What's next? Why is Ilgauskas not updated.

I will post the next reward under the Ilgauskas card lol

Just another card I won't use. SMH

Lol, you def will use the last two rounds rewards of this season.

The only thing you need with Reward cards is Wilt Chamberlain. I had a ruby team, I was winning with them against people with 90+ players like McGrady, Granger etc. Since, I bought Wilt he became my leader averaging 20+ PPG and 9+ RPG even when some of my games were disconnected. Basically he's averaging 25+ PPG 12+ PPG for sure and if you play slow and keep the game under 55-60 points, you'll win. I have Amethyst Kobe and I have defeated people with diamond Kobe, Penny, Dwight, McGrady, Granger etc.

Stephen Jackson is from "None"? I wonder where that is...

look at his right hand

So Stephen Jackson is as good as a dunker as Dr.J?

if his release is like how it was last year , this card will without a doubt be incredible

Wanted warriors Jackson but this is good too

[insert hold up joke for up votes]