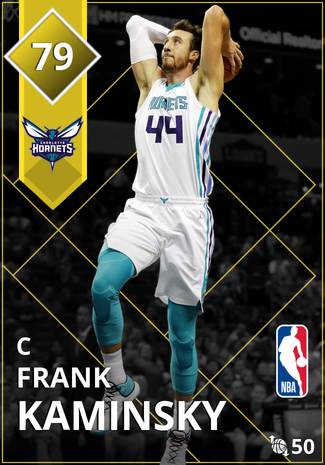 frank the tank choked in the playoffs and will never be good.

Good for Domination but wtf is that defense

42 strength got me shook

domination!?! I completed that 36 months ago

Good for you bud

His defense is booty tho

or bring him out when no one expects him at the end of the game to hit a 3 and give him limitless range on gold.

He actually would be really deadly that way

just got his jersey retired by Wisconsin RESPECT

Ayy Wisconsin getting some love

That nickname sounds so boss

Wow he can only shoot

jeez that three ball tho

frank the tanks just rolling right on through

his face is the face everybody has when dunking in warmups

Going to be cheese as fuck with that 3 ball

Tbf Kaminsky has had way better games this season and its about damn time they give him a card. I agree they sleeping on dunn and mirotic tho.

You haven't seen him play at all this year. Look up his stats and last few games

We are sleeping because you're team has about as much talent as the Grand Rapids Drive. Give me a break. You have literally not one thing exciting goong for you to a casual sports fan or even an NBA fan so please spare us all with your Bulls-hit.

Let's take a quick little look here. We're in the first year of the rebuilding process with players who have already shown potential. Kris Dunn has turned into a very solid playmaker who can still score and defend while Lauri Markkanen is arguably a top 3 rookie. Zach Lavine is coming off of an acl injury he suffered last season where he averaged 19 points per game on a team with ball dominant players who put up 24 and 25 points per game a piece. On a team with no superstar, Zach Lavine has free reign to go out there and kill it. REGARDLESS of whether our team is GOOD OR NOT, it's a MOMENTS card which is specific to ONE good performance. You can be on the worst team in the world and have a good performance. I don't understand why you're so against the concept of them getting one. I'm sure if your team was rebuilding you wouldn't be saying shit. Please, you're out here acting like the fans have control of whatever the fuck the team does. Shut your ignorant ass up.

Lmao I'm salty? You're the one who has to write me a 5 page paper on why Kris who and Lauri huh need a moments card. No one cares about them that's my point, and either should you. But I don't got much room to talk I am a Pistons fan so we can leave it at that. I was being sarcastic you were clearly very offended

It's hard to tell when someone is joking over the internet. But regardless, I'm glad you're not a complete asshole like I originally thought.

6 games ain't shit bro it's the NBA you can win 6 and lose 6 straight won't matter come playoffs time when you don't have talent.

Oh and dont forget the fact you guys are 9-20 and half the teams you beat forgot to come play because you're the bulls.

You're the saltiest person ever damn. I'm out here talking about 2 players who i think deserve cards for A SPECIFIC PERFORMANCE and you're out here bashing the Bulls for no reason. This is the first year we've been bad since 07-08! WE'RE REBUILDING BRO CHILL THE FUCK OUT. We're not gonna figure everything the fuck out after 1 year. And you talk about there being nothing exciting to CASUAL fans about the Bulls. That's because casual fans care about winning and have little basketball IQ so they can't see all the young pieces developing in ONCE AGAIN their FIRST FUCKING YEAR of a rebuild.